That said, some of the stepbacks are similar to the clinch covers we as readers have become accustomed to seeing. Two of the stepbacks feature heroes and heroines in various states of undress in the outdoors, a staple of the old-fashioned “bodice-ripper” type cover. While three of the stepbacks feature couples in bed or near a bed, there seems more of an emphasis on lush romanticism than overt sexuality. And, in another change from last year, when there were three montage stepbacks to choose among, there was only one in this year’s slate.

The runaway favorite in the Historical with Stepback category was An Offer from a Gentleman. Those who hadn’t read the book were intrigued by the mystery and romance of the cover.

Like many readers, Malvina found the coach a major selling point: “I loved the misty background and the coach. The colors are soft and beautiful, and the embrace is romantic.” 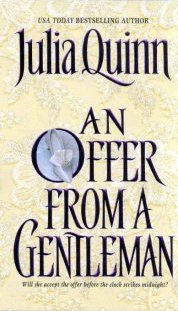 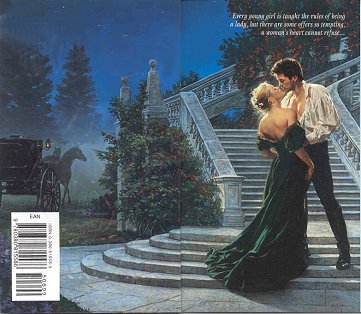 Many readers who read and enjoyed the book loved the cover not only because it was beautiful, but because it was an accurate depiction of the Cinderella theme of the novel.

Coverballot’s Mary Lynne had this to say: “This cover depicts the Cinderella aspects of Quinn’s story so well. The slipper, the carriage, that staircase – all of them relate to the fairytale in a nice, subtle way.”

Coming in a somewhat distant second was Suddenly You. Those who voted for it liked the two-page stepback and wished there were more of them. Several readers also appreciated the fact that the hero and heroine actually had their clothes on. 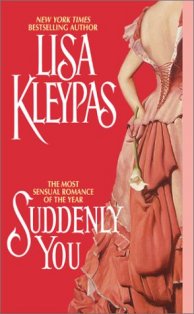 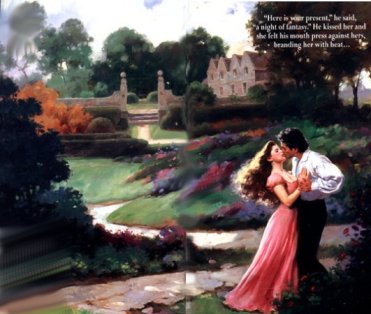 Carol found most of the front covers in this category rather weak, but thought that the stepbacks were stronger. She was also in the “less skin” camp: “The dress on SY also looks authentic and, best of all, the hero is keeping his shirt on while outside on his estate, a likely turn of events!”

The Protector was in third place. Several readers commented on the attractive use of color, and the symbolism of the sword entwined in flowers.

Laura said, “Stepbacks are an attractive way of combining a ‘presentable’ cover with the suggestive poses so beloved of cover artists. The Protector in particular has good color, attractive & appropriately dressed models, and uses the space well to convey a sense of the type of book it is.”

Reyeusela also made The Protector her choice: “Oh my. Madeline Hunter has been the luckiest woman alive when it comes to covers. The people are so life-like and natural, and I love the mini-war scene at the bottom of the stepback.” 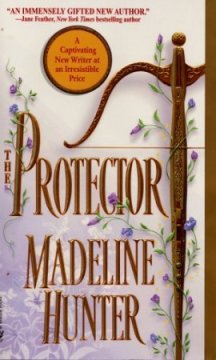 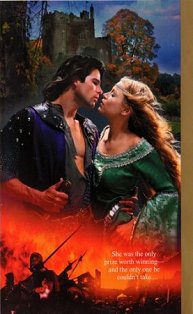 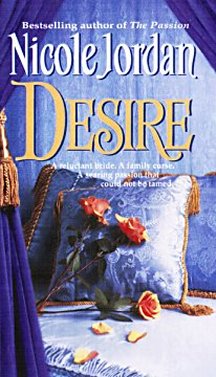 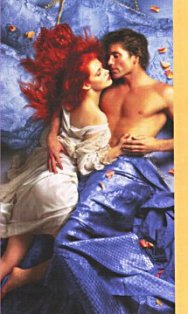 The fourth place choice was Desire. Reader Jennifer was one of several readers who noted that author Nicole Jordan has been very lucky in her covers recently. She said, “I love that they’re continuing this theme with Ms. Jordan’s books – there’s something so sexy about rose petals scattered over a bed…”

Number five was The Prince’s Bride. Although a couple of readers noted that they liked the colors or the secluded pose, the real selling point for most was the heroine’s dress.

AAR editor Marianne was among this group: “The Prince’s Bride got me because of her dress. I just love her dress.”

Coverballot’s Jaycee shared her opinion, and noted that she loved this cover the moment she saw it: TPB is so romantic, from the soft lovely colors on the front to the crown with the rose she’s holding on the stepback, to the stepback itself. I love the dress, in fact I lust after that dress. LOL!”

Coming in sixth was All About Passion. Rose liked everything about it, including the couple and the background.

Author Tina St. John chose it because she liked both the front and the stepback, which wasn’t something she could say about the other entries. She found both “beautifully done.”

The Bridal Season was the seventh place choice, and it was another popular choice with readers who like their hero and heroine clothed.

This comment from Kelly was fairly typical: “They’re wearing their clothes. All of their clothes! Even a hat”

Tempt Me Twice was the eighth place choice. Those who chose it liked the candlelight and the mood.

Vivien had this to say: “The cover creates a very nice atmosphere – candlelight, a cozy bed, gauzy fabrics, warmth and sexiness. I also like it that for a change the models aren’t facing each other and don’t have that ‘ravish me’ look of most cover models.”

Seize the Dawn came in ninth. Again, readers mentioned their preference for heroes who are dressed.

Charise likes clothed characters because “the clothes set the period.” She added these thoughts: “This hero could reasonably be shown half-naked, as it is a bedroom scene, but I think this choice is more unique. I also like the fact that this hero does not have a poofy, modern, blow-dried hairstyle.”

Last was Princess Charming. Several readers liked the front cover, but didn’t care for the stepback.

Michelle voted for it because she found it to be the least objectionable of all the options.