Elisabeth, Empress of Austria and Queen of Hungary, has been often maligned and compared to that other very famous royal woman of our times, Diana, Princess of Wales. Although they shared similar obsessions with their figures and have both been described as young, naïve women who didn’t know what they were getting into when they married, there is more to Elisabeth than the two words usually associated with her: Beautiful and Mad.

]]>Support our sponsors Born on Christmas Eve 1837, Elisabeth was a Wittelsbach, and a Duchess in Bavaria. Her parents, Maximilian and Ludovika, allowed her much freedom during her childhood, which in hindsight might be considered a mistake, but since it was her older sister Helene (known as Nene) who was supposed to marry well, dynastically speaking, Elisabeth was allowed to do as she pleased.

In 1853, when Elisabeth was sixteen, she accompanied her mother and Helene to Bad Ischl, where they were to meet their cousin, the 23-year-old Emperor Franz Josef. Helene was the intended bride, and indeed, Franz Josef wasn’t supposed to even see much of Elisabeth. One account has an impetuous Elisabeth bursting into the “grown up” dining room where Helene and Ludovika were dining with Franz Josef. She realized the enormity of her faux pas, but Franz Josef had seen her and been instantly smitten. Eight months later, on April 24, 1854, Elisabeth and Franz Josef were married in the St. Augustine Church of Vienna, with festivities lasting over a week. Despite the lengthy preparations and teachings Elisabeth had received for her new life as Empress of Austria, nothing could prepare her for the rigidity of the court – or the disapproval of her mother-in-law, the formidable Archduchess Sophie (Ludovika’s sister and Elisabeth’s aunt), who had wanted the more even tempered Helene as wife for her son.

Sophie found much wrong with the still childish Elisabeth, who began to feel increasingly caged in by the court etiquette. Despite Elisabeth’s growing unhappiness, Franz Josef remained unwavering in his love and devotion for his wife, and the couple had four children: Sophie (named after you-know-who), Gisela, Rudolf, and Elisabeth’s favorite, Marie Valerie.

Elisabeth began to travel, each time farther and farther away from Austria, seeking any form of escape. Possenhofen, the home of her childhood, Madeira, Corfu, were all places where Elisabeth sought to regain some of the independence of her younger years. Of all her children, Marie Valerie was the only one Elisabeth felt close to, but it would be Rudolf who would bring enormous grief into her life.

Much to Archduchess Sophie’s anger, Elisabeth took up the cause of the Hungarian people and was partly due to her influence that the Hungarian Compromise was achieved. Sophie, of course, saw it as Franz Josef being unduly guided by his wife. In Hungary, however, Elisabeth became much loved, and the couple was crowned as King and Queen of Hungary on June 8, 1867.

In 1881, Rudolf had married Princess Stephanie of Belgium, but the marriage was an unhappy one, and his only solace was his lover, the very young Countess Mary Vetsera. On January 30, 1889, a despairing Rudolf shot Mary dead and then killed himself, at his hunting lodge in Mayerling, a tragedy from which Elisabeth never really recovered. “Entrusting” her husband to an actress, Katharina Schratt, Elisabeth began to travel even more around Europe, usually under the name “Countess Hohenembs.” It would be on the shores of Lake Geneva where she would find death, at the hand of Luigi Luccheni, an Italian anarchist who had found out about Elisabeth’s visit to Geneva via a newspaper. Luccheni stabbed the Empress on September 10, 1898, as she walked toward the waiting boat along with a companion. The wound was so tiny that the blood leaked out very slowly and at first, Elisabeth did not realize the extent of her injury, but then she collapsed on the boat and soon after, died. Luccheni had no real reason to kill Elisabeth, he’d meant to kill the Prince of Orleans, who was not in Geneva, so Elisabeth was at the wrong place at the wrong time. While serving a life sentence, Luccheni hanged himself. 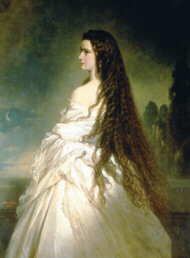 What remains of Elisabeth of Austria’s life? Most famously, these magnificent portraits by Franz Xavier Winterhalter.

The portrait on the left is perhaps the most famous of all of Elisabeth’s portraits, in full court dress and with diamond stars in her hair. It is even more magnificent up close. Franz Josef’s favorite, however, was the portrait on the right, a more informal picture of his beloved wife with her hair down, the portrait he kept in his study long after she died.

Was Elisabeth beautiful and mad, then? Beautiful she was, although photographs show an average-looking woman, but all who met her commented on just how incredibly beautiful she was. She was also very vain. Her hair was very long, and the maid who combed it every day had to go through great pains so Elisabeth wouldn’t see the hairs that inevitably fell out. She dieted constantly and exercised strenuously, be it horseback riding or using weights and her exercise apparatus.

Was Elisabeth mad? While she undoubtedly had some problems, Elisabeth wasn’t crazy. She was merely too young and unprepared for what was coming. The Wittelsbachs were reputed to have a melancholy streak in them, and add this to being transplanted from an idyllic childhood to a stern household where she was nothing more than a continuing disappointment to her mother in law and the court, and Elisabeth’s wish to escape was understandable.

Vain and immature, glorious and incandescent, Elisabeth of Austria remains the stuff of legends. A visit to the Kaisergruft (the Imperial Crypt) in Vienna will lead you to Sissi’s grave, usually covered with flowers. Postcard racks everywhere bear cards with her image, and the musical based on her life was a sellout. The most famous Sissi movies, a trilogy, had actress Romy Schneider in the title role, and were a very romanticized account of Elisabeth’s life, a life sadly spent in search of happiness.