You picked this one, so here it is: Welcome to Temptation by Jennifer Crusie.

Senior Reviewer Jane Granville and Reviewer Abi Bishop took on the authors iconic romance  and had very different reactions to it. In fact, they have the kind of diametrically opposed points of view that should make for some spirited discussion with our readers when we take the book club live.

So, join us when we discuss the book  and your reactions to Jane and Abis thoughts  this Sunday, November 15th at 4 p.m., eastern time. A link will be posted on the AAR home page and on the message boards so youll know where to find us. Hope to see you then. 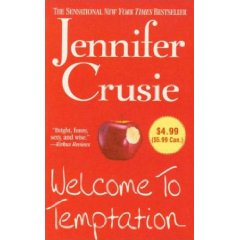 Jane: I hadn’t read Welcome to Temptation until last week. I’d heard about it and come across vague references to Sophie and Phin, but had just never gotten around to reading it. I didn’t think it was perfect, and I found myself pointing out flaws as I went through, and yet I couldn’t put it down. I think this is one of those books that, while there are parts I don’t like, the book itself has some spark, some essential quality that just works for me. Abi, I know you didn’t like it, though. I guess WTT didn’t spark for you.

Abi: No, it definitely didn’t spark for me. I found the characters extremely silly – not just the main characters but their extended families and, in fact, much of the town. When they weren’t being silly, they were being unlikable (I am in the morally ambiguous characters are not romantic camp, so Phin’s odd ideas about what constitutes cheating and Sophie’s family’s decision to cover up the death of a man were death knells for me). And speaking of the dead man, there were too many unrealistic and farcical elements for me to take seriously things that perhaps were supposed to be more weighty.

Getting specific: Sophie is often described as a modern romance heroine – independent & strong, etc. But her “You never even said I love you” line to Phin is classic whiny heroine. Not to mention a What the Hell, Crazy Lady? moment as they’d known each other like, what, a month if even that long?

In fact, Sophie never came across to me as strong, independent, or modern at all. She needed saving just like any other romance heroine, and she needed sexual saving too as she had the obligatory sexual chump of a boyfriend. It appears only Phin could give her an orgasm she did not have to work for.

But to keep things brief and moving on to the other half to my “this book has no spark” coin: Crusie’s writing drives me crazy. There are too many he said, she saids not to mention and then x, and then y, and then z sequences. They always brought me out of the story.

I actually think my displeasure with WTT is heightened by the fact that it’s supposed to be some great rule-breaking romance when I see so many rules not just unbroken but perpetuated. It does not, for me, live up to the hype. On its own, I would read it, roll my eyes while reading, finish it, then promptly forget it.

Jane: I don’t know that I’d consider it a “rule breaking” romance, nor a particularly realistic one. At first I was a little turned off by the exaggerated craziness of the characters, but as I got into the book I began to take it for what it was  a somewhat farcical set-up around a real romance.

I also had some issues with the writing style  the same problems you did, Abi  but I also just love Crusie’s voice. I love the sarcasm and dry wit, the snappy dialogue, the way she can make simple statements say so much. I think her dialogue builds relationships so well  both between Phin and Sophie, Sophie and her siblings, Phin and his daughter, and Sophie and Dillie.

Speaking of Phin and Sophie and Dillie… their interactions were my favorite in the whole book. I just think they were so cute together. Is it possible to have family chemistry? Because if so, the three of them definitely have it.

Abi: Definitely we are all imperfect, and I wouldn’t want the characters to be without idiosyncrasies and faults like any other person, but for me, Sophie and Phin’s reaction to their sexually orgasmic interlude on the dock caused me to lose respect for them as characters. If I recall correctly, Sophie called the boyfriend (BF) to release her sense of guilt and Crusie, probably to lessen the feelings of ire that may have been running through some readers, makes the BF into an unfeeling, blinkered chump, making it easier for anyone who may have been distancing themselves from Sophie to understand just what she’s dealing with – a BF that’s just not right for her, not like Phin is right for her. But, Sophie has known things weren’t jiving with her and BF for a long time before she came to Temptation. Break it off and move on with life. But she didn’t and why? Though BF was overbearing, he took care of her.

One thing I did like about the book and agree with you on is that Crusie is a great character conversationalist. The dialogue always feels very, very real. And that’s why in the face of all that realism I just couldn’t “get” the farcical nature of everything else. Maybe my funny box is wired differently, but I was completely unable to laugh off the decision the three siblings made with respect to the dead guy (whose name I forget). I know it’s supposed to be over-the-top and unreal, but I couldn’t take it at face value when what we’re learning about the characters (the younger sister taking Sophie for granted, Sophie putting her family first always, the brother saying that she needs to let go of them, etc.) are real issues for Sophie’s character development.

Jane: I figure if Sophie forgot she had a boyfriend, she wasn’t particularly involved in whatever relationship may or may not exist. Sure, she should have ended things before, but I wouldn’t put what happened on the level of infidelity in a committed relationship.

Abi: Well, the BF thought himself in some form of committed relationship even if it came across as more doctor/patient rather than BF/GF. For him, it was a relationship. But I get what youre saying, though.

I think I forgot to mention that I liked the little moments with Dillie and her Granny. It stopped Granny Lady from being a total cold bitch to someone who can feel deep love. Just like that super-tanned lady who wanted her daughter Rachel to marry Phin.

Jane: Yeah, probably not the best life choice on Rachels part. I liked her, but didnt like Leo. It certainly was a unique pairing, though.

Obviously we had different opinions of the book. And, actually, I can see where you’re coming from most of the time. As I said earlier, I don’t think the book was perfect. However, I think Phin and Sophie had such wonderful chemistry, great conversations, and little romantic moments, that Welcome to Temptation is a keeper for me.

Abi: I think its quite possible that a book that would have been a forgettable C read for me has turned into a memorably disappointing read because the online romance world is so full of positive reviews of this book. But, as you said: Chemistry, conversations, romantic moments  theyre all there and Im glad you made me remember all the ways Welcome to Temptation is a great romance, even if it will never come close to being a favourite of mine.