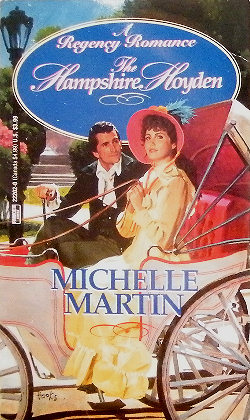 How I love this book! I have read and re-read it until my copy is falling apart. Michelle Martin’s writing sits solidly in the traditional Regency milieu with a lot of witty repartee thrown in. She wrote scarcely a handful of such books, and while they’re all superb, The Hampshire Hoyden is the best. From the moment the characters are introduced, they never cease to entertain. There’s not a dull moment to be found in the midst of hilarity, silliness, dueling bookish quotations, an outrageous plot, and a slow-developing, heartwarming central romance.

Katharine Glyn, a self-acknowledged antidote of five-and-twenty, is the unexceptional chaperone of Georgina Fairfax, an eighteen-year-old diamond of the first water. The two women live together in the Fairfax home and are close friends. Georgina’s immense popularity means the women are out most evenings.

“Your popularity, Georgina,” Miss Glyn calmly stated, “has forced me up into a level of society I cannot enjoy. To regularly consort with people filled with their own self-importance would drive a saint to homicide…and we both know I am no saint. I eschew the Wildings’ rout. I long to embrace Dante, Swift, Johnson! I’ll not be denied.”

Partway through the season, both Kate and Georgina meet men who capture their interest, and while Georgina throws her heart over the fence, Kate is far more circumspect and made of sterner stuff.

For Kate has had a prior brush with love – unhappily so. She was once Lord Falkhurst’s fiancée, whom he abandoned in her teens when he found out that her newly departed father had left her landless and with a diminished fortune.

Despite that experience, under the aegis of Georgina’s parents, she comes to town to make her come out. But her outspokenness and countrified manners don’t meld well with the haut ton’s exacting strictures, and she’s laughed out of party after party. Her arch nemesis is Priscilla Inglewood, whom she labels Perfection Incarnate.

After that debacle of her first season, Kate dons the mantle of an unmarriageable but highly respectable spinster. Her reputation is hard won, but proves useful when Georgina’s parents pass on but Georgina chooses to remain in her home with Kate as her companion rather than move in with her guardian. Her guardian allows her to do this because he has unmarried daughters who would be quite cast into the shade by Georgina’s beauty.

So back to the ball… Kate meets Lord Theodore Blake, a marquess and a knowing one, and Georgina is introduced to Sir William Atherton, a former soldier and a widely acknowledged Adonis. While Kate acknowledges to herself that Lord Blake is a handsome exquisite, watching him stampeded by the matrons, who are trying to unload their unmarried daughters on any worthy and unsuspecting fellow they could find, she concludes that he’s tedious and less interesting by the minute.

And yet a whole week goes by in which she’s increasingly entertained by what he has to say. That all comes to a screeching halt when at a rout, she finds out that he is the heir to the Duke of Insley – and that Priscilla has expectations of an offer of marriage from him.

“A marquess,” Miss Glyn said. “Heir to Insley.” She shook her head. “How could I have been so blind? Priscilla Inglewood is a fitting revenge. And yet, I think I must pity you. How dreadful to be made into a duke! How any parent can be so unkind as to thrust upon an unsuspecting child a centuries-old encumbrance reeking with dust and obligations, I do not know. I do feel for you. You need uplifting, and I know just the thing: a petticoat. You are fond of them, I believe.”

“You’re not fond of petticoats?”

“Oh, dear, you mean my terminology was wrong?” Miss Glyn anxiously inquired. “Not having any brothers. I often get the cant terms quite muddled. Is it garters? Corsets? I have it, shifts!”

In the meantime, while Kate is funning, Georgina is throwing herself into love with reckless abandon. Sir William, this. Sir William, that… Kate watches her flutterings with amusement and a jaundiced eye.

She could not understand why women fell in love with men, for they were invariably hurt and disappointed by their objet d’amour. Either the courtship went well and the marriage was a disaster, or the courtship crashed on the rocks of masculine indifference or cruelty. Thank God, thought Miss Glyn, that she was too experienced to allow such stupidity to besiege her.

As the story unfolds, Kate’s fall into friendship and thence into love from this pinnacle of decided opinion is delicious to watch.

The best thing about this book is the idea that you can laugh your way into love. Many romance stories assume that angst and high emotional drama is necessary for two people to realize that they love one another. But this story shows that you can enjoy someone’s laughing company, and over time crave it more and more, even as you find more and more that everything they do is funny. Pleasure in someone’s company begets more pleasure, and surely, love is an extension of that?

One quibble I have with Ms. Martin’s writing is her lack of knowledge of correct usage of the noble titles and other such minor historical missteps. Usually, I’m particular about accurate historical details, but in the case of Ms. Martin’s books, I love her writing, her characters, and her stories so much, that I forgive all.

If you’re fond of traditional Regencies, I highly recommend The Hampshire Hoyden.

Note:  The Hampshire Hoyden is currently out of print and there is no e-book version available.  One may find used copies at Amazon here.