Contemporary received more votes as a category than any other. Though there were some who said that none of the covers were appealing, several voters mentioned how hard it was to choose. This year’s slate included some classic landscape /wp-content/uploads/oldsiteimages, but there were several that voters found innovative and different as well. 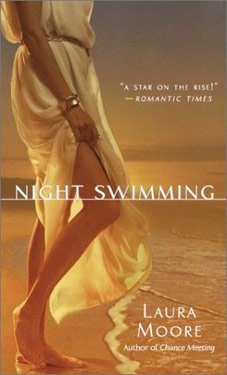 The top honor in this category goes to Night Swimming, a cover described by voters as soft, elegant, uncluttered, and romantic. One series author admitted to buying the book because she loved the cover: “I bought this book because of the cover, something I rarely do. But this one had everything—sensuality, warm colors and water. Great title…not busy. Perfect!”

Meljean confessed to heroine envy: “I’ve never seen this cover before, but now that I have I’d definitely consider looking at the book itself. It is beautiful—the colors, the woman’s pose…I want to be where she is.”

It also won Coverballot member Mary Lynne’s vote: “I love the use of light in this cover. The way the light shines through her dress and off of her legs is wonderful. The clean modern type font is a good contemporary touch, and the grading of the colors in the sky in the background is a nice, subtle touch. I also considered Slow Hands (a cover that has grown on me) and Lakota Legacy, but I kept coming back to NS. Overall, though, this was a very strong slate of well-done covers. ”

The Pursuit had a strong second-place finish. Voters who chose this one liked the monochromatic color tones and the air of intrigue. Ethel’s comments were echoed by several voters: “It’s simple but classy, and very intriguing. It makes you want to know who the woman is and why she’s running.”

Robin agreed: “I love the duotones on several of the covers, but there is something about the bride rushing into the church that would catch my eye. Her dress is very sleek and modern and she gives the impression she might not really be rushing into her wedding, late, but that she might be running FROM something. Looks intriguing, and I have no idea what the book is about.”

Jeanne was one of several voters who loved not only the running bride, but the church as well: “I like seeing beautiful architectural details in addition to an attractive model whether it’s a male/female. It adds interesting texture to covers.”

And for Stacy, the cover really just had it all: “So many things come to mind when I look at this cover: romance, love, marriage, mystery, beauty, anticipation, even glamour.”

This one got my vote as well; I thought it was classy and breathtaking.

Two covers tied for third. The first was Slow Hands. It is perhaps not surprising that several voters who liked this one also liked the winning cover, Night Swimming. Myretta was one reader who found it hard to make the choice: “I liked both this and Night Swimming, so I seem to be going for the ‘leg art’ in this category. I chose this one because it’s a really sexy picture.”

Indeed, “sexy” is a word that came up over and over in comments. Voters liked that it was sexy, but not trashy. Arielle had this to say: “I like that it looks like a watercolor, the blue tones give a hazy, dreamlike quality to the picture as if it were a fantasy. Plus the way the man’s hand drags up the hem is a reference to the title. The cover is sensual and sexy without being vulgar.”

More than one voter mentioned the sexiness of the hands themselves. Tracy said: “One of the first things I notice in a man is his hands—this one has NICE hands! Very sexy yet understated.”

It also got the top nod from Ballot Chair Elaine, who called it “smoldering sensuality in cool blue.”

Also coming in third was the mysterious-looking Dark Angel. Voters were intrigued by its spooky, gothic feel. It reminded Ita of some past favorites: “Mostly, I like the colors and the mystery. This reminds me of the old gothic covers which I liked.”

Amanda really wanted to know what was going on: “

[The] mysterious elements are typified by the castle bathed in various hues, and the darkened foreground are all harbingers of what’s to be read inside. I especially enjoy the purple hues incorporated throughout, including tingeing the moss, as opposed to castle/estate surrounded by naught but open fields. This cover begs exploration.”

Karen liked it as well: “Depth of color (I’m a sucker for deep blues and purples), atmosphere, ‘whooo’ factor (little pleasant shivers) and I’d like to take a walk there myself…in company with someone I *know* isn’t a villain.”

Amazingly enough, two covers tied for fifth place as well. The first was Everybody’s Talking, which pleasantly reminded voters of an old movie or a photograph.

AAR’s Anne admired it for that reason: “The black & white makes it stand out. It also looks retro, but in a good way. Like a photograph from an old Life magazine.” Anita agreed: “I like the black & white photography. Reminds me of those photos from the ’50s and ’60s of Paris, which of course I find inherently more romantic than almost anything. Also, it looks modern and fresh with the people seeming to be equals and simply in love. Very much of the now.”

Carol found it refreshingly different: “It is a breath of fresh air with it being very different yet compelling. It is also hard to lose with black & white coupled with red. This also reminds me of romance movies from the 1940s, which era had some of the finest romance movies ever made. The others are just ‘same old, same old’ in comparison.”

The other fifth-place cover was Lakota Legacy. Voters liked the simple, understated look—and some really loved the jewelry as well. Cindy had this to say: “I simply love the design. Native American design always draws me in. Now I would love a choker and hair ornament to match. It is so beautiful. Great design, great colors and type style as well.”

Susan loved the overall look: “I like the colors, the composition, the woman’s beautiful posture and back…it’s the only one that would compel me to pick it up and look at it if I were browsing in the bookstore.”

In seventh place was Sweet Memories. This cover fared well with those who preferred floral covers. Several described its impressionistic feeling. One Regency author said: “Evocative. Well drawn and nice colours. A bit Monet-ish with the bridge!”

A popular paranormal author agreed: “It’s awfully pretty. Reminds me of a Monet painting. Also, Fabio appears nowhere in evidence. Always a plus!”

It also got Janis’s vote: “I think this cover is beautiful. The hazy look combined with the colors in the center portion combine to give you a feel for what the book is about. It evokes ‘sweet memories’ of quiet walks on spring days—a more peaceful time. Very nice. Other than the cover for Dark Angel (my second choice), many of the other nominations were jarring, and would, I think, distract me from the story.”

The Still of the Night was the eighth-place cover. Several voters mentioned the haunting eyes of the hero.

Linda said: “It drew me in, I couldn’t stop looking at it. I love his eyes.”

Caseyanna picked it because she prefers attractive covers that focus on the hero: “I liked TSON because of the collage artwork. Also, I would much rather look at a handsome man on the cover of my book than a woman’s butt and thighs.”

It also got AAR reviewer Leigh’s vote: “This and the Dark Angel covers are the only ones that stand out to me. The rest all look the same. I really like the colors (kind of like a watercolor painting in the background) and the layout. I don’t know if the book is kind of mysterious, but if so, the cover definitely sets the mood.”

Coming in ninth was Heart of Gold. Voters liked the gold tones and calm, serene feeling. Tabitha made it her choice: “Calming and beautiful. Like a sunset and plays off of the word ‘Gold’.” Cydi liked it as well: “I adore sailboats, so I always pick up books with sailboats featured on the cover, just because it is a sailboat. Secondly, the woman’s face looks peaceful, like something wonderful happened to her, and she is contemplating it. The windblown hair makes me wonder if the woman (the heroine?) is on a boat.” Jill also liked the sailboats, which she felt were refreshingly different: “Lots of beautiful covers this year. I love the warm colors in this one and the boats and water say romance in a non-cliché way.”

In tenth place was June in Winter. Judy thought it was “very natural looking,” and added that it quickly drew her attention. Shelby liked the heroine’s comfortable position: “Silly reason but this is one of my favorite ways to read—sitting by the open window, and this book just strikes me as pretty.” It appealed to AAR/Coverballot’s Rachel as well: “I just love how peaceful this cover makes me feel.”