In the past, the Historical Series category has generated the fewest votes, and that was true this year as well. Many readers who did mentioned that the covers had a certain sameness. Diane seemed to speak for many when she said, “Maybe it’s the genre, but I feel like I’m picking the king and queen of the prom.” Susan offered a different analogy: “The couples almost always look like they’re in one of those artificial poses wedding photographers force people into.” What is interesting to note, however, is that while many voters expressed the sentiment that the covers were all the same, they all thought they were voting for the only one that stood out from the crowd, even though the qualities that made a cover “stand out” were different for everyone. This category was very dominated by Signet Regencies, which received more nominations than their Zebra counterparts. 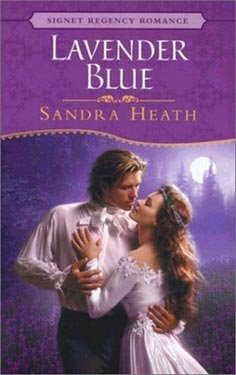 Lavender Blue was the clear winner in this category, with a comfortable vote lead over the second-place cover. Those who voted for it thought it had a mysterious, ethereal quality, and many mentioned the romantic full moon in the background.

For many voters, including Kari, this cover stood out as the only “different” one on the ballot: “This one is different from the rest—not so cliché Regency in style.”

Charlotte also thought that this cover managed to overcome some of the inherent weaknesses of the category: “None of these covers are my favorites—not because of the skill of the artists and designers but of the limits of the framework in which they work. The innovation and uniqueness present in the other categories is missing here—not surprising, as these covers are meant to connote tradition and adherence to traditional genre format. Nevertheless, Lavender Blue is IMO the best of this group, with its closer perspective on the couple and the nice perspective and lighting in the image. The color works well with the top color (which I don’t find to be the case in all of these, e.g., Abducting Amy) and also with the title. It’s a pleasant, appealing, attractive image and cover.”

Ballot chair Jaycee also made it her pick: “It’s soft, dreamy, and very romantic, and it stands out in the crowd. It was my pick from the first.”

The second-place cover was Emily’s Beau. Voters were attracted to its impressionist quality (several said it reminded them of a painting) and its tender, romantic feel. Several mentioned the heroine’s hands on the hero’s face. Many others mentioned that the couple looked like they were actually in love with each other (rather than merely ready for a toss in the hay).

Chris’s comments were typical of this group: “It is very charming. It looks like they really love (not just lust) each other.”

Others, like Cheryl, thought that this cover was less “stiff” than many of the others. She liked the colors and the sunset, and added, “it seems a more natural, less ‘posed’ than the other entries.”

This cover also caught the eye of Coverballot’s Mary Lynne: “In a historical series cover, it’s the little details that count, and this cover has a marvelous painterly background. The couple here is juxtaposed against a rich wash of colors that build the image of the lake and the trees. But the background doesn’t overpower the central figures; it complements them instead. There’s a nice intimacy to the couple’s pose that doesn’t go over the top as well.”

Coming in third was The Secret Diary. Those who chose it tended to like either the expression on the heroine’s face (a sly smile) or the theater setting.

Leah was one who liked the heroine’s expression: “This is such a nice change from the traditional Regency half-swoons. I love the woman’s half-smile; it makes her look just a little bit mischievous. I also love how the warm colors in the background and their skin contrast with the cool purples and blues. Gorgeous.”

Reyesuela agreed: “Yet another sea of near-identical mediocrity this year—the bad 1970s interpretation of Regency style, the too-cute poses, the general dreariness of covers that found their niche far too long ago. The Secret Diary is the only one of these that shows any genuineness and life, with the heroine sporting a slightly wicked smile that might just spark a revolution—or a rebellion.”

LFL fell squarely in the camp of the theater fans: “I love the theater, and seeing this couple in their glamorous theater box just makes me happy. It whisks me to the Regency era immediately, and to a place I would love to be—the theater or the opera. Calgon, take me away!”

I also chose this one, for the same reason as LFL. The theater box just said “romance” to me.

The fourth place cover was Lord Logic and the Wedding Wish. Those who voted for it thought it playful, fun and a little flirty.

Kristin really thought it stood out for this reason: “Unlike the other covers, the couple shown here are not in an embrace. It shows a very teasing/flirty aspect that is often ignored in romance covers, particularly Regencies.”

It was also the choice of AAR’s Leigh Thomas: “It stands out among all the clinches. The couple doesn’t need to be swooning all over each other to look romantic. These two look charming and fun.”

Arielle liked that it really reflected the Regency genre: “Since this is a Regency, I thought this cover portrayed the witty banter usually associated with this genre. It was also less ‘been there, leaned like that’ than the other nominees.”

One Touch of Magic was the fifth place cover. Voters like the use of color and the romantic balcony setting.

Helen liked that the cover seemed more accurate than others: “This was very pleasing to the eye and the clothes looked like they were from the time period. Some of the other dresses looked too modern for a historical story.”

Cora also felt that this couple was more authentic: “I finally decided for this one because I like the cover scheme and because the woman doesn’t look overly tanned for once (regency ladies did not suntan!). Plus, it is nice to see a blonde hero for once.”

The sixth place finisher was Miss Prestwick’s Crusade. Those who chose this one thought that the indoor artist’s studio setting made it stand out from the crowd. Erin felt that it did a good job of capturing the characters: “You can actually see their expressions and read their body language—the way she has her head tilted towards the hero, the way he’s looking down at her—it’s all in the details. These details make the scene seem so much more intimate that the others, where the characters have generic ‘serious clinch’ expressions.”

Nana was glad to see the couple indoors: “It’s nice to have the couple inside for a change, rather than the forty millionth garden or balcony, and the table in the foreground coupled with day dress give the revolutionary impression that something other than balls might have happened in this time period. In many of these covers, the artists seem to be trying for a coquettish pose but end up with a heroine who just looks like she wants to get away. Miss Prestwick looks like she’s enjoying flirting with the hero.”

Katherine liked the updated look of the new Signet Regencies, and this was her favorite of the lot: “This is my favorite because I like the setting and the two characters. They look like real people instead of something from a fairy tale.”

Coming in seventh was False Steps. Readers found the colors pleasing and the clothing accurate.

Melissa thought many of the covers were similar (including this one), so the appealing colors tipped the scales for her: “With only two regency publishers that appear to have the same guidelines for covers, there’s not much to distinguish them. Although I buy and read regencies, I rarely pick one and read the back solely on the basis of the cover, as I do other historicals. I chose False Steps because it had the most appealing color palette of the choices, not because it really stood out from the rest.”

Coverballot members Lisa and Marian both chose this one. They thought that the clothing was much more accurate. Marian had this to say about her choice: “I actually like all of the covers, but chose this one because of the details in the garden. Also, as a Regency reader, I know that these evening clothes are more authentic than in other covers.”

A Hint of Scandal came in eighth. Voters loved that the hero was putting a necklace on the heroine.

Jackie confined her comments to one word: “Presents!”

AAR’s Takiesha chose it for the same reason, she liked “the bestowing of the jewels” and found the heroine’s dress very pretty as well.

Nga agreed: “There’s something cool about a man placing a necklace on.”

The ninth place cover was A Foreign Affair. The appeal of this cover can be summed up in three words: Man in uniform.

Ellen admitted to “loving a man in uniform,” but Vonna was even more explicit: “I don’t know for sure why I picked this, it may be the winding road in the background, hinting at story with twists and turns, but I really think its the full frontal in tight white britches!”

Barbara thought it looked both romantic and exciting: “In the foreground, you have a hero of the Napoleonic Wars, splendid in his scarlet regimentals. And in the background, you have the hint of danger to come for the protagonists. These elements make for a great Regency cover!”

Rounding out the ballot was Abducting Amy. Voters liked the background, which several called “romantic.”

Carolyn liked “the soft look of the misty garden and the fountain.”

Malvina chose it because “this lady is about to be well and truly kissed in a very romantic looking garden.”