The series category has continued to grow in popularity and quality. It’s come a long way from the first year of the contest, when many voters confessed to choosing the one they disliked least (rather than the one they liked most). Since more series romances are published than other type of romance, we see a lot of nominations in this category.

Linnae, who oversees this category, had this to say about the final slate:

“The words traditional and romantic describe the ten 2003 Series finalists. In a year where many Series covers featured confusing, cluttered or out-of-focus artwork, simplicity and clean execution prevailed. All of the finalists showcase traditional couples, and seven feature a tender embrace. The mood of each cover is very different. Some are whimsical, some mysterious, and one is tongue-in-cheek sexy. A successful romance cover can be either humorous, edgy, or romantic, as long as it creates an appropriate emotional response, especially if the cover showcases a unique approach to the genre.” 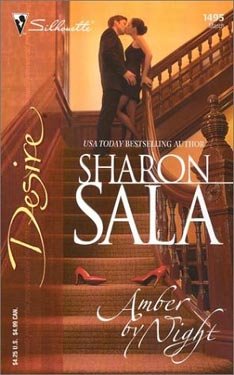 The Series category had the only truly close race on the ballot, with the winner edging out the second place cover by less than ten votes. Interestingly, many of the voters that picked either cover had a hard time choosing between the two. Ultimately, the winning nod went to Amber by Night, a cover readers admired for its beautiful tone (which many noted fit the title), intriguing staircase—and shoes. Everyone loved those shoes.

From Emily: “The shoes rock my world. They have more personality than the people.”

Cora was one reader who commented on the apropos color scheme: “I love the colour scheme which also fits the title of the novel very well. Plus, shooting the couple on the staircase was a great idea, I also like the other staircase cover in this category. I like the fact that the couple is still fully clothed, yet the fallen stilettos on the stairs indicate that this is the prelude to sex. Another classy cover that no one would have to feel ashamed reading in a public place.”

AAR/Coverballot’s Jennifer was among those voters who were torn between the top two covers. She writes: “Both are lovely, interesting /wp-content/uploads/oldsiteimages. This one gets my pick because of the beautiful warm color, the tenderness between the leads, and the great details: the light shining on the banister, the red shoes on the steps. Just a really classy, romantic cover.”

Finally, more than one reader was favorably reminded of the famous staircase scene in Gone with the Wind. Phoebe said: “Well, there’s no doubt what’s going to happen next—sort of a more promising Rhett-and-Scarlett scene.”

The very close second-place cover was The Last Bachelor, which also featured a staircase. Again and again, voters described the cover as classy, elegant, and romantic. Several readers mentioned that they felt intrigued by the scene and wanted to know what was going on.

Jessica had this to say: “This cover is eye-catching because it is so very different from the usual series cover. It isn’t too over-done with color or weird poses. And I like that the hero is coming towards the heroine and she has turned herself towards him waiting for him. It makes me want to pick up the book and find out what is going on in the scene.”

Michelle agreed: “This is a cover that is full of questions and possibilities—it makes you very curious about the situation involving the hero and heroine. She may be turned away, we do not see her face, but her pose says a good deal, tension, expectation….”

Coverballot’s Jaycee almost chose The Venetian Playboy’s Bride, but ended up being won over by the sepia tone in this one: “This cover is great on so many levels, and the rich red border only serves to add to the drama. I love her pensive stance, as though she’s been waiting for something good to happen for a long time, and now that the time is finally here she doesn’t quite know what to do with herself. The man’s body language says he’s ready for anything, but all he really wants is what’s waiting for him at the foot of the fountain.”

This cover also got my vote; I couldn’t resist the gorgeous tone or that staircase.

The Harbor of His Arms came in third. The word most often used to describe it was “serene.” The lighthouse was also a big selling point.

Kestra was drawn to its realism; she felt like it was something she might actually see while walking on a beach: “The hero and heroine are clearly connected, and look like they’re heading the same place, both physically (the lighthouse…home?) and emotionally. It’s like a warm blankey on a blustery day.”

“Nice book, gives the me the feeling that I will enjoy a nice solid story about love, nothing scary, suspenseful, just quiet reading with a happy ending.”

The fourth-place cover, Scoring, has a very different mood. Voters found it sexy, playful and fun. It’s also interesting to note that though the majority of voters who participate in this contest are female, there are a handful of men who vote as well, and this seemed to be a very popular choice for them.

Coverballot’s lone male member, John, made it his choice; he loved that the couple seemed really involved with each other.

Plenty of women loved this cover too, including Jess, who cheered: “Yay for jaw lines! Yay for tight jeans!”

AAR’s Leigh reads a lot of series romances, and gave this one the top nod: “These all look the same to me too: sweet, cutesy couples being cute together. Too many tame clinches. Scoring gets my vote because I like baseball, and it’s the only one (except maybe Freefall) that doesn’t make the book look like it’ll send the reader into sugar shock. Definitely not cutesy.”

J. Baird felt like this cover turned the tables on the usual romance theme: “I like the realistic outfits that fit the baseball theme without being overly cheesy. I also like the fact that she is the aggressor. The roles are reversed from what you would expect to see on a ‘typical’ series cover. Looks like she’s trying to steal third base to me!”

Coming in fifth was Freefall, a cover with a spooky feel and suspenseful undertones.

AAR’s Lynn likes the eerie feeling: “I love the mysterious Gothic air about this cover. It actually led me to buy this book back when it first came out.”

Several readers were drawn to the soft purple and blue tones. Kristie said: “I love castles and this one looks intriguing. And I love the colours.”

This cover was also the pick of series chair Linnae: “I love them all but Freefall is sexy and mysterious. I love the colors, the misty fog that surrounds the couple walking below the house on the cliff, and there are zero marketing blurbs on the front cover.”

High Tide Bride came in sixth. Those who voted for it waxed poetic about the tranquil scene, and more than one expressed a desire to be in the heroine’s place.

Karen put it this way: “While I don’t put myself into stories, I tend to judge covers by how I’d like to be in them. This one looks serene and mellow and my type of place. The male company (what I can glimpse) doesn’t look bad either.”

Emelyn liked that the cover seemed appropriate: “It fits the title. This is a big plus in my book. The bride’s dress is lovely and arranged with a studied casualness that I find charming in this case. The hat is a nice touch, the man seems absorbed in his bride and the whole atmosphere is one of pensive serenity. I like it a lot.”

And Stacy summed it up this way: “It’s lovely and tranquil, and simply romantic.”

In seventh place was The Venetian Playboy’s Bride. For many voters, the city of Venice itself translates to romance. One historical romance author: “It’s Venice. How can you beat Venice?”

[I] love the way the colors of the sky reflect on the cobblestones.”

This cover also got the nod from LLB: “Who wouldn’t want to go to Venice? This is evocative of the title and I think it’s lovely.”

Diane chose it by process of elimination, and after reading her comment I thought perhaps she had a point: “Most of the others looked like commercial ads (Xmas Feast—Ragu commerial, Scoring—Gap Jeans, Amber Night—Shoe Sale, Last Bachelor—Ralph Lauren Evening Wear, Make Believe—Tic Tacs etc).”

Make-Believe Mistletoe won the eighth spot. Voters liked the holiday feeling and the warm atmosphere of a couple in love.

Jen found it sweet: “This couple looks like they are in love. They are looking at each other and smiling that dopey ‘I love you’ smile.”

Julia had a hard time choosing between three covers, but decided with this one because she liked the festive feeling: “In the end I decided for this one because I love Christmas stories and all the Christmas flavor and most of the time don’t like the covers at all. I found this one romantic and according to the season.”

Coming in ninth was The Christmas Feast. Those who voted for it were attracted to its realism; they liked that it looked like something that could actually happen.

Coverballot’s Karen thought it was unique: “This cover is different from most romance covers—it’s not blatantly about sex, but you can see the connection between the characters. You can imagine yourself in this situation. It just makes me smile!”

Krissy agreed: “I really like this cover; both the man and the woman are very attractive, and in a real ‘Hey didn’t I see those two at the grocery store?’ kind of way; I think the artist was also very creative and took a chance in portraying the couple being sweet and kind to one another, doing something as simple as cooking together—the couple is interacting in an intimate and romantic way, without any reference to sex or more physical aspects of a relationship, which aren’t the full expressions of romance in the first place. This is a wonderful change of pace.”

And in the tenth spot is The Knight’s Kiss. Voters liked both the couple and the pose.

Coverballot’s Sharon made it her pick, enthusing, “It’s all about Romance!”

It also appealed to Allyson: Both the people are attractive, yet not ridiculously unrealistic; the expression on the faces intrigued me.