I’ve fallen hard for someone… and he’s a character on TV.

I can’t stop thinking about him. His inability to seize happiness makes me sad and his drinking really is a concern. It’s just that he’s so interesting. I could watch him ask those probing questions he’s so good at all night long. What can I say? I’ve fallen for Endeavour Morse. 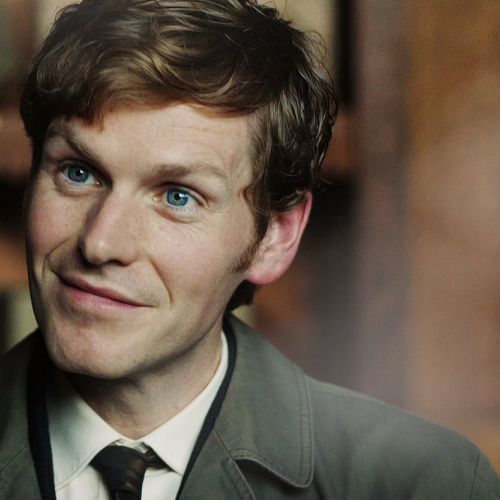 I do not have a celebrity crush on Shaun Evans, if that’s what you’re thinking. He’s not my type–too short and a bit too sandy for me. No–I have a crush on the character he plays, young Inspector Morse. I’m in the midst of season four of Endeavour and every episode, I’m more and more entranced.

It’s been a really long time since I’ve had a crush on a character from a TV show. (I get book crushes weekly.) Tim Riggins maybe, but to be honest, I think that might have just been lust. (Can you blame me?) Stringer Bell? Raylan Givens? Jim Halpert? Suffice to say, I can’t remember the last time I was this obsessed with some guy on the small screen.

How about you? Had any character crushes you want to share?

Oh, wow. How many. Tim Riggins, definitely. Brian Kinney from Queer As Folk (US). Spike from Buffy. Ephram from Everwood (although kind of over-angsty). Mal Reynolds from Firefly. Raylan Givens from Justified. I could go on…

Ri Jeong-hyoek, the repressed North Korean army captain from the K-drama Crash Landing on You. He has so much sweetness and passion barely concealed beneath a stiff (and utterly gorgeous) exterior. Swoon swoon swoon. Highly recommend this series – it is romcom / drama / soapy delight in one gorgeous mix. The chemistry between the two leads (one of whom is the aforementioned dreamy Captain, the other a South Korean business woman who accidently paraglides into North Korea during a tornado, a la Dorothy into Oz – you just have to go with the crazy) is amazing, possibly because the actors were genuinely into one another and have since gotten married.

Did the show conclude in a satisfying way?

It’s not an uncomplicated HEA, but definitely satisfying.

OK. I saw that some fans were sad there wasn’t to be more and I wanted to make sure I wouldn’t be left hanging.

Any other ending would be cheating, in my opinion. I want to say more but I think that would spoil it.

Someone at my book club last night was raving about the show Extraordinary Attorney Woo.

For those who love the Boromir/Aragon scruffy hot look, Halbrand (played by Charlie Vickers) is doing a nice job of bringing that to Rings of Power.

I will, at some point, watch it. All my progeny are glued to the screen!

I’m liking it so far. I think they’ve made some timeline errors but I’m trying not to let that ruin things for me.

I lust after Boromir in Lord of the Rings. If I’m honest, it’s probably Sean Bean I’m lusting after. I was devastated when Boromir was killed in the first LOTR.

Sean Bean’s deaths have been traumatic for us all! I wish I’d never seen his beheading in GoT!

I loved Sean Bean’s Boromir. The vast majority of characters in LOTR were clearly heroes or villains. Boromir, however, struggled. He was tempted by the power of the rings even as he knew it was wrong. That’s why his death scene was so powerful, because his fight to protect the hobbits, even as he was shot over and over, meant he’d chosen Good in the end.

I don’t know if this is a character crush or just movie obsession but I love Commandery Prince Xiao Jin Yu from The Imperial Coroner. He is essentially ancient China’s answer to Sherlock Holmes and combines an ability to solve puzzles with an amazing knowledge of trivia. I think one of the things I love most about him is who he fell in love with. He’s rich, powerful, and handsome and he is attracted to a girl who is poor, low in the social structure and cute rather than gorgeous. It’s not the actor, I’m not interested in seeing anything else he is in. I just love this character and show a lot.

I love this show. I was a big fan of Inspector Lewis, too, and have really enjoyed the fictional universe of these detectives. I think Shaun Evans and Eddie Redmayne (I’m convinced the two look similar) have a quintessentially English vibe that has its own sort of sexiness. They lack the brawn and perfection that makes a typical American heartthrob but I kinda like that about them.

I find Redmayne not at all sexy. He actually discomits me for some weird reason I can’t figure out.

I do love this show. We’re about to begin Season Five!

It’d be interesting to talk about what makes us attracted to someone. I can remember a PBS series which showed how good grooming can make a huge difference – they had a supermodel walk past a group of people with her hair essentially unbrushed, her clothes very loose fitting and unkempt, overstuffed handbag and showed how people ignored her when she needed help and simply walked past her most of the time. Same women, hair neatly styled, well-fitting clothes and neat handbag drew attention and male admiration. For women, the test involved the same guy dressed as a janitor and then dressed in a suit. Overwhelmingly, women found suit guy better looking even though they were the same exact guy. I know for me a guy in a cowboy hat or boots is a turnoff. Don’t care how good-looking he is, I’m not gonna be attracted.

In a fictional character, someone like Endeavor works for me. It’s a combination of his geeky awkwardness and superintelligence. I like how he’s soft-spoken and compassionate too. Redmayne as Newt Scamander from Fantastic Beasts is the same. Surprisingly, as gorgeous and brilliant as Benedict Cumberbatch’s Sherlock was, it took me a bit to warm up to him because he could be so rude and cruel. My character crush is a type rather than a particular character – it’s the geeky genius or the chivalrous hero ala Aragorn from LOTR.

When the LOTR films came out a friend of mine said that no one had ever made grubby look as hot as Viggo!

I find Redmayne, Cumberbatch and Evans unattractive; slightly androgenous, almost asexual somehow and they irritate and almost annoy me. I prefer my screen crushes to be more on the “bit of rough” side. I adored Sean Bean in the Sharpe films though he hasn’t aged particularly well though he has turned in some splendid performances over the past ten years. Aidan Turner’s Ross Poldark and Sam Heughan’s young Jamie Fraser are more to my taste. And I am developing a bit of a crush on Zeeko Zaki in FBI which we only discovered and are lapping up.

I feel that way for two out of three of them! But Morse is sexy to me. I think he’d love nothing better than to have his wild way with Miss Thursday but his shyness and manners keeps him back.

The actor, Evans, is quite traditionally hot in Vigil.

Vigil was good but we thought the last episode a silly cop-out. Deffo not a re-watch.

Not a rewatch, no, but I was cool with the ending.

I subscribed to Britbox and all the seasons of Sharpe are available. Oh happy days!

I totally agree with you about Redmayne, Cumberbatch and Evans. They are definitely not masculine enough for my tastes. Yes the young Sean Bean was gorgeous but he definitely has not aged well look wise but his acting has matured wonderfully. The character I am in love with is Ross Poldark and I thought Aidan Turner was great in the role but I know it is the character and not the actor playing him because I had a crush on Poldark in my youth in the 1970s when he was played by Robin Ellis.

Me too! That early Poldark series cause me to take my phone off the hook lest it ring and interrupt my burgeoning affair with Robin Ellis ;-)

I was in love with Ross, too – and both his TV incarnations (let’s not talk about the John Rowe one) were wonderful! I have to disagree about Redmayne/Cumberbatch/Evans to an extent – they’re all incredibly striking and CucumberPatch is one of those actors who can look both incredibly plain and incredibly hot (Dr. Srange…) That said, I do agree that Redmayne and Evans aren’t what I’d necessarily call sexy… but they’re nice to look at!