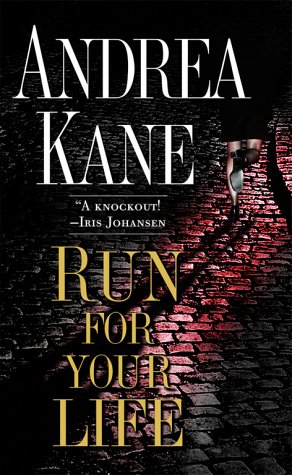 Earlier this fall I received an advance copy of Andrea Kane’s Run for Your Life from a print publication I write reviews for. Although I’d never read Ms. Kane before, nor am I, in general, a fan of romantic suspense, I thoroughly enjoyed Run for Your Life, her contemporary/romantic suspense debut. I enjoyed it so much that when preparing for the October 15th issue of At the Back Fence, I wanted Ms. Kane to be a part of it, to talk about the “reasonable behavior test” and how both the hero and heroine from this book passed the test with flying colors. She did – you can read our brief Q&A here.

Roughly two weeks after that, I received an email from the publicity department at Pocket Books, asking if AAR would be interested in helping them award copies of Run for Your Life to many, many lucky readers. That’s what I call serendipity, don’t you?

Yesterday on this page it was announced that readers could win one of 30 copies of Run for Your Life by sending an email containing their snail mail addresses. Within several hours, we had received many more than the 30 emails needed to fulfill this contest. Scroll down for a list of the winners – if your name is not on the list, your email was not among the first 30.

Pocket Books has been sent a list of the winners’ names and addresses; they will be mailing the books shortly. Ten of the winners, to be picked at random by Pocket, will receive signed copies of the book.

Congratulations to all the lucky winners. We hope that Pocket Books will help us do another contest for another new romance in the future, and that other publishers will join in as well!