Many readers do have favorite male models. There’s a lot of division about Fabio but, by contrast, models John D’Salvo and Cherif Fortin appear to rate highly with a great many romance readers. Interestingly, D’Salvo refuses to discuss his personal life or to have a fan club, according to a recent letter in Romantic Times. If you contrast that with Fabio, who seems omnipotent in modern American culture, this might be a very smart career move by D’Salvo. Do we really want to ruin our image of the hero by hearing the real world details of their lives? Further, do we want to hear them? What if they don’t sound like what we expected? Will that ruin the fantasy as well?

One reader forwarded in a cover image of D’Salvo on the cover of Touch Not The Cat. She loves the book and adores the cover; she wouldn’t dream of parting with it (listen up publishers who worry about those sales to used book stores). After I put the cover on the easel next to my computer and looked at it for a few days, I too bought the book, as I warned the woman who sent me the cover would probably happen! It’s one of the best portraits I’ve seen of D’Salvo as he seems to really be enjoying himself. A bonus is that it fits perfectly with the plot of the story. 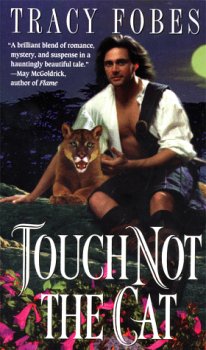 In doing a bit of research on what the covers of romance novels used to look like I came across a couple of interesting books. The first was Jackets Required by Heller and Chwast and the other was a new book of postcards called The Art of Romance put out by Harlequin.

Jackets Required covers the covers of all genres of books from the 1920’s through the 1940’s. Romance novels were not a genre per se at this point, but it was easy enough to tell when a book had a romance theme by looking at its cover. The only cover I found with a man with his shirt half off was Edna Ferber’s Cimarron from 1930. He has no chest hair so I assume this hairless convention appeared early. The heroine is standing behind him. He looks rough and tough but he is not outright gorgeous like D’Salvo or Fortin either. I’m not even sure he was drawn using a real model because he looks very generic to me. The details of the face are not seen as we are now used to seeing them. All of the other romance covers have the hero and heroine fully clothed. In virtually all of the covers, the image is either of the hero and heroine together on the cover or the heroine alone on the cover. These covers remind me of the art from Erté or the art deco period. You would consider them vintage posters if you were to see them now.

Interestingly, the whole idea of illustrated book covers began in the early twentieth century with the idea of making them mini-posters to advertise the book. These covers have all been out of print for many decades so I no examples to share. Cimarron is still in print but there is no cover pictured with it. I have included a cover done by Erté so you can see the “look” that many covers of that period had. 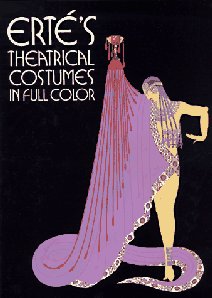 The Art of Romance is a new book by Harlequin of Mills & Boon (Mills & Boon was later acquired by Harlequin) and Harlequin covers. The first cover in the book is from a 1914 M&B novel. It looks like the vintage version of a cover of a series romance today with both hero and heroine on the front, fully clothed and staring adoringly at one another. One quaint touch is that he is on his knees while she is reclining on a daybed. As one flips through the decades, one sees covers which have either the hero and heroine together or the heroine alone, not the hero. When it’s the two of them, the heroine usually takes up more image space, not the hero.

The first even mildly suggestive cover in this postcard book is from 1986 and it shows the heroine draping herself over the hero while he is laying down on a black leather sofa. His tie and shirt collar are already loosened. My eye was immediately drawn to him, instead of her, for the first time while flipping through this book. This book was Janice Kaiser’s Love Child. The very next cover is from 1991 and shows four people – two men and two women. One of the men is bare chested. The book is Ben & Liz & Toni & Ross by Frances Davies, and yes, it reminded me of the movie Bob & Carol & Ted & Alice.

Another of the postcards from this book is from the 1996 release Mine & Ours by Jacqueline Diamond. Depicted on the cover are a mother, father, and three children laying on the floor together. Whether this is the first Harlequin to show children with the hero and heroine is not clear, but the postcard represents a style Harlequin has been using quite a bit in recent years.

A 1997 cover shows a bare-chested hero in his boxer shorts with a heroine in her robe and obviously pregnant – Another Man’s Child by Tara Taylor Quinn. This is the first time a pregnant picture appears in this book.

Finally, the last postcard is 1997’s The Next Man in Texas by Kristine Rolofson. Shown is a handsome cowboy, Stetson and all, holding a baby and looking delighted. A herd of steers is behind him. There is no heroine to be found. This takes us right into the cowboy and baby books which have dominated the categories since then. So in the Harlequin covers, the hero is presently usually fifty percent of the cover image and sometimes more. 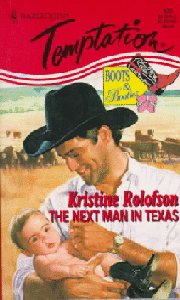