The Phantom Tollbooth (A LLB favorite)

I couldn’t have been more thrilled when my daughter’s fifth grade English class was assigned Norton Juster’s The Phantom Tollbooth. This wonderfully clever fantasy, illustrated by Jules Feiffer, was written in 1961 and I believe it’s never been out of print. I first read the book in junior high school on a friend’s recommendation and have kept a copy on hand ever since – indeed, my current copy is so old it lacks the ISBN scan line.

Over the years I’ve recommended it to many people; when I felt my nieces and nephews were at an age to appreciate it, I bought them copies. My own daughter read it many times in the past, but didn’t fully appreciate it until this year. Indeed, as of this writing, it’s her second favorite book and she’s re-read it at least five times since it was assigned last month.

I love this book because it’s a word-lover’s book. Most of us read because we love stories, but it’s a bonus to read a book that is written for “wordies,” which is what I call readers like myself who love words. My daughter disagrees where this book is concerned – she argues that while 40% of the book is about words, the majority is about knowledge itself.

Here is how the journey begins:

“There was once a boy named Milo who didn’t know what to do with himself – not just sometimes, but always.”

And so Milo, who is as bored at school as he is at home, discovers an enormous package in his bedroom that is – “not quite square…definitely not round, and for its size it was larger than almost any other big package of small dimension that he’d ever seen.” After he assembles the parts from the package, he gets into an old toy car, drops one of two tokens in the purple tollbooth, and is off on the adventure of a lifetime. Should he not be satisfied with his journey, his “wasted time will be refunded.”

A map precedes this opening text, and gives a strong clue that what is contained within isn’t at all ordinary. The first locale is named Expectations, where visitors can obtain “information, predictions, and advice.” After his brief visit through Expectations, Milo’s mind wanders, and as can be the case when not paying attention, his car stops in the Doldrums, where nothing ever happens and nothing ever changes. Indeed, the only way out of the Doldrums is to think. While perhaps the Doldrums aren’t a place you’d want to visit, Milo would never have met Tock had he followed the directions provided in Expectations.

Tock is quite literally a watchdog; he’s a dog with a built-in watch. You’d think, though, that he’d go “tocktocktock.” In fact, he goes “tickticktick;” it’s his older brother Tick who goes “tocktocktock.” Tock accompanies Milo throughout his journey to Dictionopolis, where he is assigned by the king to rescue the princesses, Ryhme and Reason, from their prison of the Castle in the Air. Milo and Tock are joined by the Humbug and journey through the Forest of Sight, the Valley of Sound, the Sea of Knowledge, and Digitopolis before climbing the Mountains of Ignorance where they can reach the Castle in the Air. There are stops along the way in Point of View and the twin cities of Illusions and Reality. 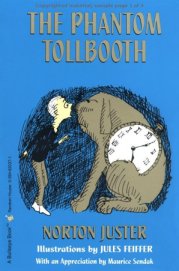 Each of these lands is a delight to visit. In Dictionopolis people don’t simply say something is big. Instead, it’s large, gigantic, enormous, gargantuan, huge, tremendous – after all, if one word is good, many must be better. Shopping for words or letters at the Word Market is something more fun than I can describe…have you ever wondered how an “A” would taste? Milo’s visit with Alec Bings in Point of View is one of my favorite parts of the book. Alec is roughly Milo’s age, but in Point of View, people don’t grow from the ground up, they grow from the air down so that their point of view never changes. Alec sees through things, which can make it difficult to see what’s in front of his nose. Here are all the points of view seen in his family:

“My father sees to things, my mother looks after things, my brother sees beyond things, my uncle sees the other side of every question, and my little sister Alice sees under things.”

It’s this type of wordplay that fills the pages of The Phantom Tollbooth. There’s much, much more to the story of Milo rescuing the princesses so that they may bring peace to the once friendly cities of Dictionopolis and Digitopolis, but since a great deal of the joy of discovery is in the words, it’s best to leave that for you to find out for yourself. There are lots and lots of Jules Feiffer illustrations throughout the pages of the book. They are deceptively simply, and yet they capture the humor, spirit, and mood of Juster’s text quite wonderfully.

The recommended ages on the back of my daughter’s copy are 8 – 12. While the reading itself isn’t difficult, much of the book’s cleverness will go straight over the head of an 8 or 9 year old. What makes this a great book for tweens is that it’s a confidence-booster; whenever they “get” one of the many wordplays, darned if they don’t feel a bit smarter.

The Phantom Tollbooth is a book well-suited for the desert isle and is practically a road map for leaving boredom. Each time I’ve read it I’ve been able to read more into it than the time before. If you haven’t yet read it, what are you waiting for?

Order this book from Amazon Books

To comment about any of these reviews on our message board