We’re pleased to announce the results of AAR’s Annual Reader Poll for Romance Books Published in 2012. This poll only works if readers vote and they did. So, a big thanks to everyone who entered a ballot. 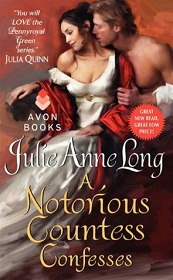 “Thank you from the bottom of my heart for the honor – it means more than I can say. A Notorious Countess Confesses was kind of a challenging book to write-over the years, I’ve learned that some stories just sort of flow with ease, and others only reveal themselves to me a bit at a time-and this book was in the second category. I think this was in part because I was writing big, often complex, emotions for Adam and Evie, and I wanted to make sure I captured them in such a way that readers would feel them, too. I fell in love with the characters as I wrote-and I think Adam Sylvaine might be my favorite hero yet, in large part because his strength and authority and shall we say, hotness, stem from his essential self, not necessarily from a title or wealth. I still have a crush on him.

And I couldn’t be happier AAR readers loved him, too. Thank you all so much for reading it and for caring enough to vote! xoxo julie”

“This was a huge, wonderful surprise. I want to thank the readers who joined Colin and Minerva on their wild journey and voted it among their favorites. Writing humor is always a risk, and with this book I really gave my inner geek free rein. I wasn’t sure if anyone else would laugh at sexy banter featuring math terms, or innuendo about fossilized sea creatures. I just knew that I loved these characters, and I loved writing them together. And I won’t lie, to know that readers loved the end result…it means a lot. A lot. I’m honored and delighted. Thank you so much.”

Tessa Dare
A Week To Be Wicked

Julie James
About That Night

“Oh, wow–what an honor! I’m thrilled, and humbled, to hear that readers enjoyed About That Night and selected it for this award. Thank you, AAR readers, I’m absolutely delighted. And yay for billionaire ex-con Twitter Terrorists! : ) ”

“I am thrilled that Defiant made such an impression on readers of historical romance. Four long years went by between Untamed, the second book in the series, and the release of Defiant, the third. In that time, the original publisher of the MacKinnon’s Rangers series folded, and for so long I thought the series was dead. I was heartbroken. But emails and letters from readers kept this series alive and made it possible for me to give Connor and Sarah their HEA. THANK YOU to all of you who helped convince Berkley Sensation to take a chance on this book and to all who voted for Defiant in the poll. For me, this book was a labor of love. Many thanks, also, to AAR for its years of support for romantic fiction. Now I’m going to go jump up and down!” 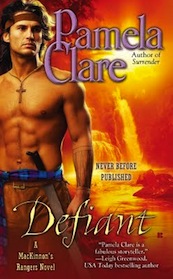 Best Historical Romance Not Set in the U.K. 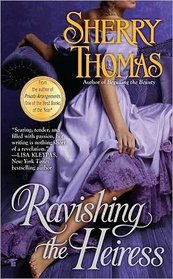 “I always want to write books that make me feel deeply. I felt very, very deeply while writing Ravishing the Heiress–the despair, the joy, and the entire journey in between. My gratitude to the readers of AAR for this honor–at least now I know I wasn’t crazy for weeping while reading through.

“A thousand thanks to everyone who voted for Lothaire as best paranormal of 2012! Lothaire and his heroine Ellie are two of my favorite characters in the Immortals After Dark series, and I am deeply honored and delighted that you enjoyed their story so much! All best wishes, 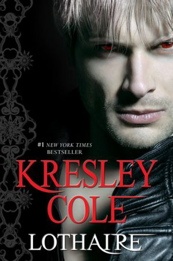 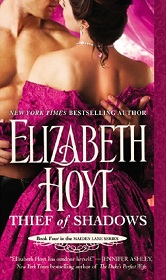 “Wow! This just made my day. Obviously the readers at AAR are very perceptive and discerning when it comes to reading love scenes.”

“Wow. I am hugely chuffed to know that Suddenly You has connected with so many readers. It was an enormously fun book to write, and I’m thrilled that Harry and Pippa found a home in peoples’ hearts. Thanks, AAR, for running the poll and for your great love of the genre, and thanks to all the readers who participated.” 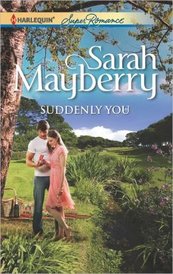 “This is such an honor and a joy. Writing in a genre so personal as romance often feels like sending out a message in a bottle: “Am I the only one who’d like to see a heroine who’s totally unimpressed with the hero’s mighty wang?” “Anyone else out there think land management and the effects of enclosure might make an interesting backdrop for a love story?” The votes of AAR readers are like a lot of sparkly little bottles coming back. Thank you, everyone who voted and everyone who reads romance.”

“I can’t begin to tell you how thrilled I am that so many readers have fallen in love with Gideon and his romance with Eva. When I was writing Bared to You, I was worried the subject matter–two childhood sexual abuse survivors trying to build a healthy romantic relationship–would be too dark. I’m so glad I was wrong! Thank you to AAR, who has been such an amazing supporter of the romance genre for many years, and thank you to all the readers who voted for Bared and Gideon. I’m honored and deeply grateful! All my best ~ Sylvia”

Sylvia Day
Bared To You 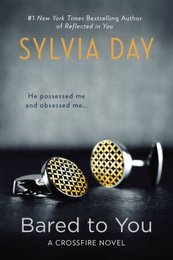 “Thank you for voting The Governess Affair as the best romance short story of 2012. There are so many amazing novellas out there. This is such a huge honor.”

Thanks yet again for your continued support of the Annual Poll. We would also like to thank all the authors, publishers and readers who publicized the poll, whether online or just by word of mouth.

This year’s AAR Annual Poll for Best 2012 Romance Books had some pretty interesting new obstacles. With the proliferation of so many ebooks being published, the votes for authors, titles and characters were incredibly wide-ranging. Publication dates also caused some confusion for readers and for us. As a result, we took extra precautions to make sure books were published for the first time in 2012 and were not previously published in a digital format. Another interesting outcome is that only two categories yielded honorable mentions meaning almost every category had a standalone winner showing that this year our readers were very decisive about the books they loved. And finally, there is a phenomenon that we pollsters are familiar with called ‘vote splitting’. This is where an author has more than one book published in the year and each title garners its own set of votes thus splitting the author’s chances of winning in a specific category by up to 50%. Many authors have had this obstacle in their path and still found their way into the winner’s circle, for example, this year, Sarah Mayberry had two books vying for attention, nevertheless, she won a category while Sherry Thomas was able to pull off an outright win even with a three title handicap. So without further ado, here are some favorite authors and a newbie who received wins and an Honorable Mention. (Note: Honorable Mentions are awarded when a second (or third) place title receives within 20% of the votes cast for the winner.)

Tessa Dare’s A Week to Be Wicked won in several categories, including Best Historical Romance Set in the UK, Funniest Romance, Best Romance Heroine (Minerva Highwood) and Best Romance Couple (Minerva Highwood & Lord Colin Payne). Tessa Dare won Best Debut Author in our 2009 poll. This is the first time one of her books has made the list since then and what a great showing Ms. Dare made as she took home the most wins for 2012 by winning in four categories outright.

Pamela Clare’s Defiant won Best Historical Romance Not Set in the UK making this the third year in a row that Ms. Clare has won a category. Two of her I-Team series books won for Best Romantic Suspense in both the 2012 and 2011 polls. It is wonderful to see authors who can excel in more than one genre.

Kresley Cole’s Lothaire won Best Paranormal Romance and with this long awaited story Ms. Cole takes home her first win in an AAR Poll. An Honorable Mention in this category went to Riveted by Meljean Brook who won this category in the 2011 poll with her first steampunk book The Iron Duke.

Bared to You by Sylvia Day won for Best Erotica/Romantica and for Most Tortured Hero, Gideon Cross. For those wondering about the impact of last year’s media hit Fifty Shades of Grey, there were 20% more ballots with the Erotica/Romantica category filled in than last year.

Best Series Romance went to Sarah Mayberry for Suddenly You. Last year Ms. Mayberry received Honorable Mention in this category for All They Need. Once an endangered category in the poll, nearly 15% more ballots included a vote in this category this year.

Best Women’s Fiction/Chick Lit went to Sophie Kinsella for I’ve Got Your Number. Ms. Kinsella’s Remember Me? received an Honorable Mention in this category in 2009. This is the second year in a row a British author has won this category (last year Jill Mansell won for To The Moon and Back).

Two authors reclaimed last year’s wins with their latest releases: Julie James won for Best Contemporary Romance for About That Night. This is the third year in a row she has won Best Contemporary Romance. And Courtney Milan won again for Best Short Story, this time for The Governess Affair. This is the third time in four years that she has won Best Short Story.

Elizabeth Hoyt continues to burn the pages as evidenced by her win for Best Love Scenes in a Mainstream Romance for Thief of Shadows. Elizabeth Hoyt has won outright, tied or received an Honorable Mention in the Best Love Scenes category in all polls except 2010 since the 2007 Reader Poll making this her 6th book to receive such high praise from AAR readers.

A perennial favorite, Nora Roberts, scored big for Best Romantic Suspense for The Witness. Ms. Roberts’ first big win (minus Honorable Mentions) was Best Romance in the 1999 Poll for Sea Swept. Her last win in the Romantic Suspense category was in 2008 for High Noon.

The Best Debut of 2012 was won by Cecelia Grant. Last year she received many, many, many votes but her debut book had a 2012 copyright making her ineligible last year. But now she can celebrate.

Three categories did not receive enough votes to declare winners: Guiltiest Pleasure, Best Inspirational and Most Disappointing (authors are probably thinking “Whew!”). As a result, we are dropping all three categories from the contest ballot next year.

But for next year’s contest, we will be shaking things up a bit and making the following three changes:

(3) We will add the category Novel (non-romance) with strong romantic elements.

Again, we look forward to reading all your thoughts about the results in the AAR Forums. To get the conversation going here are a few questions to consider:

Did any of the winners surprise you?
How well did your ballot suggestions do?
If you haven’t already read the winners, will you do so now?