Reviewer Teresa Galloway chose Sherrilyn Kenyon’s Fantasy Lover as her favorite this year. She has this to say about her choice, “Although it wasn’t a DIK for me, it came close… the end was a bit lame.” Teresa added that two big runners up were Diane Farr’s The Fortune Hunter and Lisa Cach’s George and the Virgin – both titles on the short lists of other reviewers. She said, “All three of these I would have rated a B+ and picking between them was hard. But for some odd reason Fantasy Lover is stuck in my head the way the others aren’t.”

Two authors got nods for two different books (surely a sign of the depth of their appeal). Meg/Meggin/Patricia Cabot was a favorite with both reviewer Mary Novak and Coming Attractions editor Bessie Makris. Mary had a somewhat “off” romance-reading year, but like LLB she found some gems in the YA section, and she and LLB both adored Louise Rennison’s witty Georgia Nicolson series (Dancing in my Nuddy-Pants will be released in the US next month, and follows Angus, Thongs, and Full-Frontal Snogging, On the Bright Side, I’m Now the Girlfriend of a Sex God, and Knocked Out by My Nunga-Nungas) about the antics of a smart-mouthed 14-year-old English girl in diary format.

Mary gave her top nod, though, to Meg Cabot’s All-American Girl. She also mentions enjoying Cabot’s Princess books, and would love to see some of the energy of these YA novels rub off on their adult counterparts. Bessie Makris chose Cabot’s Boy Next Door as her favorite. Runners up for her included Diplomatic Immunity by Lois McMaster Bujold, Living Dead in Dallas by Charlaine Harris, and No Place Like Home by Barbara Samuel.

Nora Roberts/J.D. Robb was number one with Reviewers Liz Zink and Claudia Terrones. Claudia also found herself reading a lot of non-genre books in 2002, but her favorite was Robb’s Reunion in Death. Liz read a lot of great SF and Fantasy this year – and her top pick was Roberts’ Face the Fire, a book with a strong paranormal element. She gave honorable mention to Hazard and Romancing Mr. Bridgerton.

Several reviewers mentioned Lisa Cach’s time-travel romance George and the Virgin on their short lists, and it got the top nod from two reviewers, adding to the number of Alternate Reality romances picked by our staff as among their 2002 favorites. Reviewer Laurie Shallah had less time for reading this year and George was the best romance she read. Reviewer/Special Title Listings editor Rachel Potter also made it her choice, although she too enjoyed both of Meg Cabot’s YA books for 2002 (Princess in Love and All-American Girl). About her pick, Rachel said:

“I very much enjoyed Prospect Street by Emilie Richards and Untie My Heart was thoroughly enjoyable and without a doubt the best written and most technically perfect romance I read last year. However, my favorite romance of the year was George and the Virgin by Lisa Cach. It was light and fluffy. It was somewhat (okay, entirely) unbelievable, but George was a heart-stealer, and the plot was as unpredictable as a greased piglet. I finished the book with a huge smile on my face. I was uplifted.” 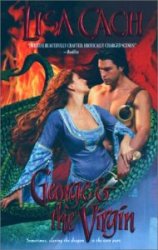 Two books got three votes each, so they will have to share the title of “AAR Reviewer Favorite.” The first is Out of Control by Suzanne Brockmann, the top pick of Reviewers Andrea Pool, Colleen McMahon, and Jennifer Schendel – and the last of the contemporary romances chosen by our staff. Andrea also enjoyed Nora Roberts’ Three Fates , but in the end chose Out of Control because she so loved the hero, Wildcard Carmody. Jen also enjoyed Three Fates and LLB’s favorite, Chesapeake Blue, as well as Jennifer Crusie’s Faking It and Romancing Mr. Bridgerton. But like Andrea, it was Out of Control’s hero that sealed the deal and made it her final choice: 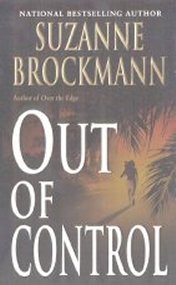 “Since we’re only allowed one favorite book for 2002, I have to go with Out of Control by Suzanne Brockmann. It’s the only book I read from cover to cover twice this year. I admit it I’m a sucker for heroes who always say the wrong thing, but their heart is always in the right place. I think Ken Karmody is my favorite Brockmann hero overall, sweet, lovable, kind of geeky, but sexy as well. The rest of the book was good too.”

Sharing top honors with Out of Control is Connie Brockway’s historical Bridal Favors, the favorite of current editor Sandy Coleman and previous editor Marianne Stillings. It was also the favorite for reviewer Kelly Parker. Marianne found 2002 to be a weak year on the whole, but she thought Bridal Favors had it all, adding, “It was lovely and intelligent; it charmed me.” Kelly picked up Bridal Favors after reading Brockway’s short story, The Bed is Made, and it was an all-out winner for her.

Sandy had a pretty good year over all, and for her, Bridal Favors was the best of a strong field of contenders that included Untie My Heart, which she found exquisite, MJP’s The Spiral Path, Karen Hawkin’s An Affair to Remember, Lisa Kleypas’ Lady Sophia’s Lover, Faking It, and Contact.

Though Untie My Heart and Bridal Favors are two of the best romances she’s ever read, when forced to choose just one, Sandy picked Bridal Favors. She said:

“With the lightest of hands, Connie Brockway created one of the most charmingly perfect love stories I’ve ever read. Justin and Evie were adorable characters and the humor simply couldn’t have been more infectious. And though Bridal Favors is definitely the lighter side of Brockway, I think it would be a mistake not to consider it one of her major achievements – hey, it takes an amazing writer to make it look this easy. And, as I said in my review, what a wonderful movie it would make!” 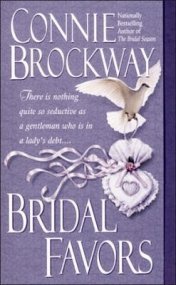 So this year we’ve got two winners – a change from the overwhelming favorites of last year – and a lot of different picks. What’s worth noting aside from the general diversity is that some names came up again and again, even though they may have been the top choice for only one reviewer. Books like Romancing Mr. Bridgerton and Untie My Heart were enjoyed by several of us. AAR’s annual reader poll is now closed, and the eagerly awaited results will be announced in the following column. Last year reviewers’ choices dove-tailed neatly with the choices of the general readership, so I can’t help wondering if this year’s diversity among reviewers will be reflected in the general poll as well. Stay Tuned, and we’ll all find out.

“I was proposed to on Thanksgiving morning 2002.

“My fiancé and I have a favorite movie that we watch every time its on HBO – Moulin Rouge. On the morning of the proposal it was like any other morning, where we sit by the fire, reading the paper and drinking coffee together.

“About an hour into our morning I ran upstairs to get some laundry and I hear him yell up to me that Moulin Rouge was on. So, I ran downstairs sat in front of the TV and sang along to the musical as I always do. About a half-hour into the movie there is a part where Christian (Ewan McGregor) and Sateen (Nicole Kidman) are singing their love song called the Elephant Love Song.” But instead of seeing Ewan McGregor singing, I see my fiancés face come up on screen – he is singing the song instead! He proposed to me from the movie Moulin Rouge! A beautiful song, a romantic speech and most of all an amazing proposal.

“It seems that a week before he went to a television editor and had his face and voice edited into the movie. I was so surprised and shocked that I didnt say yes for 10 minutes. I find out later that he timed it just right, as I ran upstairs he popped in the videotape into the VCR, and all along I thought I was watching HBO. It was the most romantic, thoughtful thing he has ever done for me. The best part of this whole proposal, is I can watch this special moment for years and years to come.”

LLB: Congratulations, Roxanne, you’re this year’s winner in our Isn’t it Romantic? Contest! I’ll be sending you your prize – a VHS version of one of my own favorite romantic movies – Sixteen Candles – shortly!

Now that we’ve closed the poll in our annual reader poll, we know you all want to talk about your favorite romances, so we’re not going to stop you now! We can’t see ourselves asking, “What did you think about my choice as best romance of the year?” so there will be no individual questions this time around – just an open forum for you to start talking about the books presented in the column and others you loved from 2002.

We also realize that there’s bound to be disagreement about some of our reviewers’ choices given that there’s so much disagreement even among ourselves as to which romances were the best in 2002. If any of the titles presented in this column were of books you didn’t care for, here’s where you can talk about that.

The March 1st issue of At the Back Fence will present the winners/losers in this year’s annual readers poll. It will include, as always, analysis of the biggest winners/losers and comments from some/most of the winningest authors. You’ll be free at that point to share why you agree or disagree with the results.

In the meantime, though, feel free to talk about the books you loved from last year; you’ll probably convince someone to try a book they hadn’t considered; in fact, if reading this column does that for you, we’re thrilled.

Post your comments and/or questions to our Potpourri Message Board