From the Desk of Sandy Coleman: So, what do readers want, what do publishersthink we want, and will ever the twain meet?

It started as a lot of these things often do, with a rumor. Word had it from a source who should know that Avon was getting out of romantic comedies.

Hmmm. Now I cant say I ever thought of Avon as a publisher heavily into the romantic comedy market, but they do publish a number of contemporary authors who are certainly amusing, including two of my all time favorites, Susan Elizabeth Phillips andRachel Gibson.

So, I decided to go right to the source to try to find out what was going on and emailed Lucia Macro, one of the head editorial honchos at Avon. Her reply was swift.

Thank you for asking. I’m not sure how the grapevine gets growing, but we’re not “out” of any business. We are, however, responding to market trends, and right now the market is not as receptive as it has been in the past to comedies. Therefore, we’re being very selective about what we acquire in this area. However, if a book is amazing and has depth and complexity that would be the kind of comedy we’d go for. After all, we are still publishing Susan Elizabeth Phillips, and would love to publish other authors of that caliber.

She expanded a bit more in an email to Rachel Gibson (who, incidentally, aided me greatly in putting this article together).

“We’re not “out” of any business  we are just being very selective about what we acquire, because it’s very difficult to launch new “cute comedy” authors. The market isn’t responding as readily as they have in the past. The book has got to be amazing and have a depth I haven’t seen in many comedy submissions of late. Of course, if an author is already established and is doing well, that’s a different story.”

Well, sounds right to me. If a book is good, then it transcends any preconceptions about genre. Which then got me wondering about those market trends Macro talked about. Now all of us think we know what the market is demanding  or what publishers are demanding, anyway  and they can be summed up in a few short words: Paranormal and Regency-set historicals, and the hotter the better. Are we right? (Okay, not counting Nora Roberts here, because Roberts is her own game.)

I think the bestseller lists are the strongest indicator of what’s selling these days. And, of course, it’s always wonderful when an author takes off, as Samantha James has with her most recent The Secret Passion of Simon Blackwell. We look to the authors to point the way. For example, I always thought Tracy Grant was ahead of the curve, so now I’m so excited to be reintroducing her books to new readers.

But what do others on the editorial side think? Cindy Hwang, guru of Berkley Sensation and one of the most respected and innovative editors in romance publishing, had this to say:

Wish I was as sage as you think I am!  Frankly, I’m not sure I’m going to be much help because from where I’m sitting, paranormal is still really popular, but I do think the historical romance is starting to make a comeback  but for already established authors, rather than new authors. For a brand new author, it’s probably easier to sell a paranormal romance to both booksellers and readers than a book from any other subgenre, and that, as well as the quality of authors and stories we’re seeing, will keep paranormal going strong.  Erotic romance is still a strong subgenre, but has plateaued a bit.

I’m looking to acquire all different types of commercial women’s fiction  romantic suspense, historical romance, historical fiction, paranormal romance, commercial women’s fiction, and suspense. I don’t think paranormal romance is played out, although the market is certainly crowded at this point. But there is so much crossover appeal to fans of other genres like sci-fi and fantasy, which helps. And the nature of the genre allows for continually fresh premises and world building. I do think certain subgenres, like vampires, are getting to be more difficult to break into since there are so many established authors writing vampire stories. I’ve heard many people say that the market for historicals is difficult right now, but we continue to do well with historicals and haven’t noticed a drop in sales in this area.

Were all watching the paranormal market and thinking that surely it wont continue to be strong, but it does. But authors are keeping it fresh by creating other paranormal/magical type creatures, so were moving beyond just vampires and werewolves. Were also doing well with erotica and the anthologies and single titles were putting together with Elloras Cave. As for historicals, Sabrina Jeffries and Liz Carlyle are strong for us.

I know readers get frustrated, but the challenge with a romance program is that you only have a limited number of slots available and well only acquire a book when we think we can do right by it and the author. But the genre is doing what it always does by constantly reinventing itself and a book will come along and do well and, suddenly new subgenres are fresh again. Believe me, were all looking for the Next Big Breakout Book.

And what about authors? Julia Quinn had this to say:

The problem with romantic comedies is that they’re hard to do well.  In the end, the book has to be about the romance.  The author cant just make the reader laugh; she has to grab their emotions, too.  And that is difficult to do in the same story.  So what happens is you have a book that is all about being funny, and a reader might enjoy it, but she doesnt remember it.  Not in the way she needs to for her to desperately want to buy another book by that author.  Whereas a lot of the writers of paranormal/urban fantasy are able to reach in and grab hold of that visceral je-ne-sais-quois that leaves the reader begging for more.

Quinn seems to be echoing what Hwang, Herscher and Zidle also say about paranormals: The genre is elastic enough to allow for wide-open creativity. Ive never looked at in quite that way, but, not surprisingly, I think these industry pros are onto something here.

Connie Brockway, an author who made her name writing historical romance and now writes contemporary-set novels, offers these words of wisdom:

As I see it, the best examples of any romance form will always be popular and the most popular forms of romance will always be “on the way out.” If, say, three stellar romantic comedies are published within a short time (and let’s not forget to add to the mix “have great word of mouth”) then the perception is that romantic comedies sales are on the rise and to catch that wave, the industry actively publishes a lot of romantic comedies, some excellent, some not so excellent. The readers who originally drove the trend don’t have the wherewithal to “sample” all those hundreds of titles nor are they willing to do so. That huge initial readership, the ones who buy one or two titles a month, are the readers who skip around not only in the genre but amongst different genres, buying a romantic suspense that has great word of mouth, or a paranormal, or a gothic, or a biography, or an Oprah pick. While the niche readers, those who love romantic comedies, may still be reading just as many as they ever have, they salient point is that they aren’t going to be spending more money to do so. So, the money that is spent is spread thin. And bingo! The genre is on the way out.

Im going to let Rachel Gibson, who certainly knows her way around a contemporary, to have the last word:

I hope theyre not going away, but I do fear for the fate of the romantic comedy. I love a good romantic comedy as much as I love a heart-squeezing dark historical. The problem with the romantic comedy market is that too many authors confused silly with funny. Readers will only put up with silly for so long before they put the book down. Admittedly, it’s a very fine line between the two.

Also, I think a lot of writers made the mistake of thinking romantic comedy was going to be easy to write. They jumped ship from the historical market and started writing contemporaries. Some of them made the transition really well. Others didn’t and are no longer publishing. The same thing has happened with paranormal. Some authors are doing it well. Some are not. The moral of that story is that if you follow the latest trend, do it for love, not money.

And like all trends, publishers jump on it, flood it, and kill it. It will happen with paranormals and erotica too.

Something tells me shes got that right. 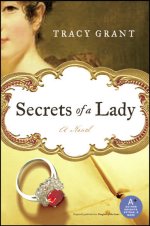 And now, a Gratuitous Plug for an Author I Think Readers Should Be Buying

So, were all agreed that we vote with our pocketbooks, right?

For anybody who hasnt yet read Tracy Grants Daughter of the Game, youve got another chance to discover one of the most intriguing and riveting books Ive ever read when it will be re-released by Avon in trade paperback this August. I dont want to say too much about the story because this is a novel that you truly do not want spoiled, but AAR’s Desert Isle Keeper review does a nice job of summing up just what makes this book so special.

As Lucia Macro mentioned, Avon is hoping to find new readers for this very deserving author by giving the book a new title  Secrets of a Lady  a gorgeous new cover, and some exciting new content. Heres the lowdown from the author:

Secrets of a Lady includes a new epilogue (a letter from Charles to Mélanie) and fifteen pages of what Avon calls “A+”, which is sort of like DVD extras. For this section, I wrote a series of letters between Charles, Mélanie, and other characters which flesh out the backstory. They were very fun to write (and hopefully to read :-). (Long enough to be interesting, short enough anyone who doesn’t want to buy the book again can glance through them in a book store).

To keep the good news coming, Avon will also be re-releasing Beneath a Silent Moon, the prequel to Secrets of a Lady, next summer and, if the books do well, Avon will publish the third, long-awaited book in the Charles and Mélanie saga. And that, fellow readers, is something everybody who cares about quality fiction should be excited about.

And Now, It’s Your Turn

Because so many editorial biggies participated in this column, no doubt they’ll try to keep up with the ATBF Forum. Now’s the time to take advantage of a captive audience. Let them know what you think about the current state of romance – who you like to read (and who you don’t), what you want to read (and what you don’t) – and what you’d like to see more or less of in the future?