From the Desk of Laurie Likes Books: Love is Attractive

While we were eating lunch at the airport in Hartford last week, I told my husband, “Don’t let me board without getting extra napkins; I just Kindled Calvin Trillin’s About Alice, and I know it’s going to make me cry.” The plane was delayed by two hours, so both of us forgot the napkin-as-Kleenex edict, and sure enough, I needed them by the time I finished this slender read, written by Trillin as a tribute to his wife, who died on September 11, 2001. 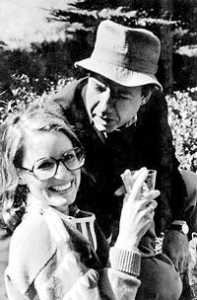 Calvin and Alice Trillin were married for 35 years. Both of their daughters, who, along with Alice, featured in much of  Trillin’s non-fiction writing, married in the last year of her life. Their daughter Abigail’s wedding, in fact, took place just four months before Alice’s death. In 2001, Alice, a non-smoker who had beaten the odds after being diagnosed with lung cancer in the late 1970s, needed open-heart surgery, and when surgeons went in, they discovered all the treatment she’d received for her cancer had, in fact, severely damaged her heart and arteries. She found the strength to attend her daughter’s wedding – and reception at a dim-sum restaurant in Chinatown. Trillin recounts that at the memorial service after Alice died, their other daughter, Sarah “said that she thought that Alice had toughed it out until she was sure her girls had married the sort of husbands good for the long haul.” A page later, Trillin himself writes with bittersweet irony about the ordeal: “You could say she died of the treatment rather than the disease. Presumably, though, it was also the treatment that, against horrifying odds, gave her twenty-five years of life. I know that Alice, the incorrigible and ridiculous optimist, would have said about a deal that allowed her to see her girls grow up: “Twenty-five years! I’m so lucky!” I try to think of it in those terms, too. Some days I can and some days I can’t.”

Though About Alice ends on this note, remembering Alice most as the mother of their children, the book itself is mainly a remembrance of a life-long love affair between the average-looking Trillin and his “blonde shiksa goddess.” Calvin Trillin’s visage isn’t one that immediately comes to mind when envisioning a romance novel hero, but the love he shared with his wife is surely what romance readers have in mind when we read romance novels and think about happily ever afters. He doesn’t write about her in passionate soap-opera speak, but in everything he’s ever written about her, you can feel the love.

When Alice Trillin died, enormous sympathy was generated among her husband’s legion of fans (with 16 of his books on my keeper shelf, collected over the last 20+ years, I count myself a major fangirl). It’s true that we only “knew” Alice through her husband’s writings, but for many of us, that’s what counted. Here was a man, a brilliantly funny man whose love of travel and good food was surpassed only by his unabashed love for his wife and children. His 2006 column in the New Yorker about Alice was reprinted all over the Internet, and in my downloads file, dated more than two years ago, is one of those reprints. Seeing About Alice, which is an extension of that column, at the airport bookstore last week jogged my memory, and I wanted to dig in as soon as possible. I couldn’t wait to read the whole thing, to see in book form what Trillin had to say about Alice’s life because I know the kind of love they shared was incredibly rare.

Although Alice Trillin was known primarily as Calvin Trillin’s wife, she was incredibly accomplished on her own…and he was intensely proud of those accomplishments. Their shared respect, love, and ability to keep the other grounded is, to me, the recipe for a perfect marriage. How many of us are in such marriages, know of others with such marriages, and have read romances whose HEA’s portend such marriages?

Romance novels generally focus on the passionate first throes of romance, but I think we read them not so much for that initial passion as for the fantasy of what the future holds for the couple. That’s why we’re such suckers for happy endings, and why so many of us feel a sense of disappointment if a book’s HEA doesn’t seem real to us. How many times have you closed a book thinking, “I don’t see them together forever”? When that happens, why doesn’t it seem as though they’re destined for a long-time love? And when you do read a book that satisfied you in that regard, what’s different?

My favorite romances always have fabulous endings. They may be sappy or otherwise baby-filled epilogues, but in general they are filled with a good-natured humor about the couple, who “get” each other, perhaps when nobody else has ever gotten them in the past. Either that, or they feature characters who may have experienced change throughout the course of the book, but who remain essentially true to themselves. Two pop immediately to mind when thinking about Calvin and Alice Trillin and the love they shared over 35 years; the ending of Jill Barnett’s Bewitching, and, perhaps surprisingly, the ending of Anne Stuart’s Ice Storm.

In Barnett’s book, the once stuff-shirted hero, whose life turned upside down after he fell in love with a witch, is precariously seated on a chair that is floating across the top of a room. One of his daughters is working on her magic, and it isn’t going altogether well. Eventually he lands…with a bam…but as the author wrote in my interview with her years ago, “by then he’d learned to hold on tight. So I thought that showed he had changed.” And, indeed, it did. It showed, through good-natured humor, a tolerance, a patience, and an ability to accept and nurture the imperfect, which this once anal-retentive Duke would have previously been incapable of doing.

On the other hand, the ending in Stuart’s book, as ever a marvel to me of succinct and effective writing, takes place in the heroine’s apartment after she and the hero have escaped death too many times to count. She’s just learned that he’s not the man she’d thought him to be, which pissed her off more than anything. The two, both stone-cold killers, define the term “world-weary.” She believes he’s gone from her life forever, and she’s left tired and cold in her bed when he appears in her apartment. She turns to him and says, “Come to bed. I can always shoot you in the morning.”

I recounted both of these endings, which are surely as distinct from one another as endings could be, because they illustrate two of the most important aspects of love; a sense of humor and unconditional acceptance. If you’ve read any of Trillin’s writing, you’ll know, even though he fictionalizes their lives like sit-coms (as he cops to in About Alice), that his marriage to Alice featured both, in strong doses. Neither aspect is something that jumps out at a person in the throes of a passionate love that hasn’t yet matured into a long-term relationship, but when I think about my own marriage, which indeed manages to remain passionate after too many years to count, it’s the laughter and acceptance that generally gets me through the day. Karyn Witmer, aka Elizabeth Grayson, wrote a guest column for me nearly two years ago that addresses the difference between what women at various points in their lives want to read, but I think that at any age, we crave acceptance.

Robin Uncapher, who also enjoys Trillin’s writing, didn’t read About Alice, but listened to it on audiotape. She mentioned that Trillin himself narrated, and remarked that while “he’s not a great narrator, there’s something very special about listening to his voice when he talks about Alice.” And then she said something that really struck a chord: When a man speaks lovingly about his wife, it makes him attractive. Throughout this book Trillin speaks of Alice’s professional accomplishments, the personal mountains she climbed, and the struggles she faced over and over again with humor, dignity, and optimism. Perhaps it’s because I read the book at the same time as I was working on a grant application to secure funding for New Beginning Center, a local domestic violence shelter, that Trillin’s love for his wife took on extra meaning. The contrast is phenomenal; as I wrote on my blog last week, a woman being beaten down in her life by the very man who should be lifting her up goes against the very core of what a marriage should be. And while many people don’t see marriage in and of itself as romantic (as, say, a wedding is considered romantic), among my definitions of true romance is the idea of a man and a woman supporting each other in every way throughout life.

So, Calvin Trillin may not be the handsome prince of a young woman’s romantic fantasies, but he fulfills the most important: He loved his wife unabashedly and well. That’s romance enough for me.

Are you in a marriage or long-term relationship of your dreams? Do you know of others in such marriages? What comprises that dream in your mind and heart?

What about romance novel couples? Which couples’ fictional HEA most closely resembles your fantasy of a forever kind of love? How might your ideal life-long love differ from other readers?

How foremost is a couple’s future happiness in your mind as you read a romance, and as you finish a romance?

Which romances feature couples whose relationships leave you feeling secure about their future happiness, and why? Which leave you feeling as though their passion will burn out or something else will lead to an untimely break-up?

What do you make of Robin’s statement that when a man loves his wife, it makes him attractive?

Do you read Calvin Trillin, and if so, when did you discover his writing, and what are your favorite Trillin reads? What about his writing tickled your fancy?

TTFN, as Tigger said to Winnie the Pooh,