the ask@AAR: Do you believe in destiny?

I’ve just finished reading Pachinko which I loved. It’s a multigenerational tale of Koreans living in Japan during the 20th and 21st centuries. One of the themes the novel explores is whether or not your nationality/race/ancestors define who you are. Lee, the author, makes a strong case that in places of great prejudice, it does. This I feel is true. I do not, however, believe in kismet or mystical destiny. END_OF_DOCUMENT_TOKEN_TO_BE_REPLACED

For voracious readers, a theme like “authors with more than one book in your TBR” yields almost an embarrassment of riches. It could be contemporary, historical, light, angsty – so many choices. In the end, we went for very different books, but we both found enjoyable reads. What authors do you have piled up in the TBR? END_OF_DOCUMENT_TOKEN_TO_BE_REPLACED

Do you finish all the books you start?

My rule for reading a book is, if after 100 pages more or less, I’m bored/irked/appalled, I quit. This, however, is just me. (For TV shows, it’s watch at least three episodes.) My best friend believes if she starts a book, she has to stick with it to the end. And while I support her in this (fruitless) endeavor, I struggle to see why we should give our time to words that, after a good effort, don’t work for us. END_OF_DOCUMENT_TOKEN_TO_BE_REPLACED

I am on my yearly week long vacation with my extended family of 21 and almost all the women in the group are reading books set in or around WWII. My daughter and I are reading Pachinko, which begins in the early 30s, my mom is reading a book about female code breakers in Britain, and on of my sister in laws is reading The Nightingale. END_OF_DOCUMENT_TOKEN_TO_BE_REPLACED

Sometimes the YA world is just… nuts.

As a reader who often heads to the Young Adult section first, I’m frequently called out by adults for my reading choices – usually by those who don’t know what the YA field is like and think I want something simplistic to read or that I never grew up or whatever “theory” is prevalent this week.

One of the latest Twitter controversies revolves around sex in YA novels, but with a new twist. These posts aren’t about demanding “clean reads” for teens or decrying sexual content in YA novels. Instead, some people (both fans and authors) are upset about adults reading YA and “hypersexualizing” the teen characters.

It has gotten so odd, some people have claimed they feel like alerting the FBI about YA authors who “hypersexualize” their teen characters. 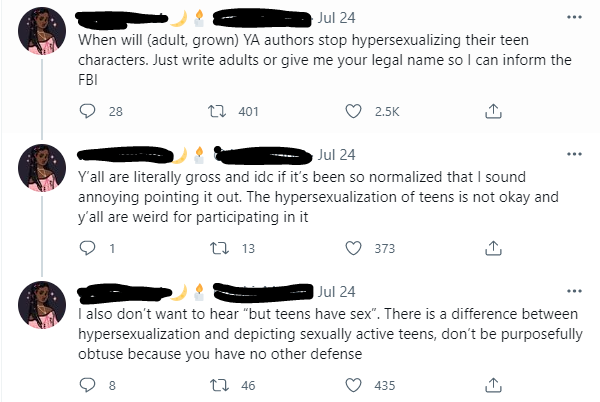 Oh, I’m sure it was meant as a joke. Sure. Some of the other posters aren’t joking when they suggest this sort of […]

Her Heart For a Compass – An Interview with Marguerite Kaye

Last week, Evelyn and I reviewed Her Heart for a Compass, a work of historical fiction based on the life of Lady Margaret Montagu Douglas Scott, an ancestress of the book’s author, Sarah Ferguson, Duchess of York.  When the book was announced earlier this year, I was excited to see that the it had been co-authored by historical romance author Marguerite Kaye; Ms. Kaye is something of a favourite here at AAR and has received much praise (and many high grades!) for her books.  If you are interested in how this partnership came about and in the authors’ working relationship, read on! END_OF_DOCUMENT_TOKEN_TO_BE_REPLACED

the ask@AAR: What stories make you ugly cry?

As I’ve mentioned before, I’ve spent the last year listening to the Harry Potter books. I am currently at the end of book six, Harry Potter and the Half-Blood Prince, and have just sobbed my way through the death of a beloved character.

I also sobbed my way through the finale of the last season of Unforgotten. That too had a death that gutted me. END_OF_DOCUMENT_TOKEN_TO_BE_REPLACED

the Way Back on Wednesday: The 2002 AAR Reader Awards!

2002 All About Romance Reader Awards

To all the winners in our sixth annual reader’s poll, congratulations and continued success! We had more entries this year than in any past year, and given the size and comprehensiveness of the ballot (with 23 positive and 6 negative categories), AAR pollster Shelley Dodge was kept extremely busy throughout the entire month the poll was open. To be a valid ballot, (at least) six categories had to have been filled out. As always, we received a number of bogus ballots (think authors trying to stuff the ballot box – naughty, naughty!), but even so, there were nearly 3,500 valid votes. END_OF_DOCUMENT_TOKEN_TO_BE_REPLACED

More Than the Clinch: An Interview with Romance Cover Artist James Griffin

If you’re a romance reader, chances are you’ve encountered James Griffin’s art. He’s been creating artwork for romance novels for an astounding 45 years, and he brings to his work an enthusiasm and energy that’s infectious. Griffin studied art at the Pratt Institute and was living the “young starving artist” life in New York City when a friend mentioned that he should consider book-cover artwork. The rest, as they say, is history. END_OF_DOCUMENT_TOKEN_TO_BE_REPLACED

the ask@AAR: Is there too much sex in romance for you?

My daughter has a romance book club–this makes me so happy–and the next book they’re discussing is Anne Calhoun’s Uncommon Passion. After reading it, she said she liked it but she was distracted by all the sex scenes. (The book was written in 2013.) Calhoun always went–wonderfully in this reader’s opinion–heavy on the sex scenes unlike many of her contemporaries (Shalvis, Milan, Kantra, Mayberry for example). Today, however, sex scenes in romance novels are often more plentiful and more detailed. Many readers expect to know exactly what happens behind closed doors (or in carriages, public buildings, convertibles, and alleyways….) END_OF_DOCUMENT_TOKEN_TO_BE_REPLACED