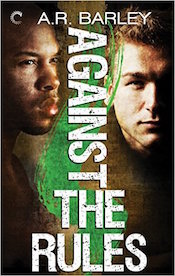 This is #2 in A.R. Barley’s Boundaries series series but can be read as a standalone. I cannot say this was my favourite novel by A.R. Barley but the writing is easy reading and there is an underlying sexy romance to enjoy. Kelly is a Residential Assistant at Halton University; he spends his nights off at a leather club, hoping to find the relief he is looking for in rough sex with strangers. One night he allows himself to get into a dangerous situation…but is rescued. His knight in shiny leather trousers is as surprised to be rescuing Kelly, as Kelly is being rescued.

Ian Larkin knows what Kelly wants—a true Dom, someone who will protect him instead of using him, someone who can take him to the edge without pushing him into unsafe territory. Ian feels, as a Dom, he knows just what Kelly needs, and he wants to be the man who can give it to him. However, he feels there is a problem, as Kelly is a student, and Ian is a teacher.

My first issue with this story may seem silly, but it seems from reviews and even the Goodreads blurb that many had the same one. The Dom in this story is called Ian Larkin, and for some reason, I kept reading it as ‘Ian Rankin’, which threw me out of the story each time. I suppose this proves how important character names are.

This is not quite the story it appears to be at first. The teacher is a professor Ian, but he is only twenty-nine. The student is not his student and is twenty-two. One of the problems I think is that this story tries to be all things to all people and fails. Although, there is no real reason these two may not date it is made into an issue by various convoluted subplots. Ian is a black man originally from Chicago, and there are too few queer stories involving POC, so I was looking forward to this side of the plotline. Good start, Ian is a professor at a university, but he has a no-hoper, gambling brother. Could we not have a POC with a good, supportive interesting family? This subplot was not really necessary to the main storyline.

The characters were rather bland and I did not feel any sexual tension. Physically, they were too perfect and I find it hard to empathise with stereotyped perfection. Ian is tall, shaven headed, powerful, muscular with skin the colour of nutmeg. Kelly is beautiful, raspberry lips formed a perfect cupid’s bow, blonde, blue eyed with a square jaw, and cheekbones sharp enough to cut glass.

The climax of the story neatly resolves everybody’s problems, but is too over quickly and a bit of a damp squib. Against the Rules could have been a really good novel as the writing is sound and the underlying ideas good, but it just didn’t work for me.

I'm an English romantic, and an author who simply adores reading and writing books. I believe that all love has equal status, and all humans need and deserve romance. So, I am thrilled to be able to review LGBTQ+ novels for AAR and introduce more readers to some gorgeous LGBTQ+ romances and fascinating stories.

Buy Against the Rules: