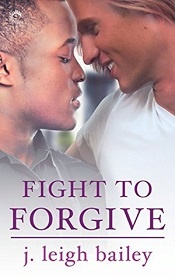 A combination of friends-to-lovers and lovers reunited, Fight to Forgive is the third book in the Letting Go series. While the different books do not seem to overlap in terms of characters, the stories revolve around a theme, like letting go of the past. I originally picked it up because I haven’t seen too many books I’d classify as New Adult featuring gay and bisexual main characters. While I enjoyed it well enough, I feel like the problems with the plot overshadowed the romance the author set up for us.

After a combat injury sends him back home, James “Freddie” Fredrick is miserable. Not only is he still in pain, he may never recover enough to rejoin his Navy team, the only place he has felt at home in the past four years, ever since Aaron Elliott inexplicably broke up with him. Aaron left without a word, asked Freddie not to contact him at all and never said why, leaving Freddie is completely in the dark.

At the same time that Freddie is dry-docked from his injury, Aaron finds out that his mother is selling the lake house that Aaron was left in his late father’s will. Instead of sitting back and avoiding conflict, something that Aaron has spent his entire life doing, he objects, putting a hold on the sale and visiting the town he hadn’t been to in four years. He certainly isn’t expecting to see Freddie, or to discover that Freddie is so incredibly angry at him.

Even with the anger and the betrayal and everything else, this is a really sweet, emotional romance. The drama built into the plot is a more domestic, everyday sort of thing. I also have to mention that I absolutely love that this is both an interracial romance and one featuring a bisexual character. But can I take a moment to ask a simple question: why don’t people ever talk? Aaron thinks Freddie is cheating on him, so he runs away – although to be fair, Aaron has an absolutely pathological inability to deal with confrontation, especially at this point in his life. He gets better about it later, but still… Freddie is pissed, and so refuses to ask Aaron about what happened fours year earlier. If they had talked, they probably would have dealt with all this pretty quickly.

At least the two of them are really cute together, once the anger dies down.

The thing is, even with the sweet romance, the chemistry between Aaron and Freddie, and the general likability of this book overall, I had a really hard time getting into it. The beginning of the story, with Freddie coming home and Aaron heading back to the lake house, seems to take forever, and by the time things really get moving story-wise, we are basically at the end of the book. Plus, the addition of Aaron’s admirer seems pretty out of place; I had trouble believing Aaron would go from talking with Freddie and trying to work out their issues to romancing someone else. Maybe he just doesn’t know how to say no?

As I said, though, I did like the romance between Aaron and Freddie. I also really enjoyed seeing the two different families – Freddie’s is warm and loving (and growing – his sister is heavily pregnant), while Aaron’s is colder, and pretty much the antithesis of a caring unit. Their families are a really easy way to explain a bit more about their characters. Aaron has trouble with confrontation because he was never supported. He’s an introvert who is regularly forced into situations (and into a life) that just don’t fit him. His mother and step-father are trying to get him to go into marketing, yet there is no way that would work for him. None. Freddie’s family, on the other hand, support his choices, even when they disagree with them. I liked seeing the differences, and how they led to the leads being two very different men.

Overall, the length and the story itself made me think of a contemporary category romance. For me, Fight to Forgive was just lacking that extra… punch. I had a hard time connecting with the characters, and the ending didn’t really make me believe in their happily ever after, though they certainly have their happy-for-now moment. I’m still hopeful for them, though – the focus on the day-to-day domestics makes me think that they have a shot at an actual future together. I just wish we got to see a little more of that. But I liked the writing style, and the premise itself was interesting, so I’m definitely going to have to give the author another read. Maybe I’ll pick up another book from this series.