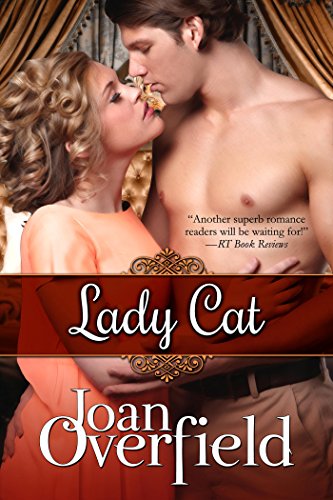 I’m always interested to see how older titles bear up over time and Lady Cat has a premise I rather like, so it was an easy choice.

That premise is one that is also featured in one of my favourite historical romances, Lorraine Heath’s Waking up with the Duke; that of a man who needs an heir but is incapable of doing the deed necessary to create one and asks his wife to sleep with someone else in order to become pregnant.  In that book, the storyline follows the central couple as they progress from the extreme awkwardness of having agreed to have sex with someone they wouldn’t normally have chosen (and in the case of the woman, she’s got to deal with the guilt of committing adultery, too) to their eventual falling in love during the period they spend together in order to pursue the babymaking activities. Lady Cat, however, takes things in a different direction by focusing more on dealing with the fallout a few years down the road.

Lady Catheryn Brockton married her older husband three years earlier after having been governess to his two daughters, Elizabeth and Lydia.  She is strongly attached to Edward and adores the girls to the extent that she would do anything to keep them safe, which is why, when her husband asks her to sleep with another man in order to provide him with an heir, she agrees to the plan in spite of her misgivings.  If Edward dies without a male heir, his estate will pass to his slimy toad of a cousin, Jeremey Sedgewood, who is not only in debt up to his eyeballs, but is also a “brutal, drunken swine” who has already tried to force his attentions on Cat and has his eye on Edward’s eldest daughter.  In order to keep her family safe, Cat agrees to do as Edward asks, and seeks out his second cousin, Stephen, Lord Rockholme at an upcoming house party.  Stephen is widely known to be an unrepentant rake and Cat should have no trouble seducing him; and as they have never met, he won’t know her true identity as she will attend the gathering under an assumed name.

Things go to plan; Stephen has recently rejoined his regiment and will be leaving for France in the morning, so is very much open to the prospect of a last-minute dalliance with a lovely widow.  The couple shares a night of intense passion and then they go their separate ways.

Fortunately for Edward and Cat, their scheme is successful and Cat gives birth to a healthy son, named for his (legal) father.  Five years pass. Edward dies not long after his son is born, and his will names Cat as executrix to the estate and co-guardian of the children, along with Stephen and the odious Jeremey, who proceeds to be a complete pain in the arse whenever he can, dropping by unannounced and behaving offensively towards Cat and the girls.  Returned to England after Waterloo, Stephen, whose experiences over the past five years have changed and matured him, intends to track down the woman who had gifted him with such pleasure, whose memory he had held close and whose image had sustained him through some of the worst times of his life.  He attempts to find her by writing to Edward’s widow, but is rebuffed, so instead he travels to Larks Hall to ask for information in person – and is dumbfounded to discover that the woman who has inhabited his dreams for the past five years is none other than Lady Brockton.  Stephen is furious at the deception, especially as he inadvertently cuckolded a man he liked and respected, and further incensed when he realises he’d been used as a stud and that Cat has intentionally kept his son from him.

Cat’s reasons are sound of course; any hint that Eddie is not the son of her late husband will mean the odious Jeremey will have cause to challenge the terms of Lord Brockton’s will and possibly overturn it.  In the heat of his anger, Stephen is determined to hurt Cat as she has hurt him, and insists that she provide him with the heir she has denied him.  He can never acknowledge Eddie as his son, so he and Cat will marry so that she can bear Stephen an heir who can inherit his lands and title.  Cat fully recognises that Stephen is entitled to be angry, but even so, is not prepared for his insistence that they marry and then part once she has given him a son.  She has little alternative but to agree, but has a condition of her own, which is that they pretend, for the sake of Lydia and Elizabeth, that they are marrying for love.

Lady Cat is an emotionally charged, angsty story in which the author skillfully guides her characters through the messy, complicated emotions that follow Stephen’s discovery of the truth.  Tensions between him and Cat run high and that includes tension of the sexual variety; their marriage might begin under less than auspicious circumstances, but there’s no denying the passion that sparks between them in the bedroom.  They are complex, likeable characters, and I was pleased with the way the author developed the story without veering into Big Mis territory, so that instead of a couple at loggerheads for an entire book, we get two sensible, mature characters who talk things through and arrive at decisions together.  Cat is a beautiful, spirited and intelligent woman who cares deeply for her son and step-daughters, sometimes to the extent that she puts them before all other considerations and ignores her own needs and wants, which does cause a little conflict between her and her husband.  And Stephen is terrific hero; it’s true that he lashes out when he’s hurt, but he quickly recognises that he is being unjust and is able to set those feelings aside in order to try to build something real with Cat, and be a good father to his son and step-daughters.

Lady Cat was originally published in 1998, (digitally reissued in 2014) and has definitely stood the test of time.  I’d encourage fans of character-driven historicals to give it a try.