Tales From the Gunpowder Academy - Love in the Time of Engines 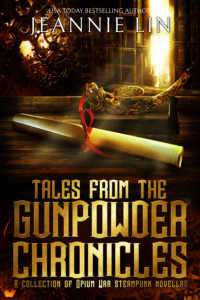 Although Tales from the Gunpowder Chronicles features three separate steampunk novellas, I only read and reviewed the third novella, Love in the Time of Engines.  The other two novellas are standalone stories; LitToE is a prequel to Gunpowder Alchemy, published in 2014.

LitToE is tough to grade.  Not because I didn’t enjoy it.  I did.  It’s absorbing and interesting, and a refreshing, welcome change from the european historical romances I regularly read.  The challenge is whether I grade it as a standalone novella with some problematic loose ends, or grade it as a prequel assuming some of these loose ends are wrapped up in the novel that follows (which, for the record, I haven’t read.  Yet.).  The grade is a compromise; Love in the Time of Engines is a great read – masterfully baiting the hook for the rest of this series – but as a standalone, the conclusion is a disappointment.

A year ago, imperial messengers had come to Anhui province with a special summons for “scholars of undiscovered talents in science and mathematics.”

Shi Anlei is almost their perfect candidate.  A mathematics prodigy with dreams of attending the Academy and sitting for the Imperial Exam, Anlei longed for a chance to prove herself.  But since girls were barred from attending the Imperial Academy, taking the imperial examination or accepting a scholarly appointment, Anlei is resigned to a life in the country.  Her tutor, a somewhat unconventional woman who tutored boys and girls, isn’t.  Unbeknownst to Anlei, Mistress Wang plotted and planned to send Anlei anyway.  When LitToE begins, Anlei has left her family and home behind, traveling on a gunpowder crawler bound for the Imperial city of Peking.

A month ago, Anlei had shaved back her hairline and braided her long hair into a traditional queue.  She’d wrapped her breasts tight with a band of cloth.  The high-collared mandarin jacket she wore was buttoned all the way up to her chin to cover up the lack of know at her throat.

When ‘Shi Han’ arrives, Peking is nothing like she expected.  It’s confusing and loud, and the Imperial Academy is nowhere to be found.  After an hour spent wandering the hutong maze, she spots a young man dressed in scholars’ clothing.  Despite her fear of discovery, Shi Han approaches and asks him for directions.  After an awkward exchange, Jin Zhi-fu, the handsome scholar, agrees to show Han the way.

Zhi-fu has already taken the imperial exams twice.  If he fails again, he’ll be forced to return home in shame, and work alongside his father, an appointed official of the Ministry of War, on the frontier defense in the northeast.  It would either be an imperial appointment or the garrison.  A life of science and learning or cannons and gunpowder.  Popular and well-liked by his peers, ambitious and determined to pass, Zhi-fu has lost the optimistic, naiveté that marked his first two years in Peking.  But with rumors of steam propelled airships in the West, Zhi-fu is determined to pass and earn a place at the Ministry of Science.  After spending some time with old friends (who also failed to pass in previous years), Zhi-fu spots Han emerging from the headmasters office.  He assumes young Han has failed to earn a place at the academy, but soon realizes he’s mistaken; after helping his new young friend to find a place to stay (in the storage closet adjacent to his room), he spies on him in class the following day.  It’s quickly apparent to Zhi-fu (and others) that behind Han’s shy and reserved persona lurks a clever, brilliant mind.

From the moment Anlei meets Zhi-fu, she feels a frisson of attraction to him.  It doesn’t hurt that he’s also generous, kind, and protective of Anlei in her role as country bumpkin Han.  Meanwhile, Zhi-fu remains remains blissfully ignorant of her gender, but is attracted to Han’s mind and unwavering dedication despite his meagre circumstances and limited resources.  The contrasts between them – at least the version they reveal to each other – are extreme.  They have wonderful chemistry anyway; despite their differences, they form an unlikely and intense friendship – a seemingly impenetrable bond, forged by the challenge of passing the examination.  Unfortunately, the very nature of their relationship ensures they keep their deepest, truest selves hidden.

From the outset, I was fully immersed in Ms. Lin’s early nineteenth century Peking, and Anlei and Zhi-fu’s place within it.   We mostly see Peking through Anlei’s unworldly viewpoint – her confusion and awe, pleasures and frustrations, her successes and failures.  The Imperial City, the academy… all of it is strange and new and scary and marvelous, and Ms. Lin masterfully renders it through Anlei.  Meanwhile, she slowly and carefully develops her principal characters, confiding their individual hopes – Anlei’s struggle to break free from the barriers of her sex to realize her dreams and Zhi-fu’s doubts and worries about his own place in the world.  At the same time, Lin ratchets up the tension inherent in Anlei’s subterfuge – with Zhi-fu, amongst their friends, and at the Imperial Academy – keeping readers on edge alongside her heroine.

Zhi-fu predictably discovers Anlei’s secret, and somewhat less predictably, he freaks out.  Reader – even though you knew it was coming – his reaction is devastating; proving Anhei right when she decided he couldn’t be trusted with the truth.   Zhi-fu, despite his own struggle to forge an identity separate from his father and his somewhat enlightened worldview, immediately reverts to patriarchal type.  He ignores Anlei’s entreaties and explanations, and lashes out.  Oh reader, you’re waiting for me to tell you it all works out right?  It does… sort of.  Zhi-fu’s immediate reaction proves to have lasting repercussions, but this is a romance!   Anlei and Zhi-fu do get past this major roadblock, but even while I enjoyed their new romantic relationship (a lot!), I struggled with the implications of Zhi-fu’s selfish choices.

While the set-up, characterization of the principal characters, and the world building are supremely well realized, ultimately LitToE stumbles and falls short of the DIK as it winds its way to an unsatisfying conclusion.  The final quarter is tragically underdeveloped, and I assume it’s because the author continues this story in Gunpowder Alchemy.  I’m guessing shifty secondary characters are more fully realized, and Anlei’s future is better defined.  Unfortunately, the story length here doesn’t give the author quite enough time to sell us on the final chain of events, and I was still struggling with my feelings about Zhi-fu.

Buy it at: Amazon or visit your local independent bookstore

Buy Love in the Time of Engines by Jeannie Lin:

This sounds great! I haven’t read The Gunpowder Alchemy but this might be a good entry to it.

This review really needed one more paragraph to reinforce how much I enjoyed the story – everything about it is terrific, except the ending. I’ve maybe done some investigating on my own re: the novel that follows, and unfortunately, I don’t think readers get a satisfying conclusion to the Anlei & Zhi-fu storyline. Regardless, this story is terrific and the authors depiction of China at this time is vividly rendered. I was wholly absorbed in these characters and their lives – the good and the bad – and this setting. I barely touched on the romance because it happens so late in the story, but it is lovely as well. Sensual and tender…it’s all so well done and makes the ending that much more disappointing.

0
Reply
wpDiscuz
You are going to send email to
Move Comment
...