Nicole Severn’s Profiling a Killer is the first book in a new, multi-authored Romantic Suspense series featuring the characters who make up a BAU – Behavioural Analysis Unit – of the FBI based in Seattle.  It started well, but it wasn’t long before it became mired in cliché and dumb behaviour that made me question – repeatedly – the supposed intelligence of the characters.  The author attempts to give the two leads some interesting backstory, but the way this has affected them is told rather than shown (some of it so often it was like being hit over the head with it) and the identity of the killer was easy to work out.  Which all adds up to another not-great romantic suspense read.

Three years before this story begins, Nicholas James, Seattle BAU’s top profiler, helped to put away the serial killer known as the “X Marks the Spot Killer” because he would carve an X into the cheek of his victims and then leave clues as to the location of the body.  Cracking the case cemented Nicholas’ stellar reputation, but was devastating for him personally, as the murderer turned out to be someone he knew well and had grown up looking to as a father figure after his own father left when Nicholas was ten.  That discovery changed him, making him reluctant to trust and unable to take anyone at face value.

When Profiling a Killer opens, Nicholas has been called in to investigate the death of a young woman named Kara Flood, whose murder bears all the hallmarks of the X Marks the Spot killer. The victim was the sister of Dr. Aubrey Flood, the medical examiner who worked with Nicholas three years before and whose painstaking work on the autopsies of the killer’s final three victims finally brought to light the evidence needed to convict him.  Given the circumstances of her sister’s death, Aubrey specially requested Nicholas work the investigation;  and although she knows she can’t be officially involved, she needs to see that her sister gets justice and help that happen if she can.

It’s clear that there is a copycat out there – could the choice of victim somehow point to Aubrey being their real target?  Given her involvement with the previous investigation it seems likely – and Nicholas is determined to do everything he can to keep her safe while also tracking down the killer.

There are good ingredients in this book – a clever unsub who seems to be one step ahead, personal connections to this particular case, and the concept of a murderer copying different MOs – but unfortunately the resulting bake is a complete disappointment.  Aubrey is abducted by the killer not once, but twice, the first time managing to free herself from a situation I doubt even Houdini could have got out of, and the villain proves themselves to be far cleverer than the supposedly brilliant Nicholas and his team several times over.  On one occasion they manage to draw Nicholas, Aubrey and two other BAU members (who are heroes and heroines of future books in the series) to a remote location, incapacitate the other two agents, best Nicholas in a fight and throw him into the sea.  Aubrey – while wearing clothes and a heavy bullet-proof vest – jumps into the waves and swims with an unconscious body against the tide, then manages somehow to lift him onto a pier, only to get nabbed by the killer once Nicholas – who has been badly roughed up and half-drowned – has regained consciousness and gone off to look for his colleagues leaving Aubrey on her own.  And then there’s the scene before that where Nicholas gives Aubrey a gun and tells her to use it if she has to, when she clearly states she’s never fired one and has no idea how to handle one.

See what I mean about the dumb?

Sadly, there’s plenty more where that came from.

As to the romance… Again, it had potential, but in the end there’s no chemistry and no connection between Nicholas and Aubrey at all.  We’re told they had been attracted to each other when they first met three years before and had never really forgotten each other, and we’re told they’re attracted to each other now, but nothing I read convinced me of that. Nicholas’ personal relationship with a serial killer is mentioned in passing but never explored, and if I read how Aubrey had “dedicated her entire life to giving family members answers they needed as to how their loved ones passed”  or how she’d “sacrificed her own needs in order to help strangers cope with their loss and to find the truth” once, I read it ten times – possibly more – and after the third or fourth time it really got on my nerves.

I’m not having as much luck with Harlequin’s Intrigue line as I’ve had with their historical romances.  Perhaps the shorter page-count doesn’t allow enough space to properly develop a romance AND a suspense plot, but Profiling a Killer does have a decent premise and the bare bones of a good story.  (Which is why it gets a low C instead of a D). But that’s ruined by an over-reliance on cliché, weak characterisation and a non-existent romance.

Buy it at: Amazon or your local independent retailer

Whelp! At least the cover model is cute.

I’m not keen on the cover. It’s too busy, and gives the impression of an artist trying to cram in everything rather than selecting a few good elements that would show even in a thumbnail.

I think the “collage” is of other characters in the series – but yes, it’s busy. The UK cover is different – it just uses the main photo on a plain background, which is the series brand. 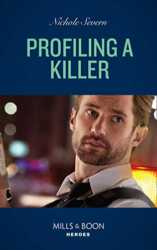