The Harder He Falls 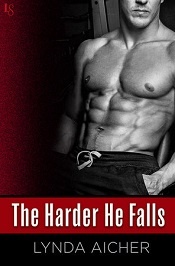 The Harder He Falls is the first book in Lynda Aicher’s new series, which follows the lives and loves of the men involved with extreme sports company, Kick. This first novel involves Grady Kelley, who has just started working for Kick as a white water rafting guide. Grady joined the company to work with his cousin Finn, who helped set it up, and has been there a month. Right at the beginning of the story, we learn how close Grady and Finn are and that Finn is currently in a coma after an accident for which Grady blames himself. Grady is currently suspended from work pending an investigation of the accident.

This opens the way for these two men to get to know each other and explore the obvious physical attraction between them. Their meeting doesn’t quite go as expected and includes Micah suffering from what seems to be a seizure or balance problem, in the bar.

The Harder He Falls,is basically the story of two men who have had a hard time and how differently they deal with their problems. Grady is so full of guilt, angst and self-pity that he is spiralling downwards into panic and despair. Whereas Micah has severe issues to deal with every day as the result of his coma, but he deals with them with grace, self-deprecation, and many coping strategies. Micah is a big man with a big heart and although, I am sure, the story is meant to show how the two of them save each other, it’s really very one-sided. They have a mantra not saving, helping, which is applied to various situations, but I’m afraid I found Grady rather annoying by the end.

The writing is good and confident, but relies on my least favourite trope – ‘I’m not good enough for them, they are better off without me’. I nearly always find myself saying ‘let them decide that!’ Although, the bar/club is a leather bar and it turns out all the partners at Kick are Doms, it isn’t a BDSM novel per se. I liked the idea that Micah was dominant but not a Dom and Grady had submissive elements about him, but was not a sub. The author then ruined what could have been an interesting quirk by reminding the reader that Grady had a bad experience of a Dom in the past, but wasn’t a sub, on almost every page. For such a highly experienced author this part was written with a very heavy touch.

I'm an English romantic, and an author who simply adores reading and writing books. I believe that all love has equal status, and all humans need and deserve romance. So, I am thrilled to be able to review LGBTQ+ novels for AAR and introduce more readers to some gorgeous LGBTQ+ romances and fascinating stories.

Buy The Harder He Falls: