The Slave and the Free 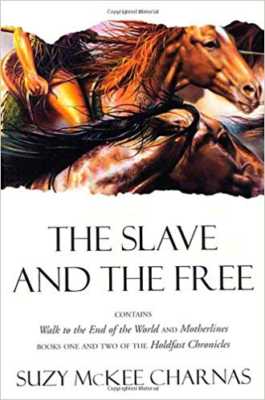 Did you read The Handmaid’s Tale and think it just wasn’t bleak enough? If so, have I got a recommendation for you. The Slave and the Free, by Suzy McKee Charnas, is set in a world where women aren’t just considered men’s property. Here, women aren’t even seen as human.

The Slave and the Free is a duology, comprised of Walk to the End of the World and Motherlines, the first two books in the Holdfast Chronicles.  The Holdfast is one of the last settlements to remain after the collapse of civilization. Men rule, while women provide slave labor and food (there’s a place called a milkery, and you can imagine what happens there). Women are also needed for reproduction, though right-minded men treat breeding as an unpleasant duty. Love and fellowship can only occur between equals, which also means there are no parent-child relationships. While most men consider themselves above base instincts and depravities, their stratified society encourages paranoia and power games.

And sooner or later, someone will refuse to play by the rules.

Walk to the End of the World starts when Eykar Bek, keeper of Endpath, abandons his position as guardian of a place where pilgrims go to die. His appointment to Endpath was meant to separate him from society, because Eykar is a freak. Alone among men, he knows his father’s name, because his father kept tabs on the woman he impregnated, and identified the child she bore as his. Older men, called Seniors, live in fear that younger men will supplant them, so Eykar is uneasy about his father’s purpose for him.

Therefore, when he goes AWOL, the Seniors believe he’s set out to kill his father. They locate Servan, Eykar’s only boyhood friend and on-again off-again bedmate, and ‘persuade’ him to find Eykar. Servan is a manipulative lowlife, but these are desperate times. So desperate, in fact, that a woman is sent along with Servan as a courier. Her name is Alldera.

I found the book only mildly interesting up to this point, and that was because of the novelty of the worldbuilding rather than because I was invested in the fates of Servan (too sociopathic) or Eykar (too neurotic). But while Alldera has nothing in the way of looks, her muscular legs make her a good runner, and behind her flat features is a mind planning a way out of the Holdfast. The two journeys – Eykar’s, to find his father, and Alldera’s struggle for freedom – finally come together, and Alldera escapes into the wilderness.

Though not without the fallout of her travel through the Holdfast, since during that time, she was raped. So as if it wasn’t enough to be starving and alone in the wild, she’s pregnant. She finds a food cache, which saves her life but which makes her aware that other people are out there, and soon, two horse-mounted women track her down. They belong to a society called the Riding Women.

That’s how Motherlines begins, and I enjoyed it. Alldera is now free in a tribe of women, and at first it’s as heartwarming as life can possibly get in a post-apocalyptic wasteland. The Riding Women are descended from experimental subjects altered to reproduce parthenogenetically – without the need for fertilization from males. Riding Women give birth to identical copies of themselves, preserving their ancestral Motherlines, but this also means their society is biologically stagnant. As a result, they welcome Alldera’s baby, someone with new traits who will nevertheless grow up following their customs and beliefs (thankfully, the child turns out to be a girl).

This was a fascinating part of the story, exploring another culture. The Riding Women are not the violent misogynists of the Holdfast, but they have their own flaws. Even one of Alldera’s sharemothers – the women who help raise her daughter, a joining of people who can never share a genetic link – despises her for carrying the shadows of her past with her. And Alldera struggles to find a place where she belongs, whether it’s with the Riding Women, the ‘free fems’ – a small group of women, who like herself, escaped from men—or even back in the Holdfast. Except when she goes back, it won’t be as a slave.

If you make it through Walk to the End of the World, reading Motherlines will be a reward. I liked looking into what’s almost the exact opposite of the Holdfast – even their names show how poles-apart they are, since the Riding Women find their freedom in being nomadic while the Holdfasters cling tightly to the remnants of civilization that they have. The characters in Motherlines are also a lot more engaging to read about, and Alldera comes into her own in this book. I’d give the first half of The Slave and the Free a C and the second half an A, making the overall grade a recommendation.

(Please note that links to ebook formats go to Walk to the End of the World.)

I'm Marian, originally from Sri Lanka but grew up in the United Arab Emirates, studied in Georgia and Texas, ended up in Toronto. When I'm not at my job as a medical laboratory technologist, I read, write, do calligraphy, and grow vegetables in the back yard.

Buy The Slave and the Free by Suzy McKee Charnas: