Until the Day I Die 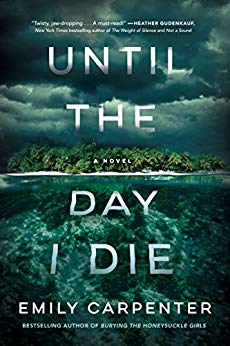 Until the Day I Die is the first book I’ve read by author Emily Carpenter, but I’d been hearing some great things about her writing for several months before I finally picked it up. It’s a psychological thriller about a mother and daughter, both of whom are trying to come to terms with the mysterious death of the most important man in their lives, and while it didn’t turn out to be quite as spectacular as I hoped it would be, it’s still a book I’m glad I read.

Erin hasn’t been the same since her husband Perry’s death four months before the story opens. She’s just going through the motions of life, hoping against hope that her terrible grief will lift sometime soon. Plus, she’s struggling to figure out what to do with the hugely successful tech company she and Perry started with two of their closest friends. There’s a part of her that loves the idea of keeping the company going in Perry’s honor, but another, more sensible part knows she just can’t make it work without him.

Erin’s daughter Shorie is eighteen and is starting her freshman year of college. She hates the thought of leaving home and not being a part of the daily running of her parents’ tech empire. She worries about how her mother is coping with everything and is starting to grow suspicious of some of the people working for Erin. Is it possible one of them is responsible for the accident that took her father’s life? Shorie doesn’t have the answer, but she’s determined to find it, even if she has to do it from hundreds of miles away.

Then Erin starts acting strangely. She begins drinking more than she ever has, and she even shows up drunk to a college party – where she and Shorie have a terrible argument. It’s obvious to those closest to her that Erin needs help, and what better place to get it than a remote island getaway? At first, Erin isn’t sure she wants to spend several weeks at a spa, but Shorie, with the help of some of Erin’s coworkers, persuades her it’s for the best, and so Erin boards a plane and heads off on vacation.

Over the next few days, both Erin and Shorie grow ever more convinced that the people around them aren’t who they say they are. Shorie finds evidence that someone has been tampering with one of the projects her father was working on before he died, and Erin becomes convinced she wasn’t sent to the spa for something as harmless as a retreat. Is it possible she was actually sent there to die?

The story is told in alternating chapters from the perspectives of both Erin and Shorie. I found Shorie’s chapters slightly more engaging, due in no small part to the remarkable technology she is involved with. It’s obvious Ms. Carpenter did a great deal of research into the future of this evolving field, and it definitely paid off! Erin’s chapters were interesting, but some of the predicaments she managed to get herself into seemed a little far-fetched. It’s not that the story Ms. Carpenter is telling couldn’t happen, but it put me in mind of something you’d see in a made-for-TV movie, not a twisty thriller.

The cast of characters is relatively small, so the identity of the villain was pretty easy for me to guess. Fortunately, the motivations of this person were quite a bit less obvious, so the book wasn’t spoiled when I guessed who was responsible for all the terrible things happening to Erin and Shorie. There are also a couple of smaller twists about midway through the story that surprised me quite a bit.

Both Erin and Shorie are likable heroines, though I did find myself able to identify with Shorie a bit more than her mother. I love that the author allowed each of them to possess distinct strengths and weaknesses. Neither of them is portrayed as a paragon of virtue, a fact I always appreciate. Erin could be a bit whiny at times, which is a personal pet peeve of mine, but I applaud the author’s ability to create characters that felt real and believable, even if the circumstances of their lives sometimes required me to suspend my disbelief quite a bit.

Until the Day I Die is far from a perfect book, but I found myself quite willing to settle into it despite its flaws. Ms. Carpenter has a way of making the ridiculous seem a little more plausible than it might have in someone else’s hands. I hear this novel is quite different from others she’s written, and I’m eager to check out her backlist.

I'm Shannon from Michigan. I've been an avid reader all my life. I adore romance, psychological fiction, science fiction, fantasy, and the occasional memoir. I share my home with my life partner, two dogs, and a very feisty feline.

Buy Until the Day I Die by Emily Carpenter: