Below you will find the latest installment of my Romantic Couples in History. Again, these two people are by no means conventional, yet they have always struck me as devoted to one another in a time of strife and treachery. I hope you enjoy their story. 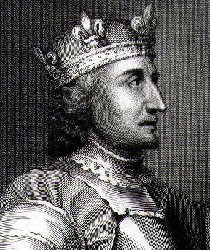 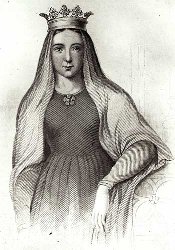 King Stephen has never been acknowledged as one of England’s most appealing kings. He usurped the throne from his cousin, Maud, after swearing an oath to support her, and was ineffectual in his rule. This lead to a period of anarchy in England as the barons reigned over their land as they pleased,wreaking havoc and causing pain to many.

In one respect, however, Stephen cannot be faulted. His marriage to Matilda of Boulogne, appears to be one of mutual devotion and love. She stood by him and fought for him through one of the darkest periods of English history, advising him, though he did not always heed her words.

Born around 1096, the son of Adela (daughter of William the Conqueror) and Stephen, Count of Blois, he was sent to his Uncle Henry’s (King Henry I) court in England as a young boy after his father died in the Holy Land. From all accounts he was a pleasant young man who charmed all who encountered him. “He was in fact, a thing acknowledged to be very uncommon among the rich of the present day, rich and at the same time unassuming, generous and courteous; moreover in all the conflicts of war or in any siege of his enemies, bold and brave, judicious an patient.” (1)

Matilda was the daughter of Eustace, Count of Boulogne and Mary, daughter of Malcolm Canmore, King of the Scots and his wife Margaret, of the royal house of Wessex. As their only child she was heiress to much land and wealth, so Stephen (a younger son) gained much when his Uncle Henry arranged their marriage.

They had five children: Eustace, Count of Boulogne; William, Earl of Surrey, Mary and two children who died young, Baldwin and Matilda. Though Stephen did acknowledge one illegitimate child, Gervais of Blois, he was born at least five years before Stephen and Matilda’s marriage. When you consider that his uncle Henry acknowledged somewhere in the vicinity of twenty illegitimate children, a good number of whom were born after his marriage in 1100, (2) it appears significant that Stephen’s only offspring after 1125 were those begotten on his wife.

The first ten years of their marriage were fairly uneventful and four of their five children were born during this time. As Count and Countess of Boulogne they spent at least some of their time there as well as in England.

]]>Support our sponsorsOn December 1, 1135, however, Henry I died, supposedly after eating too many stewed lampreys. Stephen hurried back to England and was crowned on the Feast of St. Stephen (Dec. 26), despite the fact that twice during the 1120s all the nobles of England had sworn fealty to his cousin Maud, widowed Empress of Germany. Her brother, William had drowned in 1120 when the ship he was traveling on sank, leaving her the only heir to the crown. Now married to Geoffrey, Count of Anjou, she did not take kindly to having her throne usurped. But troubles on the Continent meant she could not avenge her loss for a few years.

In 1139, supported by her half-brother Robert, Earl of Gloucester (an illegitimate son of Henry I) she began her mission by travelling to England. Within two years she and her followers had won a major battle (Lincoln) and Stephen lay in chains in Bristol.

Matilda, however, was not one to sit back and just let her husband remain in jail, especially once Maud was driven from the capital after angering the citizens of London with her arrogant demeanour: “The queen was admitted into the city by the Londoners and forgetting the weakness of her sex an a woman’s softness she bore herself with the valour of a man…;the king’s lieges, wherever they were scattered throughout England, she urged persistently to demand their lord back with her; and now she humbly besought the Bishop of Winchester, legate of all England, to take pity on his imprisoned brother and exert himself for his freedom, that uniting all his efforts with her he might gain her a husband, the people a king, the kingdom an champion.” (3)

The Bishop, Henry of Blois, had actually changed sides and supported Maud, but after seeing that she was not popular with the people he soon realized that his best interests lay in restoring his brother to the throne. He rallied the barons, but again, Matilda was not content to leave all to the men: “The queen likewise, with a splendid body of troops and an invincible band of Londoners, who had assembled to the number of almost a thousand, magnificently equipped with helmets and coats of mail, besieged the inner ring of besiegers from outside with the greatest energy and spirit.” (4)

Within months the king’s side, led by the queen, had captured Robert of Gloucester. Though Maud was not willing to trade him for the king, his wife Mabalia (who acted as custodian for King Stephen) was and after protracted negotiations the two men were exchanged and Stephen returned to Matilda’s side.

The war dragged on with no real victory on either side until an uneasy peace was reached in 1147 when Robert of Gloucester, Maud’s chief supporter died and she returned to Anjou. Stephen and Matilda founded a monastery at Faversham as a thanks for the peace and sponsored the Order of the Temple through the donation of a number of her properties in both England and Boulogne. He and Matilda spent the majority of his reign in England and, aside from the time they spent apart in 1140 and 1141, there is no mention of them not living together. If anything, her role in freeing him from Maud proved how much he needed her. Sadly, no record of any correspondence between them remains.

There seems to be little question among historians that Matilda’s death in May, 1152, was a major blow to Stephen both personally and politically. Though her most dramatic show of support was her part in rallying the kingdom to Stephen in 1141, she also betrothed their son and heir, Eustace to the sister of the King of France and negotiated a peace treaty with Scotland. Not only was King David her uncle, but she was clearly astute enough to realize that with Maud threatening on one side, it would be wise to have peace with England’s neighbour to the north. (5) Even when Stephen quarrelled with the Church, resulting in an Interdict being laid upon the country, there is no mention in any sources of Matilda not supporting him. David Williamson even goes as far as to say that “Stephen was even more of a broken reed without her and survived her by a little over two years.” (6)

In the end, after the death of his son Eustace (who proved himself to be a rather unlikeable character) in August 1153, Stephen met with Maud’s son Henry, Count of Anjou, Duke of Normandy (and new husband of Eleanor of Aquitaine) and concluded a treaty, whereby Henry was named his heir, but he would remain as king until his death. Stephen and Matilda’s surviving son William was guaranteed his inheritance. The barons of England were tired of war and they left Stephen and Henry with little choice but to find a permanent solution, though the negotiations took several months. (7)

Less than a year later, on October 25, 1154, Stephen died and was buried beside Matilda and Eustace at Faversham Abbey. So ended the reign of a king who had ruled foolishly, yet loved wisely.

This is another tragic tale in English history. Not only did William die, but so did all of his companions. Only a Norman butcher survived the wreck just off Barfleur. All evidence pointed to the fact that both crew and passengers were inebriated and thus less able to help themselves, while William of Malmesbury, in his Chronicle, relates that William insisted on turning his lifeboat around to rescue his half sister (an illegitimate child of Henry I), the Countess of Perche. “Touched with pity, he ordered the boat to return to the ship, that he might rescue his sister; and thus the unhappy youth met his death through excess of affection: for the skiff, overcharged by the multitudes who leaped into her, sank, and buried all indiscriminately in the deep.” * At least one of Henry I’s other children died on the ship, along with one of Stephen’s sisters and other members of some of the noblest families in England. Had the captain and his passengers only restrained their imbibing that night, much of English history might have been different.

* Giles, J.A. (Ed.). William of Malmesbury’s Chronicle of the Kings of England from the Earliest Period to the Reign of King Stephen. London. Henry G. Bohn. 1847, 456

Click here for Teresa’s research sources on Stephen and Matilda