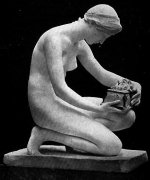 The Pandora’s Box feature was discontinued in July, 2006.

Those of you familiar with the myth surrounding Pandora’s Box know that the contents of the box are unexpected. However, unlike the mythic box, we hope not to unleash chaos here!

We instituted a number of changes to Pandora’s Box in April 2006 based on a user survey conducted earlier in the year. Linda Hurst is now being joined by a different AAR reviewer each month, the books being discussed in PB are not [also] reviewed, and PB books are now receiving grades. We are working on a database improvement to accomodate the need for two grades per book, but until then, the two PB columnist’s grades will be averaged together in the grade field of the database, with the individual grades being listed at the start of the column.

Pandora’s Box debuted in late 1999 as a collaboration between Linda Hurst and Carol Irvin – it was a rousing success. About a year later Blythe Barnhill became PB’s co-columnist, and she and Linda worked together on this feature through February of 2006.

While in the past this point-counterpoint column occasionally contained spoiler information, because PB books now are receiving grades, they are considered reviews. As such, there will no longer be the possibility of spoilers.