When it comes to the gay romance I like them best with at least a touch of magic; it can make for fascinating worlds and thrilling conflict. But sometimes it’s tough to find a book that’s just right. That’s when picking up an anthology is the perfect solution.

So when I considered the selection of magical heroes I would like to recommend I decided to spotlight one of my favorite anthologies: Charmed & Dangerous, edited by Jordan Castillo Price. From shape-shifting princes to hard-boiled detective mages these short stories and novellas represent a fabulous mix of magic and romance. They also serve as appetizers to the longer novels and numerous series. 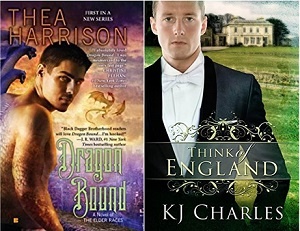 As a reader I’m often guilty of sticking with the authors or genres of romance that I’m most comfortable with.  I won’t call it a rut necessarily… but taking a close look at my reading shelves I see that European historicals with a male/female relationship dominate.  A few months back the lovely ladies here at All About Romance started talking about the choices we make at the bookstore and I was surprised to see that we all seem to stick fairly close to our favored genres in the books we review.  Em Wittmann and I used that discussion as a springboard to take a walk on the wild side by each choosing a book for the other to read – outside of our usual genres.

An interview with Cara McKenna 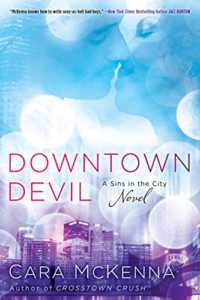 Haley: Firstly, thank you again for taking the time out to do an interview. I read Downtown Devil and I wanted to let you know I loved it. I’ve read quite a few ménage books over the years and I think this is the first time I have seen one where there is passion between the two men, rather than it being two men essentially competing for the woman. What made you decide to have that intimacy between Mica and Vaughn?

Cara: Purely because I wanted to write full-on, no-holds-barred male/male sex again, in the context of a m/m/f ménage. It’s been a while. You get a little taste of m/m in Crosstown Crush, but you’re right, in that one there’s a definite streak of competition tempering the men’s contact…and […]

An Interview with Alexis Hall

Alexis Hall has just released his debut novel, Glitterland, to wide acclaim. It’s a four and a half star read on Goodreads. Library Journal gave it a starred review and deemed it “Highly recommended.” Alexis and I are Twitter pals so I asked him if he’d be willing to be interviewed for AAR. He said yes. I sent him my questions and, though he was on vacation and typing on his phone, he sent me the following resplendent replies.

1) I’ve rarely read a romance with such polar opposite leads. Both men fascinated me. Can you tell me a bit about how you came up with Darian and Ash? Who came first?

It’s pretty straightforward actually: Darian came first. Last year, there was a contestant on the UK X Factor called Rylan Clark who was this, well, sparkling glitter pirate of a man. Obviously Darian isn’t Rylan Clark, because that would be deeply […]