The Arms of Scotland

]]>Support our sponsorsLLB: When Anthony McGowen wrote me last month and told me that Arnette Lamb had named the villain in her last book for him, he certainly piqued my curiousity, especially because the book was such a disappointment to me in comparison with her delightful Highland Rogue. It seems Anthony had asked her about some historical inaccuracies in her writing at a conference and she had taken umbrage at his impertinence.

When I asked about the inaccuracies, he mentioned to me the numerous romances he’s read in which Highlanders sheath their dirks in their hose. My impression of the dirk from the reading of numerous historicals was that it was a fairly small knife. Apparently I’ve been mislead, and Anthony clears it all up below, in his discussion of the Arms of Scotland. . .

In writing romance novels that have their setting in Scotland of old, there seems to be a lot of confusion regarding the carrying of weapons. This has been especially true in regards to the “Dirk” and the “Sgian Dubh.” These two “knives” have been confused with each other in so many of the novels I have read that I stopped keeping count. 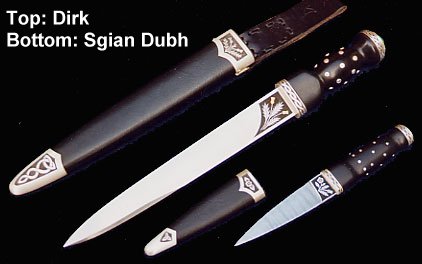 The Sgian Dubh: Literally translated from the Gaelic “Black Knife,” this wee knife was approximately 8″ long from the tip of the blade to the top of the hilt. The blade itself was (and is) about 3-1/2″ long. It was carried in a variety of places depending upon where you were. In the early years (14th – the 17th and mid 18th century) it was carried under the armpit of the highlander, for it was a weapon of last resort. When a highlander was not in battle and in a friend’s castle or home it was worn in the hose or boot in plain sight. This was done to indicate that there was no malice to be done. It is pronounced “skeen doo.”

The Dirk: A weapon of war and was about 18″ from blade tip to the top of the hilt. It had an 11-12 inch blade and was worn centrally located on the waistbelt. When in battle the Dirk was carried behind the Targe or shield. In some cases it also served as an eating utensil.

The Scottish Claymore: Of undetermined length due to the fact that it was made for the person carrying it. It was carried in a sheath that hung in back of the person carrying it. It was a weapon of double use. First it did not have a sharp edge mainly because it was used as a stabbing weapon as well as a club. The weapon was designed so that the blade could be used to knock the legs out from under the horses of the enemy. Then taken by the blade, it was used as a club to disable an enemy that may have been in armor (usually the English).

The Basket Hilt Sword: carried on a waistbelt to one side of the Highlander.

A full set of “Highland” accoutrements was essential for the fashion-conscious patriotic Scottish laird of the first half of the nineteenth century. They generally consisted of a basket-hilted sword and dirk with gilt metal decorative mounts, an elaborate horse hair sporran with a gilt metal cantle; black leather waist and sword belts with gilt metal heraldic mounts; a powder horn; a cartridge case; and a steel flintlock pistol. All these items and more had their origins in the weapons and jewelry of the seventeenth and eighteenth-century Highlanders, but by the nineteenth century they had been imbued with the Romanticism of the period.

Anthony and his wife Charlene run a web site called Highland Moon, for those interested in Scotland, past and present.