Amanda Bouchet’s A PROMISE OF FIRE – a Roundtable Discussion 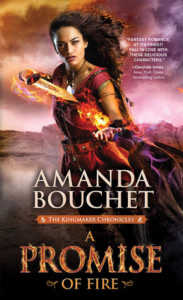 AAR staffers Melanie, Shannon and Mary recently read Amanda Bouchet’s A Promise of Fire. They share their thoughts on what they’ve agree is a very strong début novel.

Catalia “Cat” Fisa lives disguised as a soothsayer in a traveling circus. She is perfectly content avoiding the danger and destiny the Gods-and her homicidal mother-have saddled her with. That is, until Griffin, an ambitious warlord from the magic-deprived south, fixes her with his steely gaze and upsets her illusion of safety forever.

Griffin knows Cat is the Kingmaker, the woman who divines the truth through lies. He wants her as a powerful weapon for his newly conquered realm-until he realizes he wants her for much more than her magic. Cat fights him at every turn, but Griffin’s fairness, loyalty, and smoldering advances make him increasingly hard to resist and leave her wondering if life really does have to be short, and lived alone.

What did you think of the book overall?   Is it a keeper?

Melanie:  This is definitely a keeper, and a book I’ll re-read! I enjoyed most aspects of the story as a whole, and absolutely loved the world and magic/mythology the author put together. (You can read Melanie’s full review HERE.)

Shannon:  It’s definitely a keeper for me. I loved the world and the characters. There were a few small things that irked me, but nothing that will keep me from reading book two.  I’m giving it a B+

Mary:  It is definitely a keeper for me as well, and I’d give it an A-.

We see the story of Cat and Griffin from Cat’s point of view.  Do you think the first person narrative works in this instance or would you have liked to have seen/heard more from Griffin’s point of view?

Shannon: I would have loved to see things from Griffin’s point of view as it would have given the story a more balanced feel. Also, it might have helped me to understand his motivations, especially toward the beginning of the book.

Melanie:  I think keeping things focused on Cat, at least for book one in the series, really kept the story moving and on point. Even though we didn’t spend any time in Griffin’s mind, I didn’t have any trouble figuring out his side of things – I thought the author did a really nice job of “show-don’t-tell” with his character.

Mary:  While I always want to see into everyone’s head, I was fine with the story being told from Cat’s perspective.  The author writes well enough to show us what Griffin’s thought processes were without actually having to be in his head, but it took a while to get there.

A Promise of Fire is, for the first half of the book, a road-trip romance.  How effective is this trope in introducing a new audience to the world Amanda Bouchet has created?  Did it work for you?

Shannon:  I loved the world-building in this novel. I felt Cat and Griffin’s time on the road gave the reader lots of opportunities to learn about the world without having a huge amount of information dumped on us. We learned through Cat’s experiences, and I loved it.

Mary:  I agree, Shannon.  The road-trip romance was a very useful tool to introduce this world.

Melanie:  I absolutely love road-trip stories! It was a great way to get a better glimpse into this world, and by basically being trapped with the same group of people, you get a really strong sense of their personalities.

Specifically looking at the world, though, not only do we get a better idea of things like distance and countries and the lay of the land, we also get a lot of culture – we are right up next to it all. It’s the difference between grabbing your best friend and shoving her in the car, knowing the destination but that’s about it, or just hopping on an over-crowded plane, hoping the weather doesn’t delay you too badly.

Can you tell I hate to fly?

Cat and Griffin are pretty evenly matched as a romantic couple.  Her magical abilities seem to make up any deficit that Griffin’s physical prowess might have in a power struggle between the two.  Though the book has a historical/medieval feel to it, it is a fantasy.  In a truly historical novel, equality between the sexes sometimes comes across as lacking credulity or inflicting 21st century values on a time in the past.  Are you more willing to buy into an egalitarian relationship when that historical tale is rooted in fantasy?

Shannon:  Cat and Griffin were definitely evenly matched, and I, for one, really enjoyed that element of the story. It was especially refreshing, given the historical feel of this book. Luckily, it is a fantasy, which made it easier for the author to create a hero and heroine who are truly equals. In a fantasy world, we aren’t bound by our own history so characters can act in ways that might not fit with what we know of our own history.

Melanie:  You’ve already covered a couple of points I wanted to ask as well, but to add one – what do you think of how Cat and Griffin’s relationship began? Does the end (their happily-ever-after, or at least happily-for-now) justify the actual kidnapping, tying up, and forcing Cat to come with him?

Mary:  Oh I think so.  Initially, Griffin sees Cat mainly as a tool to help his sister maintain control of the kingdom and with their magical deficit he would be remiss if he did not seek to give their people every advantage to stay alive.  Because that is what is at stake – their lives and the lives of all their people.  I believe Griffin is honorable, but in his position as warlord, he has to look at the big picture/greater good kind of thing.  The pull between duty and love is what makes this such a great story.

Shannon:  That’s a great point, Melanie. I feel like Cat came to terms with Griffin’s rough treatment of her. Personally, I wouldn’t be able to love someone who treated me like that, but Ms. Bouchet made it believable.

Let’s talk about Cat’s mother!!!  Do you see her as a caricature or fully developed character?

Shannon:  The character of Cat’s mother bugged me, and not just because she was evil. I wanted a better understanding of what made her that way. Why did she kill so many people? Why did she hate Cat so much? I felt like Ms. Bouchet gave us some of those answers, but not in a way I could fully buy into.

Mary:  Those are exactly my thoughts, Shannon.  I felt Andromeda’s character was among the weakest in the book, even though she has little screen time.  Perhaps she will become more nuanced as the series progresses, but I felt she was too much of a caricature.  Even the most evil people throughout history seem to have some type of humanity toward someone.

Ms. Bouchet definitely has a winner on her hands with her inaugural story in the Kingmaker Chronicles and enough secondary characters to keep this series moving forward for quite some time.  Fantasy romance fans need to put this series on their wish list.

I am from Alabama where I live with my husband of over 30 years in our now empty nest. Our three adult children have flown the coop and my husband and I are getting ready to build that retirement house in the next few years when I hope to have even more time for reading. I am a lifelong reader and while I read primarily romance, I enjoy most genres. If an author can tell a good story, I will read it.