An Interview and a #Giveaway from Kate Stewart

Kate Stewart’s latest, Anything But Minor, is a DIK from us. It’s a witty book and we thought it would be fun to ask Kate some questions. She agreed AND is throwing in an ebook of Anything But Minor to one lucky reader. (Make a comment below to be entered in this drawing.)

Dabney: You sure do love Charleston. Are you a native? If not, when and why did you fall in love with South Carolina’s fairest city?

Kate: I’m actually a native of Dallas, Texas which turned me into a sucker for scenery. Dallas is home, I love it, but the landscaping is a bit dull. Charleston grabbed my heart from the minute I landed on Folly beach in 2010 after living in upstate SC for years. I was so enamored, I simply made the decision, looked over at my husband and said “we’re moving.” We moved three weeks later. I always describe Charleston as a feeling. It can hit anyone just the right way on for any number of reasons. The food, the culture, the landscaping, the history. For me it was the cotton candy sunsets over the marsh, the ever growing cluster of sailboats in the harbor, and the lantern lit cobblestone streets. On a cool fall day, a walk around the downtown streets can give you loads of that swoony feeling. Sigh, yeah, it’s definitely home.

Dabney: Your hero Rafe is a minor league baseball pitcher. I lived in Durham for years and was there when Bull Durham was filmed. I think I’ve seen that movie ten times. You clearly know it well too. What’s your favorite scene? Your favorite line?

Kate: I’m jealous you were there! I actually re-watched the movie while writing ABM and fell in love with it all over again.

Favorite scene is cliche for those who love the movie. Cereal! Need I say more?

Line is also a no brainier.

“Well, I believe in the soul… the cock…the pussy… the small of a woman’s back… the hangin’ curveball… high fiber… good scotch… that the novels of Susan Sontag are self-indulgent overrated crap… I believe Lee Harvey Oswald acted alone. I believe there ought to be a Constitutional amendment outlawing Astroturf and the designated hitter. I believe in the sweet spot, soft core pornography, opening your presents Christmas morning rather than Christmas Eve, and I believe in long, slow, deep, soft, wet kisses that last three days. Goodnight.”

Dabney: Alice is obsessed with Googling. Are you too? What’s the most interesting thing you’ve Googled today?

Kate: That’s funny you asked that. Today I’ve actually not googled a thing but last night I was suddenly interested in knowing everything about Santorini. I saw a picture on my newsfeed and became obsessed. I am a confessed Google addict. How can you not be with so much info at your fingertips? I’m fascinated with travel and have a bucket list a mile long. I also Google actors I respect during or after a movie to see what they are about.

Dabney: Alice is a pilot who is currently working as a flight instructor. Like everyone, I think of Kelly McGinnis in Top Gun when I think about flight instructors. Why did you choose that profession for your heroine?

Kate: Well I wanted to paint a real picture of Charleston and I knew the best way to do it would to bring someone in who had never experienced the city. I thought of Boeing and used it as the perfect reason. I also wanted her to shine as an experienced pilot in a field that was male dominated. Alice is a bit socially awkward to say the least, but by no means, is she stupid. She’s brave, bold, smart and not afraid to take chances. Now that I think about it, it’s pretty ironic that the book is based on her spreading her wings. It’s the second time I’ve put a pilot in my books, I may have a thing for aviation.

Dabney: You’re an entirely self-pubbed author. What was your path to publishing? What do you love about self-pubbing?

Kate: My mom died. I know that’s not the greatest or upbeat answer but it’s the truth. I’d been telling people for years I wanted to write but had no idea how to start. When she passed, I kind of went a little creatively crazy to keep my mind off of it. I wrote Titan, (currently unpublished) and Room 212 as therapy. I had no knowledge of the book world. While writing Titan, someone must of tipped me off or I must have googled self publish and up came Amazon’s page and just…did it. Room 212 went amazon top 100 and I had no idea what that meant. I was so green, and looking back, I’m so glad I was. My favorite thing about self publish would have to be the freedom to use whatever voice speaks the loudest and tell the story the way you feel it should be told. Definitely the freedom, but just as much, the friendships that I’ve made.

Dabney: Your book makes me think you love the movies. What’s your favorite scary movie? Favorite romantic film? Best ever?

Kate: Movies, books and music are my life. It’s my dream to write a book and make a movie the caliber of Steel Magnolias or Forrest Gump. It’s a dream so I’m doing it big. Scary movies I can’t do anymore but The Exorcist still scares the hell out of me. My favorite romance is way too much to ask, I have several, like I can’t do this!

Dabney: Who would play you in a movie about your life? Why?

Kate: Wow. I don’t think my life is movie worthy but if I had to pick someone to play Laura for Room 212 which is loosely based on my twenties, I would probably want a no name with a ton of potential. That book is where I started and I’d want to do the same for someone else.

Dabney: I love that you made a playlist for the book on Spotify. Do you do this for all your book?

Dabney: What’s next for you? Please tell me you’re writing the story of Andy, Rafe’s best friend…..

Kate: I am writing Major Love right now. This is Andy’s story and it will be published sometime in November. This is another stand alone. This one will be a bit different but I’m just as excited to get the story out.

Thanks so much,
XO
Kate 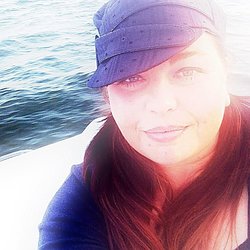 A native of Dallas, Kate Stewart now resides in beautiful Charleston, S.C. She lives with her husband of 10 years, Nick, and her naughty beagle, Sadie.

Kate moved to Charleston three weeks after her first visit, dropping her career of 8 years, and declaring the city her creative muse. Since the move in 2010, Kate has written and published seven novels including Room 212, Never Me, Loving the White Liar, The Reluctant Romantics Series, and Anything but Minor.

Kate writes messy, sexy, angst filled romance books with ‘hard to get’ happy endings because it’s what she loves as a reader. She has a scary addiction to chocolate milk and a deep love for rap music specifically the genius known as Marshall Mathers.

This will be a new-to-me author but I enjoy sports romance :)

This sounds like a fun, interesting book with quite the note worthy cover.

I am a fan of sports romances. Would love to try this.

I love the story about how you decided to move to Charleston! I can see myself doing something similar.

Kate, we need to get together

This book sounds great! Thanks for putting it on my radar.