Adam and Dina, the hero and heroine of Learning to Love, were not my typical characters, and presented challenges when I was writing them. Don’t get me wrong, I loved developing them, but they weren’t “easy” romance characters.

Adam Mandel appeared briefly in the two previous books of this series*–as a previous, brief love interest of the heroine’s in Addicted to Love, and as the best friend of the hero in Five Minutes to Love. In both stories, he was a player, a love ‘em and leave ‘em kind of guy. He wasn’t a terrible person, he just wasn’t interested in commitment. And professionally, his life was pretty easy as well. His father is the head of his own law firm, and Adam was guaranteed a spot there right out of law school. This guy’s life appeared made. Except, it wasn’t, and giving him his own story allowed me to delve deeper into what made him the way he was. In essence, it gave me a chance to redeem him. I showed how his mother’s abandonment affected both him and his father, as well as their relationship. I showed how hard he had to work to overcome misunderstandings because he was his father’s son. And I showed that he was much deeper than the “Mr. Flashypants” persona he portrayed, so that Dina could fall in love with him. In fact, it was Dina’s ability to see through his façade that not only scared Adam, but gave him the strength to ultimately drop that façade and show her his true self.

As for Dina Jacobs, I’ve never written a character quite like her. She’s a genius—for real—and therefore never fit in with people her own age. Her figure is curvier than socially accepted (or so she thinks), her hair is frizzy and when she’s nervous, random facts pop out of her mouth. And she’s nervous a lot. She’s most comfortable buried in a book and likes nothing better than to take a stack of books home from the library, where she works, and speed read her way through them on the weekends. She has a couple close friends, but she’s a solitary creature. She isn’t unhappy, but her comfort zone is fairly limited. When she first meets Adam, she’s not impressed. He’s not her type, and she knows she’s not his either. But the more she sees him, the more she sees inside him, and realizes that by judging him so superficially, she’s committing the same mistakes she hates about other people. And through his acceptance of her, she learns to be comfortable with herself.

Creating such different characters than those I’m used to creating was an eye-opening experience. It forced me to dig deep to create well-rounded people. Figuring out what trivia to use was fun and by the end of the book, I’d fallen in love with both Dina and Adam. I hope you do, too.

Jennifer is giving away an ebook of Addicted to Love to two lucky readers. Make a comment below to be entered in this drawing. 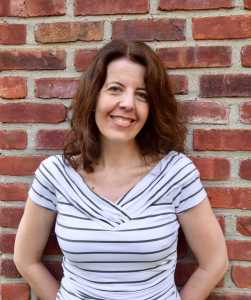 Jennifer started telling herself stories as a little girl when she couldn’t fall asleep at night. Pretty soon, her head was filled with these stories and the characters that populated them. Even as an adult, she thinks about the characters and stories at night before she falls asleep or walking the dog. Eventually, she started writing them down. Her favorite stories to write are those with smart, sassy, independent heroines; handsome, strong and slightly vulnerable heroes; and her stories always end with happily ever after.

In the real world, she’s the mother of two amazing daughters and wife of one of the smartest men she knows. When she’s not writing, she loves to laugh with her family and friends, is a pro at finding whatever her kids lost in plain sight, and spends way too much time closing doors that should never have been left open in the first place. She believes humor is the only way to get through the day and does not believe in sharing her chocolate.

She writes contemporary romance, some of which are mainstream and some of which involve Jewish characters. She’s published with The Wild Rose Press and all her books are available through Amazon and Barnes & Noble.

I am happy that one book by Jennifer Wilck is on Kindle Unlimited so I can check her out before spending money, Thanks for that, Jennifer!

oh and sorry, I did not say the main thing: I like the way you describe those two characters, and that is why I am happy to check out a book – it sounds like I might really like what you write!

your heroine sounds awesome, I love reading about smart women

I too like the idea of a genius heroine. It takes a more “grown up “ hero to appreciate her!

And requires Mr. Flashypants to mature. :)

I love the idea of a “genius” heroine and look forward to reading this.

She was so much fun to write! Hope you enjoy it.

Your book Learning to Love is perfect for this time of year–Romance and winter. A perfect combination!

Your new book sounds like a perfect read, especially for this time of year. Romance and winter–what a relaxing combination!

Your new book sounds like a perfect read, especially for this time of year. Romance and winter–what a relaxing combination!

Yes, it’s the perfect book to escape for a little while!

Learning to Love sounds like my cup of tea. I would be glad to read this book

Oh great, Susan. I hope you enjoy it!

Enjoyed learning more about your story and characters, Jennifer! As always, wishing you all the best!

Learning more about your characters was great, Jennifer. I’m so looking forward to reading the book. Happy Release Day!

Learning to Love sounds right up my alley! I haven’t read any of this author’s books, would love to give them a try!

I’d love you to try them! They can be read in any order–funny, emotional and satisfying.