Hi! I’m Avon Gale, and I’m here today to talk a little about queer representation in sports romance. As a queer person, and a writer of sports romance, this is obviously a subject near and dear to my heart. My series, Scoring Chances, is set amidst the lives of queer minor league hockey players and coaches in the southern United States. While the ECHL is a professional hockey league, it’s a completely different world from the majors and it brings its own set of challenges for my characters – everything from a hectic schedule, sub-par facilities and (because it’s the south) low-attendance that constantly threatens the security of a team.

Of course I want my characters to have their HEA with their love interest (even if I have to put them through the wringer to get there!) But I need to make sure my characters – who are playing in the lowest level league of professional hockey because they love the game so much – have an HEA with their sport, too. The life of a professional athlete is incredibly grueling, and many of these people have been doing little else since childhood. It’s a vital part of their being, and so to really believe in their happy ending, I want it to be with hockey along with their love interest.

I want to write about relationships – between my MCs, between friends and between teammates. And queer people have the same issues and insecurities that make relationships with other people a challenge, regardless of sexual identity. It’s my job, and my privilege, to explore those in my stories.

For this reason, while writing the Scoring Chances series, I made a very conscious choice to keep the central conflict from always revolving around homophobia and how my characters are affected by it/react to it.  One of the reasons why this was so important is that, if you are only focusing on how the characters face and deal with homophobia, you are essentially reframing the narrative into a much more narrow focus – and taking away the powerful and important relationships that are built between people who are supportive and encouraging.

Does this mean everyone on, say, the Jacksonville Sea Storm are supportive of their gay captain and his relationship with a player on a rival team? No, it doesn’t. There’s a line in the first book of the series, Breakaway, right after the MC, Lane, comes out to his team and is elected captain. “Not everyone went with them to Cruisers for a drink, but enough that Lane knew it was going to be all right.”

There probably are teammates of Lane’s who aren’t happy with their captain being gay, for whatever reason. Maybe even a few members of the coaching staff, or a trainer, or someone in the marketing department. But they don’t get a lot of attention, because this isn’t their story. It’s Lane’s. And the family Lane’s found – his best friend, teammates who are supportive, and his boyfriend Jared – are the characters who matter most, both to Lane and the book’s narrative as a whole.

Readers have occasionally expressed surprise that there’s so much acceptance in my books regarding queer athletes. If we’re thinking this about queer books, we need to ask ourselves…why? Why do we notice and remark upon when people are treated well, instead of badly? Expanding the narrative to include a wider range of queer experiences, especially in situations in which there might be a prevalence of homophobia, is a gentle reminder that queer people’s lives do not always revolve around the conceptions others have of their sexual identity.

I’m writing the happily ever after I want to see in the world. This is what I want: queer people to have their dream job, their friends, their families (both by blood and by choice) and their relationships. I want them to have these things in a supportive and accepting environment that nurtures instead of poisons, that builds up instead of tears down. I want my characters to find true happiness – with their soulmate, their teammates, and everyone in between.

Avon’s most recent book is Coach’s Challenge. Here’s the blurb:

It’s been decades since blackmail forced Troy Callahan to retire from playing professional hockey, and he’s built a successful career behind the bench. When he’s offered the opportunity to coach the Asheville Ravens—the most hated team in the ECHL—he’s convinced that his no-nonsense attitude is just what the team needs to put their focus back on hockey. But Troy is disheartened when he finds that the Ravens have signed Shane North, a player known for his aggression. And it only gets worse when Shane’s rough good looks give Troy inappropriate thoughts about a member of his team, even if Shane’s set to retire at the end of the season.

Shane’s career in the majors never quite took off. Wanting to quit on his own terms, Shane agrees to a one-year contract with the Ravens and finds himself playing for a coach who thinks he’s an aging goon and with a team that doesn’t trust him, the coach, or each other. Despite his determination to not get involved, Shane unwillingly becomes part of the team… and is just as unwillingly drawn to the gruff out-and-proud coach. As the Ravens struggle to build a new identity, Shane and Troy succumb to the passion that might cost them everything. 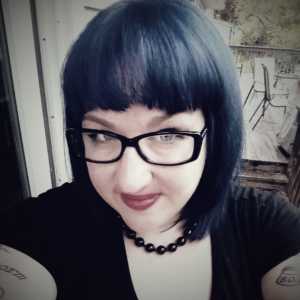 Avon Gale wrote her first story at the age of seven, about a “Space Hat” hanging on a rack and waiting for that special person to come along and purchase it — even if it was a bit weirder than the other, more normal hats. Like all of Avon’s characters, the space hat did get its happily ever after — though she’s pretty sure it was with a unicorn. She likes to think her vocabulary has improved since then, but the theme of quirky people waiting for their perfect match is still one of her favorites.

Avon grew up in the southern United States, and now lives with her very patient husband in a liberal midwestern college town. When she’s not writing, she’s either doing some kind of craft project that makes a huge mess, reading, watching horror movies, listening to music or yelling at her favorite hockey team to get it together, already. Avon is always up for a road trip, adores Kentucky bourbon, thinks nothing is as stress relieving as a good rock concert and will never say no to candy.

At one point, Avon was the mayor of both Jazzercise and Lollicup on Foursquare. This tells you basically all you need to know about her as a person.

I’ve read lots of hockey romances, adore them, and have never seen a game. I have found you need to know very little or nothing about a sport in order to enjoy romances written in that universe. The books typically focus of the people playing the sport, and the intricacies of rules, positions, plays, etc., are generally not that crucial to the plot.

Like the author, I want romance to represent people of all genders, orientations, ages, and races. The more we see every variety of person falling in love the more human we all become to one another!

Great post Avon! I’m new to your series but will definitely be picking up your backlist, as I enjoyed Scoring Chances very much.

aw i’m so glad to hear that! and thank you, I was really excited to write this post! it’s definitely something that’s on my mind a lot <3

I’m thrilled to see a blog post from you for AAR, and I thank you from the bottom of my queer heart!

I must admit I don’t read sports fiction, queer or not. Partly because I have noticed they are all set around American sport of which I know nothing. The leagues and collegiate system confuse me too much. Have you ever thought of writing about Tennis, or Ice Skating? I definitely would read those!

I think my other query would be why always m/m? There are so many nuances to identity and sexual attraction it would be nice to see the others in the rainbow represented a little more.

Thank you! I was so pleased to be able to do that :D

That being said, I do have an f/f series about pole fitness (which is a thing I myself do and am in love with!!) percolating. I’m happy that the hockey series has allowed me to write gay, bisexual and ace characters and I’m looking forward to exploring the same with some ladies in the pole series (and I’d really love to write a book about lady hockey players, too!)

I apologise, Avon, I’m so pleased you have written bisexual and Ace stories and pole fitness – well I can imagine that being very interesting regardless of the pairing :)

I love figure skating to bits, and have followed it closely my whole life. However, if it was about male skaters… I think that would be really difficult to write, as there are already so many bizarre stereotypes about male skaters (and ballet dancers etc.).

What I’d actually love to see is a M/M book about male dancers, where the men aren’t everyone’s idea of “male ballet dancers”. The gay men I’ve worked with in major ballet companies are often those who kill all stereotypes.

It is true most sport romances are about baseball or ice hockey or American football. If they focus as much on the characters as the sport (as these aren’t common sports in most countries), I enjoy them.

I’d also really love to write about college basketball, which is another favorite sport of mine. Hockey is my love, though, and I can honestly not care this much about anything else because I don’t think I’d survive, LOL! Sports fandom is intense!!

I will read ANYTHING about ballet. ANYTHING! I grew up in an intensive ballet training course, and worked in the industry for about twenty years.

The backstage ballet world is crazy, but there are so many possibilities, especially with a touring company who live in this closed little capsule world where they all date and marry each other. :)

Me too! Have you seen the documentary First Position? I showed it to my 7/8th grade PE classes on a rainy day & got books from the boys when it started. And then no one wanted to miss the ending.

They were completely mesmerized by it. Joan Sebastian Zamora is an excellent representation of the incredible devotion/beauty/masculinity of a male dancer.

Me too! Have you seen the documentary First Position? I showed it to my 7/8th grade PE classes on a rainy day & got books from the boys when it started. And then no one wanted to miss the ending.

They were completely mesmerized by it. Joan Sebastian Zamora is an excellent representation of the incredible devotion/beauty/masculinity of a male dancer.