Last week we showcased our favorite contemporary picks; this week, it’s the historicals (and our two lucky winners…in other words, books that received more than one vote).

Top Pick: Seduce Me at Sunrise by Lisa Kleypas

“I’ll have to go with the first book I read in 2008 and still nothing has held a candle to it: The Winter Rose by Jennifer Donnelly.  Not a straight romance, but it’s everything I hope for when I sit down to read a good, meaty book.

Private Arrangements, though, comes in a very close second. The laughter, the tears, the flat out intelligent writing made for a fantastic and surprising read.”

Top Pick: A Fatal Waltz by Tasha Alexander
Runners Up: Wicked is the Night by Catherine Mulvany and The One that I Want by Nancy Warren

“My favorite of the year is Tasha Alexander’s A Fatal Waltz. It’s the third book in the series, and my favorite so far. I really enjoyed the setting in Vienna, and also appreciated that we began to see some interesting aspects of not only Emily and Robert, but of some of the secondary characters in the series. Plus, the romance between Emily and Colin made some very nice progress. Next to this, my favorites would have to be Catherine Mulvany’s Wicked is the Night and Nancy Warren’s The One I Want.”

Top Pick: The Perils of Pleasure by Julie Anne Long
Runners Up: Not without Her Family by Beth Andrew and Broken Wing by Judith James

“My favorite this year was The Perils of Pleasure by Julie Anne Long.  It’s fast-paced, with an unusual plot and settings, an entirely delectable hero and a heroine who has a clue. Very funny and gripping at the same time. My runner-up is Not Without Her Family by debut author Beth Andrews. The characters are well-rounded (unusually so for a series romance) and everything was just right, making it highly
enjoyable to read.

[Note: In between this week and last, Rike read Broken Wing, which is enjoying a huge buzz right now. She made a great case for inserting it as a runner up at the last minute.]

“I didn’t love Broken Wing quite as much as The Perils of Pleasure, but it came thisclose. The writing is just fabulous, and I am amazed how Judith James manages to capture a wholly different picture of the
period. I loved the adventure story bits, and the relationship between Sarah and Gabriel, and the way sex and romantic love are treated.” 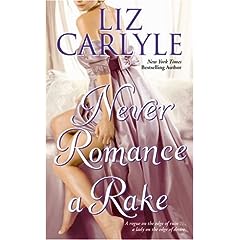 Top Pick: Never Romance a Rake by Liz Carlyle
Runners Up: Some Like It Wicked by Teresa Medeiros and When Twilight Burns by Colleen Gleason

“In 2008 I only read a couple of books that weren’t for review, but luckily some of those were really good. Liz Carlyle’s Never Romance a Rake would probably win the race of best romance, though it’s not necessarily one I’d curl up with over and over. It was a leisurely-paced, meaningful story with some of the best relationship development I’ve read in a while. A close second is Some Like it Wicked by Teresa Medeiros, which was fun, light-hearted, and filled with characters that I truly enjoyed. But following closely on the heels of these historicals is When Twilight Burns by Colleen Gleason. I just love a good vampire novel and her Gardella series is one of my favorites.”

Top Pick: Untamed by Pamela Clare
Runners Up: Your Scandalous Ways by Loretta Chase and Like No Other Lover by Julia Anne Long

“This has really been a tough decision for me to make this year. However, I think my favorite book published this year would have to be Pamela Clare’s Untamed because I enjoyed the chemistry between the h/h. I also appreciated the struggle both had to stay honorable and in touch with their beliefs.

Top Pick: Private Arrangements by Sherry Thomas
Runners Up: Hungry for More by Diana Holquist, The Spymaster’s Lady by Joanna Bourne, To Seduce a Sinner by To Taste Temptation by Elizabeth Hoyt, and Seduce Me At Sunrise by Lisa Kleypas

“I discovered Diana Holquist this year and greatly enjoyed Hungry for More.  Still, with the exception of a few contemporary and romantic suspense high points, for me 2008 was all about historical romance. I loved Joanna Bourne’s The Spymaster’s Lady. And Elizabeth Hoyt continued to blow me away with To Seduce a Sinner and To Taste Temptation. Lisa Kleypas’ Seduce Me at Sunrise was also a big favorite of mine.

“But the high point of the year for me was the debut of a new voice in historical romance I very much hope to be reading for years to come. In Private Arrangements, Sherry Thomas displayed an assurance and talent equal to some of romance’s all time greats. It was definitely my book of the year ­ and then some.”

Just One of the Guys by Kristan Higgins was the favorite of both Rachel and Abi:

Top Pick: Just One of the Guys by Kristan Higgins

Top Pick: Just One of the Guys by Kristan Higgins
Runner Up: Curse of the Spellmans by Lisa Lutz

“I’d have to vote for Just One of the Guys by Kristan Higgins. My extended thoughts are here, but basically, I laughed my butt off and got pretty close to crying several times. The earth moved. 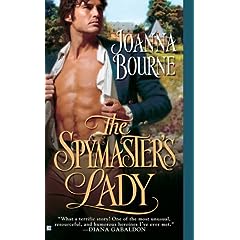 Our Winner for the year got three top nods: mine, Cheryl’s, and Lynn’s. As you may have guessed, it’s The Spymaster’s Lady

“My vote goes to Joanna Bourne’s The Spymaster’s Lady – it blew me away like no other book did last year. Bourne has an entirely unique and fresh voice, her characters are complex, the plot riveting and historically fascinating – just a flat out great book.”

Top Pick: The Spymaster’s Lady by Joanna Bourne
Runners Up: When Twilight Burns by Colleen Gleason and Home Another Way by Christa Parrish

“My favorite book of the year was The Spymaster’s Lady by Joanna Bourne. I really liked both main characters, and I loved seeing how the author used the actual history of the time to create real tension. The love story had depth to it, and I greatly appreciated that.

1) When Twilight Burns (Colleen Gleason) – I have LOVED the Gardella series, and this one really stood out for me. I saw it in Borders when it came out, and had to sit down for a bit to devour the entire thing before I could finally make myself go up and pay for the book.

2) Home Another Way (Christa Parrish) – This is more women’s fiction than romance. The story here is touching, and I just found Sarah Graham to be a fascinating character. On the surface, she has so many
unlovable traits, but there is just some spark of potential at her core that draws one in nevertheless.”

Top Pick: The Spymaster’s Lady by Joanna Bourne
Runner Up: A Most Unconventional Match by Julia Justiss

“I read The Spymaster’s Lady fairly early in the year, and nothing else I read quite equaled it. The plot and characters were entirely unique, and very memorable. Sometimes it seems like nothing is really fresh or different anymore, so it’s all the more notable when something comes along that really breaks the mold.

“A Most Unconventional Match is also deserving of mention. Year after year, Julia Justiss quietly turns out some of the best books around. This one had an unforgettable hero and a very sweet romance.”

A few final thoughts: Over all, 2008 was a strong year for historicals. Ten of us chose an historical as our top pick, and there are some that figure prominently as runners-up (Private Arrangements comes to mind). And did you notice that Lisa Kleypas was chosen for both a contemporary and an historical? Hopefully the wide variety of choices will inspire you as you complete AAR’s annual poll, which runs through February 17.  As always, we’re eager to hear what you thoughts about our top picks (and yours).

I was excited to see The Spymasters Lady as the top romance of the year. It was my favorite book also. Bourne does bring a fresh voice and good characters and the plot was loaded with tension.

What a thrill! How exciting to see UNTAMED on this list. My thanks to everyone at AAR for all you do to support romantic fiction and romance readers and to Heather for seeing merit in Morgan and Amalie’s story.

I was delighted to see MY favorite historical, Joanna Bourne’s SPYMASTER’S LADY (I loved MY LORD AND SPYMASTER too) make it as one of the reviewer’s favorite books of the year. Then I was beyond thrilled to have Blythe choose my UNCONVENTIONAL MATCH as a runner up. To be mentioned in the same company as Joanna, Julie Ann Long, Lisa Kleypas, Connie Brockway, Loretta Chase–that’s every historical writer’s dream!

Thanks too for highlighting some books I missed, which will go on the TBR list immediately.

Lastly, a special heart-felt thanks to everyone at AAR for all they do to give romance readers (and writers) a thoughtful, fun place on the web to talk about our favorite thing–reading and discussing romance.

I read Nancy Warren’s The One That I Want during the summer because of the review here on AAR and I really liked it. It had some flaws, but it was nice and different.

To be honest, I haven’t voted in the Annual Poll in a few years because I’m not up to speed with current releases. I always feel like I only have one or two books to contribute that were current and sometimes they really weren’t great books. I think I’d be able to vote if I read more historical, but I’m just not into it all that much. :?

I really loved “”The Perils of Pleasure”” and “”Untamed”” and I’m glad to see both of those books get a nod from the staff. I love a heroine with a past and PoP in particular has a great one.

I had never even read any book by Julie Ann Long before and both of her books published in 2008 were very good (“”Like No Other Lover”” being the other one besides PoP).

Wow! Thank you so much, Rike, for choosing NWHF for an honorable mention! What an honor *g*

I can’t believe I haven’t read any of the other books picked. I’m going to have to remedy that right away! If only reading didn’t interfere with writing time :-)

I’ve made note of all the titles listed above and will be adding them all to my growing Amazon wish list!