When I broke out in a sweat during the first chapter of the newest installment of Toni Anderson’s  Negotiators series, Cold As Ice, I knew it was going to be a terrific romantic suspense novel. Present are all the hallmarks of Anderson’s nail-biters: fast-paced plot, engaging story, robust characters, sexy romance, and plausible crimes. In short, this could happen to you, and that makes this shit real.

We’ve met Darby O’Roarke and FBI Supervisory Special Agent Eban Winters before, in Colder Than Sin, when Darby was kidnapped and brutalized in Indonesia while doing field work. Eban was one of the agents who helped her escape and has been her confidante ever since. She had hoped thing might develop romantically between them, but Eban drew the line at romancing her, even though he, too, wanted more.

Their relationship is complicated, and it doesn’t get any easier in Cold As Ice. Darby’s back in Fairbanks Alaska now, working as a grad student in the Department of Geophysics at the university. Her efforts to get back in the normal flow of life have been successful, for the most part, until she wakes up on the couch of fellow grad student Martin Carstair. She thought the worst part of the day would be the realization that she had no idea of getting to Martin’s, until she discovered his lifeless body, sprawled across his bed with a huge hunting knife sticking out of his chest. Good thing she has a direct line to Eban, whose calming voice is the reassurance her mind needs to get through the experience.

In the meantime, she also calls the Fairbanks PD and draws the short straw with Detective Signy Torgersen, who’s all too happy to consider Darby the one and only suspect. Torgersen is a ball-buster, but you’d imagine she’d have to be to garner the same respect as the other officers in the wilds of Alaska. She’s also sort of judgmental and lazy, because she’s willing to overlook the most important elements of police procedure—fingerprinting everything, checking for footprints, getting toxicology reports on both the victim and the suspect—and falls back on the excuses of assumption and an under-appropriated department. Good thing Eban is there to put her back on track.

Martin’s murder takes center stage throughout the story, proving Anderson’s knowledge of law enforcement and police procedurals, but she tempers it evenly with the building romance between Darby and Eban. Eban is an intelligent and intuitive FBI negotiator, and his demeanor makes him the perfect companion for Darby, who second guesses everything and weighs the consequences of every decision. Together they work through the trauma she experienced in her past and find love on the other side, even though there are dangerous twists and turns around every corner.

Clear your schedule, y’all, because this tension-filled suspense does. not. stop.

Note: Mention is made of the past sexual abuse suffered by one of the characters.

Buy it at Amazon, Audible or your local independent retailer 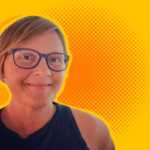 Great review Dolly! I’ve read a couple of Toni’s books and enjoyed them (just can’t do anything with serial killers). I’ve had the pleasure of having lunch with her a few times as well as she lives in my city, she’s a lovely woman. Her husband works in the biology department at our local university.

Although I usually don’t read Romantic Suspense, this is a very tempting review. You grabbed my attention at “broke out in a sweat during the first chapter”. Thank you and a lovely picture of you BTW.

Romantic suspense is my jam, Trish, so I’m happy to tempt you to the dark side.