Rejoice, Wulf fans! In Edge of Power we get his story and an enjoyable and satisfying conclusion to the sexy, futuristic Edge series (at least for now).  The self-professed King of the West gets the comeuppance he so richly deserves – ending the overarching four book plot, while Ms. Crane rewards fans with a delightfully dark and forbidding King of the Raiders. Pairing Wulf up with his enemy’s daughter, Princess Kathlyn, whom Riordan and Eiryn fortuitously met at the end of Edge of Control, is the cherry on top of this entertaining and addictive dystopian thriller.

The Viking world Ms. Crane envisions in The Edge series is dirty, naughty and sexy.  However, Edge of Power is not a good jumping off point if you aren’t familiar with the series and its backstory.  To understand who and what forces are in play I recommend you read (at least) The Edge of Obsession (book one) first. Provocative, compelling and just plain sexy, The Edge books are all compulsively readable.

Because Edge of Power resolves a plotline unveiled in the first book, this review contains spoilers.

Wulf is great book boyfriend material.  An uber-alpha, sexy, smart and confident (not to mention good looking) ruler of the fierce Viking Raiders, Ms. Crane has teased us with glimpses of the enigmatic Raider King throughout the series.  I looked forward to his book more than any of the others, and though he is a fascinating principal, he isn’t given enough action in Edge of Power.  As the story opens, Wulf has survived a stormy and perilous Winter crossing from the Viking territory and arrived alive and alone at King Athenian’s stronghold.  Through Wulf’s PoV we know the brotherhood has a plan in place to defeat the King, and that Wulf’s arrival sets that plot in motion – we just don’t know any details or when/if the rest of the brotherhood will make an appearance.  Once Wulf arrives, instead of killing him on the spot, Athenian opts to toy with his prisoner/guest.  He also lets him keep his blades. Oops.

Once in his cell/guest room, Wulf is surprised by the arrival of one of the kingdom’s courtesans.  Up for a fuck (always) with his mysterious guest, it takes him but a few moments to recognize that though she’s dressed for the part, the courtesan is either new to the trade or terrible at it. When he presses her on her intentions, then kisses and fondles her, she allows it, but it’s obvious she’s never done this before.  Wulf doesn’t relent until she confesses who she is – Princess Kathlyn, Athenian’s virgin daughter.  It’s she who betrayed her father by sharing his plan to invade the Raider stronghold to Eiryn and Riordan in Edge of Control.

Kathlyn knows Wulf’s arrival is linked to the information she passed to his fellow raiders.  She thinks she can handle Wulf, despite the rumors of his fierce and violent nature, because of her own experiences with her sadistic father.  But she severely underestimates both Wulf and her physical response to him when he’s close.  Wulf’s handsome and intimidating presence is startling, but Kathlyn finds herself drawn against her will to the mysterious Raider King.  Wulf tries to make it clear he’s no good for her, but it’s obvious he’s having a hard time convincing himself, let alone Kathlyn. She is overwhelmed by her physical attraction to Wulf, but tries to hide it behind a stoic demeanor.

Kathlyn hates her father, his kingdom and well… pretty much everything about her life.  Beaten and bullied by her father since childhood, Kathlyn yearns to escape the confines of the kingdom and is desperate for control of her future – and her virginity, a commodity to be traded by her father.  Wulf makes it clear he isn’t the answer to her problems or the savior she believes him to be.  (Ahem.) So, after kissing and bringing her to orgasm with his hands, he sends her away, leaving her confused about her feelings and anxious about returning to her quarters unseen.  When she’s spotted by one of her father’s wives, she panics and tries to control the situation.  But as soon as she notices what Kathlyn’s (not) wearing, his vindictive wife doesn’t hesitate to alert the guards.  Though Kathlyn somehow manages to keep her visit to Wulf a secret, the damage to her reputation – and with her father – is done.

Kathlyn’s appearance before King Athenian on his throne, scantily dressed in a courtesan’s clothes, jumpstarts the novel.  Wulf tries to help Kathlyn (he can’t seem to help himself – smirky smile) and just as he hoped and planned, King Athenian decides to link their fates together.  The King agrees to give her virginity to the savage raider King in order to teach her a lesson – and Edge of Power evolves from a simple revenge story into a slow burn love affair.  Despite Kathlyn’s fears, Wulf has no intention of bowing to the wishes of the King and deflowering her in a macabre and painful public spectacle.

Fortunately, guards and locked doors fail to keep Wulf contained, and his late-night explorations lead him right to her.  Raiders love fucking, none of that compliant sex for them, thank you very much, and their king is no different.  Wulf, though he fights hard to deny it, falls hard and fast for his feisty princess.

Throughout the novel, Wulf tries hard to keep away from Kathlyn, while Kathlyn knows she’s fallen for the raider, but sees no hope for their future.  She fully believes her father intends to torture and kill Wulf, and that he’ll succeed.   We spend a lot of time in the heads of our principals as they work through how they feel about each other, and about King Athenian and his maneuverings.  But this book (much like its predecessor, Edge of Control) doesn’t have enough of the dirty and naughty sex we expect from The Edge series.  There’s a tad too much thinking (who knew Wulf was such a broody hero?) and not enough fucking – a trademark of this remarkable series. When the raiders finally arrive and the plot to overthrow King Athenian unfolds, it’s been a long (non-violent) stay for Wulf in the kingdom, and the machinations between him and King Athenian began to grow a bit tiresome and one-note.

The ending – in the kingdom and between Wulf and Kathlyn – doesn’t unfold at all as I expected and frankly, is a bit anticlimactic, but… it works in the context of the story and Wulf’s mindset.  I won’t lie to you, I didn’t love the conclusion.  I was left wanting more Wulf, more Vikings and well… more.  The good news?  Though the King Athenian story arc is resolved, Ms. Crane promises there is more of this entertaining world to come. 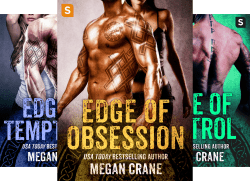 In case you missed it, we have an in-depth interview with Megan about Edge of Power and the world she’s created for the books.

I love romance novels - all kinds.
I love music - some kinds.
I have strong opinions about both and I like to share them.

Great review. Sounds like this series is unlike anything I’ve read before.

Before this I’ve limited my dystopian fiction to YA books. THIS IS NOT YA. I wasn’t sure it was really my cup of tea when I started it – there is a lot of fucking (and that word gets BUSY in these books) and macho men. But once you give in to the rhythm of the the story, let your imagination remove you to the world Ms. Crane imagines, and just enjoy the cray-cray aspect of it – it’s totally addictive. I enjoyed all the books – but my favorite was the second, Edge of Temptation. I know I’m in the minority with that – I just liked the relationship between the leads. Again, it’s ridiculous and you really do have to put the breaks on reality – but I liked it. I hope you give the series a try – I’m so glad I did.

Love the dystopian plot-line. I am interested in learning more about what is left of the rest of the world (outside of former North America). Lots of potential with this series.

Old Wulf may be a great hero, but he looks like he’s harboring an alien in middle of his chest.

From the reviews, this looks like a very entertaining series…….I always enjoy discovering a new author or series.

I’m in the middle of this book right now and really enjoying it! The whole series has been great.

I should add don’t enter me for the giveaway :D

I have heard a lot about this series but have not yet read them! From the reviews it seems everyone loves the first book! I would love to win a chance to read these :)

I agree with much of this review although I felt that the world-building–both of the physical world and the philosophical one–is so fabulous that I missed Wulf less than I might have.