I loved Graceling and its sequels, Fire, Bitterblue, and Winterkeep, and I also love graphic novels, so I was so excited to see that Graceling had scored a graphic adaptation. Well, at least I was excited until I read it. A graphic novel should be more than a literal illustration of a text. Not only is that all we get here, but the illustrations themselves are flat and lifeless, adding up to an unsatisfying reading experience.

I’ll reuse my plot description from my review of the novel, and then talk more about the specifics of the adaptation. Here’s an introduction to the story:

In the Seven Kingdoms, some people are born “Graced,” or in possession of special gifts, which range from the useful (cooking) to the impractical (tree climbing) to the problematic: Katsa is Graced with killing. All Graced people belong to the kings to use as they see fit, and Katsa has been trained as an enforcer by her royal uncle, who forces her to break arms and worse to keep his underlings in line. To borrow a phrase, Katsa is the Brute Squad. While she can’t imagine defying her uncle outright, she blows off steam by using her Grace for secret missions of justice and peace. On one such mission, she rescues an imprisoned noble, and encounters another Graced fighter, a prince named Greening Grandemalion, who understandably goes by the nickname Po. The prisoner was Po’s grandfather. This meeting causes Katsa to start asking questions about her obedience to her uncle, and also why Po’s harmless old grandfather was a prisoner in the first place.

While the text novel is a gripping page turner, the graphic version lacks energy. There are too many text boxes, and they are often also much too large. Lengthy monologues and narration create visual dead space, where momentum goes to die.

The art compounds the problem. The story is primarily shown in separate, sequential panels, creating a choppy visual experience which resembles a storyboard more than a finished, flowing narrative. Katsa’s fight sequences are especially prone to literal, step-by-step depiction. 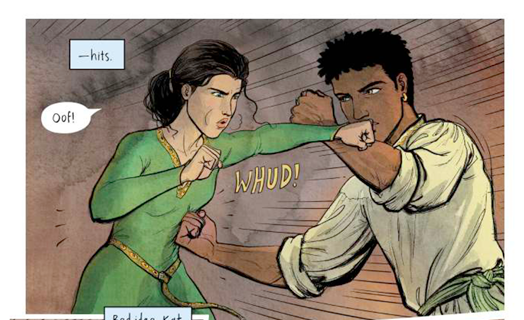 The facial expressions are exaggerated and awkward, cartoonish rather than graphic. If the illustrations were a film, we’d say they were overacting – “This is my FRUSTRATION FACE. See how frustrated I am! My brow, it furrows, and my eyes, they squint! Yes, such frustration!”

I will give the artist credit for absolutely stunning landscapes. Unfortunately, I don’t come to graphic novels for landscapes.

Content in adaptations needs to be reduced to meet graphic novel page restrictions. Add the fact that so much space is wasted on step by step images of Katsa doing a backflip, and you have even less space for worldbuilding. That’s a huge loss, because Graceling is one of those novels that camouflages its plot twists by giving you so many details that it’s impossible to know which one will be relevant later. In the novel, for instance, you hear about all of the Seven Kingdoms and their rulers in balance, so you don’t know who’s behind the grandfather’s kidnapping. In the graphic novel, the way the rulers are described and illustrated and how much time is spent on each makes it rapidly obvious who the villain is.  Additionally:

Show spoiler
the characters experience a magic which distorts reality, which could make for an interesting visual, but it’s shown just as literally as everything else.

Graceling is a terrific book, but this graphic novel is not a worthy adaptation.

Buy it at Amazon or your local independent retailer

It is too bad this version of the novel is so awful since there are readers out there who do not think words on a page could be worth their time and effort – and it would be a shame that anyone comes away thinking this represents the original story. But for those willing to read (or listen) to words, the novel is excellent.

I certainly don’t turn to graphic novels because I don’t think words are worth it. It’s a different form of literacy but equally legitimate, just like listening to an audiobook doesn’t mean that you don’t think reading is worth it. That being said, sometimes a graphic novel is a worthwhile adaptation of a novel (Manga Classics has a terrific track record and I have another DIK from them coming up, for Anne of Green Gables). And sometimes it isn’t. This is an “isn’t.”

Sorry! Didn’t mean to imply that *you* prefer GN to reading words. Or that GN/anime/manga aren’t legitimate forms of story-telling. I’ve read some excellent GNs, and am a fan of the format.

I just feel bad for the people who only read in this format and think this is all there is to the story. The original novel is excellent. That is all I was trying to say.