This review contains spoilers for the first two books in The Folk of Air series.

At the end of The Wicked King, the second book in Black’s marvelous The Folk of the Air series, Cardan, the King of Faerie, banishes Jude to the mortal world decreeing:


“I exile Jude Duarte to the mortal world. Until and unless she is pardoned by the crown, let her not step one foot in Faerie or forfeit her life.”

This does not go over well.

As the final book in the trilogy, The Queen of Nothing, begins Jude is infuriated, embarrassed, and bored. Living in Maine with her sister Vivi and her brother Oak, she spends her days watching brainless TV and her nights doing odd jobs for fairies. She misses Faerieland desperately. She longs to return, to best Cardan, to seize the throne, to somehow get back who she was there, a self she simply isn’t in the mortal world.

Thus when her treacherous twin Taryn arrives at her door requesting that Jude temporarily swap places with her–Taryn has, astonishingly, murdered her utter prick of a husband, Cardan’s childhood friend Locke, and wants Jude, who cannot be glamoured to tell the truth, to pretend to be her during Taryn’s inquest–Jude agrees. And though the plan is that Jude will only go to Faerieland for a day or two, the moment Jude returns to Court, she’s again enmeshed in the fight for the throne, a seat that belongs now not only to Cardan but, unbeknownst to all, to her. 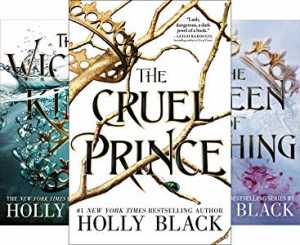 The Folk of Air is exquisite enchantment–gorgeous, absorbing, lavish with magic, love, and conflict. The books build on one another beautifully, each deepening the complex narrative and illuminating the dispositions and motivations of the characters. The principals here, varied and satisfyingly authentic, are among the believable I’ve encountered in fantasy. One of the many joys of The Queen of Nothing is seeing the conclusion of the stories of Madoc (Jude’s adoptive father who wants the throne for his own), Taryn, Vivi, the Ghost, the Bomb, and the Roach (fellow spies from The Court of Shadows where Jude once served) and a legion of others. (I don’t recommend this book as a standalone.)

At its marrow, though, the series is Cardan’s and Jude’s story and I’m hard pressed to think of a pair I’ve liked more. In The Cruel Prince, Cardan and Jude begin as enemies, he a hateful brutal prince whom Jude hates more than anyone else in the Court. Over the next thousand pages, the two form a snarled partnership that, by the series’ end, empowers not only themselves but all of Faerieland. Theirs is love-hate story for the ages and one I suspect I’ll read and recommend again and again.

or Shop your local indie bookstore

Buy Queen of Nothing by Holly Black:

ah, that came in the middle of my favorite scene from the book where they were finally using their words and explaining their actions, or at least Cardan was attempting to. It takes Jude a little longer hence the slap I guess, but it bothered me too. Though sadly it felt very in character for her. Are you familiar with the totally disturbing song, He Hit Me (It Felt Like a Kiss)? Because it popped into my head when I thought about Cardan’s reaction to the slap but maybe even to Balekin’s treatment of him.

It was the only off note for me in the trilogy. I have NO patience for a double standard about violence. BUT, then I began to think about their past and how maybe that was just Jude paying him back. It didn’t feel emblematic of their relationship moving forward so I moved on. Your point about Cardan’s past is well taken.

My HS age niece, sister and I did a group read and we all loved it though there were quite a few things that struck me as distinctly dubious, Maybe one is the scene you mention? It seems the morality of an action in Faerie is never the issue, it’s only whether you are strong or wily enough to get away with it, though the exception for Jude is the treatment of humans by the Fae. I would have liked more of Cardan, he exhibited more character growth than anyone in the series, and I absolutely wish we could have seen some of his letters.

or perhaps you wondered as we all did, quoting my niece “didn’t they ‘do it’ in the last book?”

It involved a slap.

There is one scene in this book that did take me aback. Has anyone else read it?