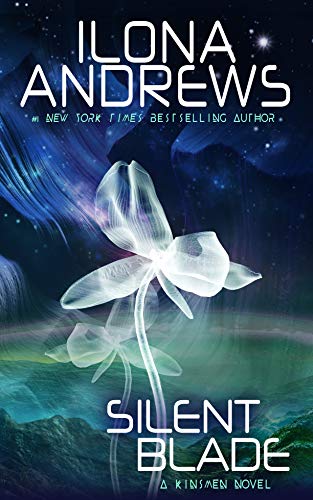 Recently I discovered the Ilona Andrews novella Silver Shark and was thrilled to realize it was tied to an earlier novella, Silent Blade, which I very much enjoyed. Have you read Andrews’ Kinsman novellas? If not you’re missing a real treat. Both short stories are filled with imagery, backstory, and passion enough for any full-length novel.

Upon reaching maturity, Meli Galdes was rejected by the man she had been betrothed to from the age of ten. This rejection destroyed her life, proving to other families that hers was too weak to retaliate against the family of her fiancee, and rendering her unmarriageable, because no one wanted to offend her powerful fiance in case he should change his mind. In Meli’s world of the very far future, where colonization of distant planets required genetically enhanced humans to succeed, strength of family is all. To save her family further embarrassment Meli cut herself off from her kinsmen, as these genetically enhanced families are called. Her only contact with her family was when they needed an assassin, a job for which Meli’s enhancements make her particularly suited. Meli is finally retired from her brutal lifestyle when she receives a call from her brother asking Meli for one more assassination – the man to whom she had been betrothed.

I’ll try not to gush here, but wow, awesome story. Celino Carvanno, the erstwhile fiance, is a tough, mean bastard, super-intelligent and intuitive, cautious and meticulous, all of this rendering him very hard to kill. Watching Meli get the best of him, using, ironically, information she received in order to make him the best wife possible, is intensely satisfying. In the beautiful garden city of New Delphi, Meli seduces Celino with food and conversation, warmth and comfort like he has never known, and Celino falls for Meli – hard. That’s when she takes her revenge. And how sweet it is. Celino is one romance hero that truly gets what’s coming to him.

This story would appeal to a pretty broad audience. If you like your sci-fi with a little somethin-somethin, you’ll be very happy with the world building, including details about technology and finance. That romance fans will enjoy Silent Blade goes without saying. Highly reccommended.

0 Comments
Inline Feedbacks
View all comments
wpDiscuz
You are going to send email to
Move Comment
...