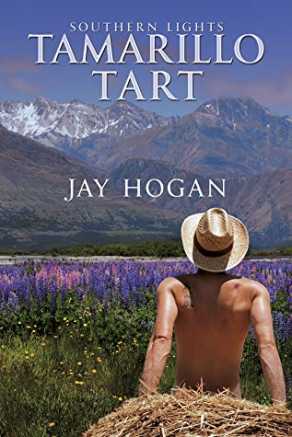 Tamarillo Tart is book two in Jay Hogan’s Southern Lights series of contemporary romances set around Queenstown and the Southern Alps on New Zealand’s South Island.  It’s a well-written opposites-attract romance in which two very different men find an intense mutual attraction developing into something much more, and one of them discovers an inner strength and determination he never knew he had when a short overnight trip turns into the journey from hell.

Stef Hamilton has agreed – on sufferance – to join his best friend Tanner and Tanner’s boyfriend Ethan (Powder and Pavlova) on a short horse-trek into the Southern Alps mostly, he tells Tanner, because he wanted Ethan not to think your best friend was a prissy dork.  Stef is absolutely not the outdoorsy type – he’s a snarky city boy with attitude to spare and a tongue that can wound at fifty paces, the closest he comes to a cowboy is Cowboy Night at his favourite gay bar, and he loves his designer clothes and mortgage-worthy hair products.  He’s also a huge Lord of the Rings fanboy, and Ethan specifically arranged the trip to take in of the locations used in the movies, assuring Stef that his friend, Cass – Cassidy – Martin will be the perfect guide for someone who hasn’t ridden before (well, not on horseback at least!) and is nervous around horses.  Stef isn’t best pleased when Tanner has to cancel at the last minute due to a work emergency, although Stef’s first sight of the six-foot-six, tousle-haired, sex-on-legs tour guide does go some way towards mitigating his annoyance.  Never one to let the grass grow under his feet, Stef wastes no time in getting his flirt on, despite Ethan’s assurance that Cass is straight.

Cass is amused rather than put off by Stef’s humour and matches him quip for quip, not batting an eyelid at his more outrageous pronouncements.  He’d never thought someone like Stef – sleek, styled and sassy – would be his type, but something about him absolutely pushes his buttons and then some.  Cass quickly senses that Stef’s devil-may-care snarky attitude is a tough outer shell, and that starts him wondering what it’s covering up – but he reminds himself just as quickly that it’s none of his business.  It’s a two-day trek and then Stef, and the temptation he presents, will be gone.

Once arrived at the stables with the other two members of their tour, Cass introduces Stef to his mount – Arwen –  and things go pretty well, in spite of the fact that one of the other guys in their small group of four is a homophobic arsehole.  After they set off, Stef is able to overcome his initial fear and nervousness and actually starts enjoying the ride – and the spectacular scenery and the equally spectacular cowboy eye-candy certainly don’t hurt.

The first part of the story focuses on the interactions between Stef and Cass, and on Stef gradually revealing the softer, more reflective side of himself he hides behind his outer fabulousness.  Both men are surprised at the strength of the connection they’re feeling after such a short time and know they’re completely mismatched – Cass can’t think of anyone less suitable for him to be interested in – and yet they each see something in the other that draws them together.  They find themselves talking about things they’ve rarely – if ever – shared with anyone else; a failed relationship a few years earlier that really put a dent in Stef’s self-confidence, the fact that he’s never really felt he fit in, not only in being gay, but also in not being the type most gay guys go for (“I’m what they mean when they say ‘no fems’ on Grindr”) – while Cass talks about his failed marriage, and why he hasn’t come out to his family since his divorce.  I liked Cass’ fierce defence of Stef in the face of Stef’s frequent self-deprecation; Stef is so used to being thought of as someone who is unable to cope with difficult shit that he’s bought into that view of himself, but Cass is able to see through to the real Stef, the one who’s tougher than he looks and thinks he is.  It’s going to take more than a few pep-talks to completely convince Stef of that, even though he does begin to realise that by doing what he’s doing – horse-riding, camping, and all that outdoorsy stuff – he’s already going some way to proving the truth of what Cass says.  When disaster strikes – with Cass injured, a terrible weather front coming in and no way back to base – it’s Stef who steps up and into the breach, taking over and directing the other tour members and coming up with a plan to get them out, terrified all the time that he doesn’t know what he’s doing, but holding it together and doing what he can for Cass while they wait for rescue.

The chemistry between Stef and Cass is smoking and their attraction heats up quickly, but the author also shows that there’s more to whatever is growing between them through their conversations and the confidences they share.  Both men acknowledge the speed at which the connection grows between them and are surprised by it, but the thing I really liked about the way things eventually play out (after a bit of a late-book mis-step on Cass’ part) is that the main story ends on a solid HFN, with both Stef and Cassidy deciding that regardless of the fact they’ve not known each other very long, whatever is between them is something special and they both want to give it a chance.  The HEA is cemented in the epilogue, but I really liked that what could so easily have been insta-love was instead a mutual and mature decision to try to make a relationship work in the long term.

Once again, the author’s descriptions of the spectacular scenery are vivid and have me jonesing to get down there to see it all for myself, and the small secondary cast is well-written especially Cass’ friend (and his father’s girlfriend), Dee, who is clear-sighted and wonderfully supportive.

Snarky, sexy, poignant and sweet, Tamarillo Tart boasts a pair of engaging, three-dimensional leads, plenty of humour, warmth and insight, and a chemistry-laden romance without too much internalised drama and angst (the plot has enough drama to keep things interesting!)  It’s another thoroughly enjoyable read from Jay Hogan, and I’m happy to recommend it.