Second chance romances, while one of my favorite tropes, often require a deft hand. The reason the relationship didn’t work out in the first place has to be handled with care so that audiences are still rooting for the couple. I don’t love stories where someone cheated, for instance, but stories where life happened and that’s what tore them apart? PUT IT IN MY VEINS. Good news for all of us, in The Heiress Hunt, Ms. Shupe shows she has the required deft hand.

Maddie Webster knows she has one job in this world, and that’s to marry well. Not marry for love, not marry a charming prince, but to marry well. She’s assuming that means she will have to abandon her actual true love – tennis – but she does appear resigned to that fact. When we meet her, the goal seems to be in sight. Lockwood, an honest to goodness English Duke is about to propose.

And then the man that broke her heart sails back into her life.

Literally, sails back into her life from Paris.

Now, for Maddie, that heartbreak was one of friendship, but for Harrison? He left because Maddie broke his romantic heart. After several years of self-imposed exile, he’s back in New York and is forced to marry because of Plot Reasons involving his family. Maddie, being the pal that she is, agrees to host a Bachelor-style gathering at her family’s Rhode Island estate and find him a wife. Legit, y’all, all that was missing was Chris Harrison and some roses, the vibe was the same.

Of course, Harrison has less than zero interest in anyone else – he’s there for Maddie.

Drama ensues, an engagement is made and broken, childhood truths are spoken, and everyone lives happily ever after.

I liked this book a great deal, and I love how Shupe writes complicated characters who stand on their own feet. I adored that the epilogue wasn’t a babylogue, but instead about Maddie as a person and her goals. Harrison, however, itched at me. I get that he needed to be ruthless, and I get that he’s a bit of a scoundrel, and that’s supposed to be the appeal – but he was an alpha without being called one and I’m just more into beta/cinnamon roll heroes these days. If you like Growly Fucky Heroes (as one of my good friends refers to them) then Harrison is going to be your jam, friends, but he itched me a little too much for this to be a DIK.

I am so ready for the rest of this series, however. Gilded Age New York should be mined far more than it is for historical romance, and I’m so grateful Shupe has turned her skilled pen to that era.

Buy it at: Amazon, Audible, or your local independent retailer

Voracious reader, with a preference for sassy romances and happily ever afters. In a relationship with coffee, seeing whiskey on the side.

Uh oh. The heroine is starting to treat the hero horribly.

For me, there’s a DIK in here somewhere, but not as it appears on the page.

I started this last night and stayed up WAY TOO LATE reading.

First third–which is as far as I’ve gotten–gets a DIK from me.

Shupe always does well, so I’m looking to grab this one soon.

I’d have loved a cover with her in the tennis garb of the time! 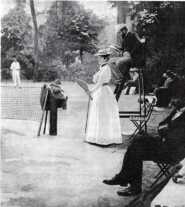 I’m with you guys. The publisher’s cover is SO AWFUL on so many levels. For goodness sakes, when you have an author who provides such interesting fodder for cover art and you can’t even be bothered to make an effort. Gah!

Sorry Kristen . . . meant to include “great review” and looking forward to reading the book DESPITE the ridiculous cover.

haha – thank you – but I got you completely. The book is thirsty FOR SURE, but I would have loved a different cover.

This sounds like my jam. I’ve loved some of her work so I’m happy to read this review!