A dangerous thing happened at my local thrift store over the weekend. 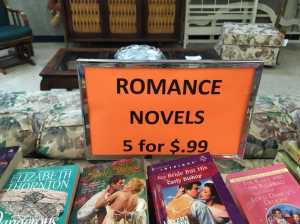 I exited the store $2.97 poorer (plus tax!) but fifteen books richer.

I was short on time, and the hardest thing was actually choosing which fifteen books to try. The choices were mostly vintage, at least twenty years old, and mostly obscure authors, although I did find a few more prominent names (Elizabeth Lowell, Jude Deveraux, Laura Kinsale). I had to start judging books by their cover and their blurbs, which every romance reader know is an enormous gamble.

I have so far been able to read two of the fifteen books I picked up. Which was a buried treasure, and which was buried for a really good reason?

A Desperate Gamble by Janice Bennett

Picked because: Working-class protagonists in a Regency – a maid and a Bow Street Runner!

Verdict: I liked it! The author has a way with dialect, which makes the wide social class range (from servants up to a viscount) in her book more vivid. It is also nice to read about a maid heroine who is actually working class, and not a baron’s daughter on the lam or a vicar’s daughter in disguise.

The heroine, Emma, finds the body of Sir Joseph in the library, and just about everybody the man has ever met seems to have a motive to kill him, including Emma herself. That’s my favorite kind of mystery – the one where the dead guy is completely unsympathetic. It’s a gentle mystery (no gore and horror, sort of Christie-esque that way) and I liked the calm professionalism of the Bow Street Runner hero Benjamin Frake. I could have wished for more chemistry between him and Emma, and some subplots within the mystery were not fully explained, but I recognize the challenge of telling a full and complex story while meeting those old Zebra word counts.

I’m going to have to look for more Janice Bennetts, even though they’re out of print. I mean, in addition to mysteries, she has two kitten-themed Regency anthologies (Autumn Kittens and Summer Kittens) and a book called Across Forever that seems to involve a painter heroine time-traveling to 1851 via a hot air balloon. This is a lady worth reading more of!

Verdict: The author’s prose isn’t awful, but her characters are. The heroine has a solid education (paid for by her mother’s prostitution) yet decides that her only job prospect is as a mail-order bride to the Yukon, which I think is overreacting a trifle. The ‘hero’ Cole is a total tool, positing that women turn to prostitution because they are too lazy for real jobs. I can’t tell you how often, after a long day of sitting at my desk, I’ve thought to myself, “This is so much harder than standing on a street corner soliciting strange men to enter my body and hoping none of them will infect or murder me, all the while avoiding police who would rather arrest me than the men driving this industry. Honestly, I’d quit tomorrow if I didn’t need the insurance.”

Anyway, after a riverboat shipwreck, Cole picks the city-girl heroine as his companion on a schlep to Fort Yukon because having her along to boink every night is more important than taking a partner with actual survival skills. Bonus points for the fact that after said hike, they have the energy for said boinking, and for a guest appearance by the Royal Canadian Mounted Police (unfortunately not involved in the boinking). Points off for the hero abandoning the pregnant heroine. He really is a douche.

The best part of the book was the really interesting depictions of life in the Yukon. The swarms of Arctic mosquitoes made me itch just reading about them, although the stinking lard cream the characters smear on themselves as a shield provides yet another reason to be dubious about all the boinking.

So what about you all? Have you discovered a book or anything else that was truly amazing (in both the positive and head-shaking senses of the word) at a thrift store? What’s the least money you’ve ever been able to spend on getting your romance fix? What’s your best obscure read? Enquiring minds need to know…

I admit I wouldn’t have been able to resist any of those Zebras. Ahh, the sweet, siren call of my youth.

Around Valentine’s Day of every year, our local Friends of the Library chapter has a massive used romance books sale where books are sold for $1 a bag. I generally grab books willy-nilly (for a buck a bag, even if only one book is a worthwhile read, you still only paid a dollar for it). I sometimes wonder, with the advent of ebooks, how long these used book sales will continue, seeing as fewer and fewer of us are buying physical books anymore. Otoh, I’ve read somewhere that romance books have the longest after-shelf life of any genre, with an average of six different readers post-purchase. Judging by the beat-up stare of many of the used romance books I’ve seen, recycling by multiple readers is standard.

I remember the Autumn and Sommer Kitten books. I ordered them with Better World Books as I don’t find older used regencies or historicals in used book shops in Germany. They are ‘nice’ books as I recall, just right for reading when you are too tired or stressed to read something more taxing.

That was the same feeling I got from her mystery. It was a comfort read. I’m always on the lookout for authors who give me that feeling because honestly, I’ve needed comfort these last couple years…

Early this summer, I visited the used book room at The Ripped Bodice. I bought the book with the craziest title and blurb. I cannot wait until I have time to read it.

In the 80s and 90s, before the internet took off and you could find almost anything you wanted to read on amazon or ABE, etc., I used to visit a local UBS or two in California when I was visiting from England. Sometimes I flew home with 30+ books! At that time you could not find Signet Regencies in the UK and I was so happy to discover and bring home books by Judith A Lansdowne, older Mary Balogh books, Edith Layton, Barbara Metzger and many others who were not published here. I was particularly glad to find Signet Christmas Regency anthologies which introduced me to so many now beloved authors. In fact, it was a chance purchase of one those tattered and ancient anthologies that allowed me to discover Signet Regencies. I doubt I ever came away from those stores with fewer than 5 books (carefully chosen and part-read in the shop to make sure they deserved space in my luggage!) and the most I remember spending was around $50 or so. And I thought it great value as it allowed me to indulge my ever lasting and continuing love of the Trad Regency.

Loved those Signet Regencies. Pre-internet, I used to scour used book stores and library sales for them. I would also order books from the publisher if I couldn’t find the books in a store. I think I ran through most of their catalog. It’s a shame that Signet no longer produces the regencies. I was introduced to several favorite authors by reading those books, including Mary Balogh, Edith Layton, Anita Mills, Dorothy Mack, Joan Wolf, Carla Kelly, Patricia Rice, Sheila Walsh, Patricia Oliver, Andrea Pickens, and Emma Lange. Some authors are still writing and have gone on to write longer novels for different publishers. Sadly, some of these authors have disappeared, but I’ve kept my favorite books. I understand Edith Layton’s daughter is working on reissuing her backlog in ebook format. Mary Balogh is also reissuing older titles in ebook format. I wish someone could reissue all those old signet regencies as ebooks, but I understand it’s a lot of work. I’d volunteer (I’m retired so have some time) , if someone could work out the copyright issues.

Signets are still nigh-on impossible to find over here, I think. I’ve bought quite a few used from Amazon, but haven’t found any in charity shops (second hand book shops are rare here – in the areas I’ve lived in, anyway). Fortunately, some are being republished digitally, but I’m sure there are still some real gems out there languishing out of print.