A Retro Write: Yes We Can! Our favorite Activist Heroines

Women have a long history of standing up for their beliefs, and there are great romance novels starring heroines doing just that. American and British suffragettes (or suffragists), Civil Rights activists, lawyers, writers, organizers, and military rebels – you’ll find all of them here, and more. Let these ladies inspire you to fight for your beliefs, whatever they happen to be.

Erica, a teacher, is tired of seeing funding diverted away from the neediest and most vulnerable. She protests at the hero’s (a Southern Republican senator’s) press conference and is dragged out by police. This book is set during the W. Bush administration and Erica is a strong reminder that black activists have been working continuously, even when out of the […]

Difficult to believe as it is, we’re heading into tbe back-end of the year now, as Autumn/Fall will shortly be upon us and we’ll be looking ahead to the books we want to curl up with on those long winter evenings! Before that, though, we’ve got the final days and weeks of summer to look forward to, and here are AAR staffers’ picks for the new releases we’re planning on spending that time with.  END_OF_DOCUMENT_TOKEN_TO_BE_REPLACED

There are a lot of romances we’re eager to read coming out in May, but there’s one real stand-out that’s sure to make a big splash, Helen Hoang’s follow-up to her hugely successful 2018 début, The Kiss Quotient. In The Bride Test, she takes the arranged marriage trope out for a spin and we’re sure it’s going to be another hit from this incredibly talented author.  END_OF_DOCUMENT_TOKEN_TO_BE_REPLACED

March brings another lot of exciting new releases, and as usual, AAR staffers have chosen the books they’re most looking forward to reading over the next few weeks.  We’ve a fairly broad range of titles for your consideration – mysteries, contemporaries, historicals, sports, paranormals, suspense – and would love to hear from YOU about what you think of our choices and which books you’re most looking forward to getting stuck into in the coming weeks! END_OF_DOCUMENT_TOKEN_TO_BE_REPLACED

Well, we’ve already chosen the books we’re most looking forward to reading in January and February 2019, and we’ll continue to update you with our regular monthly look at what’s Coming Soon… but what about what’s Coming Not So Soon?  AAR staffers have looked through the new release lists for the next few months and have picked the books we’re most eagerly anticipating in 2019.  END_OF_DOCUMENT_TOKEN_TO_BE_REPLACED

From the grey days of January into the grey days of February, (in my part of the world at least!) it’s the ideal season to curl up with a good book, your favourite snacks and tipple and settle down for a really good read! AAR staffers have picked the titles they’re most anticipating next month – among them a number of new historical romances from some of the biggest names in the genre, Lisa Kleypas, Lorraine Heath, Theresa Romain, and a very welcome return from Julie Anne Long.  As usual, though, we’ve got a fairly good mix of genres for your consideration including paranormals, mysteries, contemporaries, and inspirationals, so there should be something for everyone!  Have a look through our suggestions and then join in the discussion in the comments and tell us which books YOU’RE most looking forward to reading over the next few weeks.

Another month – another YEAR – and it’s time for another of our regular looks at the upcoming books we’re most excited about. It’ll come as no surprise that Sally Thorne’s 99 Percent Mine is at the top of many of AAR staffers’ lists of their most anticipated books; The Hating Game was such a huge success and we’re hungry for more! We’re saying goodbye to Annabeth Albert’s Out of Uniform series this month, with the release of the seventh and final book in the series, Rough Terrain, and welcoming a new series of historical westerns by Anna Schmidt with Trailblazer, book one in her Cowboys and Harvey Girls series AND a new sci-fi romance series with Nightchaser by Amanda Bouchet. END_OF_DOCUMENT_TOKEN_TO_BE_REPLACED

It’s that time of the year again when I have to agonize over which books to remove from a list that starts out as long as my arm. It’s a good problem to have, meaning I read wonderful books this year – poetry, nonfiction, general fiction, literary fiction, and children’s picture books as well as romance. However, for AAR, I have included only romance novels published in 2018; I will cover the remaining books on my personal blog. My choices include novels published from the beginning of January through the end of November; December works always get shafted in these lists.

So in no particular order…

A Princess in Theory by Alyssa Cole

Alyssa Cole is such a talented writer. I have liked everything I have read by her, and A Princess in Theory is no exception. This is […] 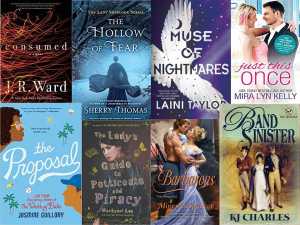 Here we are, heading into the back end of the year with our regular monthly look at the books we’re most excited about reading over the coming weeks.  As usual, this is just a small selection of the books released every month – we can’t include them all, so please drop by and let us know if you’re looking forward to something you think we should know about! END_OF_DOCUMENT_TOKEN_TO_BE_REPLACED

Teas and Books: A Perfect Match I came to tea early on in life after watching everyone around me drinking it for every occasion. Rise and shine: tea. Up too late in the night: tea. END_OF_DOCUMENT_TOKEN_TO_BE_REPLACED