Choose Your Own Path to True Love! Kitty Curran and Larissa Zageris talk about My Lady’s Choosing

Kitty Curran and Larissa Zageris are the authors of My Lady’s Choosing, a Choose Your Own Adventure – style romance novel set in Regency England – or maybe Scotland, or even Egypt, depending on your path! They joined AAR’s Caroline to talk about this humorous and affectionate homage to classic romances, and their own original twists.

Caroline: Thanks for taking the time to talk with us about My Lady’s Choosing!

LARISSA & KITTY: Thanks for inviting us!

What inspired you to pick romance for your interactive story’s genre? Are you romance readers?

LARISSA: Kitty has always been a romance reader, and I am more a romance watcher. I’ve always loved a strong couple in movies and TV, but the genres I tend to get consumed by in the book world are more mystery, sci-fi, and fantasy. I love an evenly matched couple, rooted in teamwork. And I love when those couples are fun and funny. I also love crossed genres, so anything remotely Princess Bride-ish, be it set on land or sea or space, counts as romance to me, and therefore I am into it. Kitty is the more classic romance reader of the two of us, and introduced me to some of her favorite titles as we started the writing process for My Lady’s Choosing.

Prior to that, a friend of mine found a very 80s American historical bodice ripper in a charity shop, which she bought mostly for the amazing clinching mullets on the cover. Books like this  were hard to come by in Ye Layte 90s London, so of course it made its way around the class within a week. It was genuinely terrible, complete with anachronistic names and purple prose galore. That said, while we all pretended to be enjoying it ironically, but by the time it got to me it was opening naturally at some very specific pages.

When I saw Minx in the import section at a central London bookshop, I picked it up hoping to have a similarly ridiculous read to share around class. Within a few pages I realised that this was funny on purpose, and by the end of the first chapter I was smitten.

I didn’t bring it into class, because I didn’t want something I had enjoyed so much to get laughed at. I did, however get my sister hooked as well. We pooled our resources, and assembled a solid shelf’s worth of romance in our closet by the end of it. 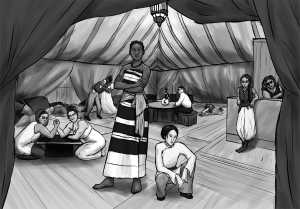 CAROLINE: The moment I read about an unflattering yellow dress, I wondered if a JQ in-joke was happening. Was I right? I think I also noticed Daphne du Maurier, Loretta Chase, and Charlotte Bronte. Are there specific influences or Easter eggs for romance readers you’d like to tease us with?

KITTY: You are 100% correct with the dress – it’s a reference to what Penelope Featherington is forced to wear during her early appearances in the Bridgerton series! Extremely well spotted.

CAROLINE: I’m really amused that an ugly yellow dress can be such a specific reference in Romancelandia.

LARISSA: du MAURIER FOR NOW! du MAURIER FOREVER! She had a pretty conflicted relationship with being considered a romance writer, though obviously a sort of tortured romance is threaded through all of her work. I think du Maurier was my biggest literary influence on this book. I read up on her as a writer a lot during the writing of this book – she is endlessly fascinating to me as a creative figure. She is a such an evocative but spare writer, and also has a lot of rage to express. She’s wickedly funny, as well. We perhaps went overboard with the du Maurier inspiration in this book. We thought we would be severely chided for naming the wicked butler character Manvers, but lo. Much like a paper-thin alibi that remains intact miraculously, our choices stand, wavering but strong! 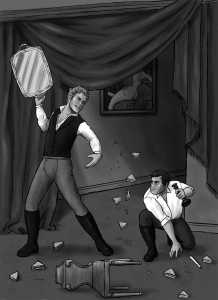 KITTY: We also made Benedict’s home Manberly, a mashup of Manderley and Pemberly. My personal favourites are the fact we managed to sneak in both “too stupid to live” and “the Duke of Slut” in there, for real romance nerdery.

LARISSA: There are many soft references to different books we love in this book, in the form of different archetypes you can play with and romance. While Kitty had a wealth of romance novels to draw on, and has read romantic circles around me, we never shied away from referencing the energy of TV shows and movies spurred by romance that one or both of us were big fans of, such as Miss Fisher’s Murder Mysteries or The X-Files. Early in the  writing, we even decided certain tracks would be ‘X-Files energy’ where it’s you and your hero working together, back to back, to figure stuff out. I think I was always a bit of a shipper before I even knew what the term meant. I always, ALWAYS love the kissing scenes in mostly anything. It’s funny I didn’t identify with being a romance reader sooner.

CAROLINE: I was an OG X-Files ‘shipper, and made my personal transition to romance via fanfiction, so I completely understand. It kind of sneaks up on you.

LARISSA: Yes! You realize they make a really strong couple before they even realize they’re a couple. And then you’re like, measuring all relationships to that one and realizing they come up short and if you just had one guy you could hunt aliens and government conspiracy confidently and competently with, you’d-

CAROLINE: Absolutely! Like you, I love partners. People underestimate how sexy teamwork is. A partner who complements your abilities and does exactly what you need exactly where and when you need them to… it’s almost like it’s a metaphor for something.

I wonder if “I watched X-Files for the aliens” is the romance reader version of “I read Playboy for the articles.”

KITTY: It’s one of those things, romance as a genre gets looked down upon so much that people don’t even try reading them because they don’t think of themselves as “that kind of person”. And I definitely think this is tied to the fact that this is a genre by women, for women.

It’s a real shame, because there is still a comparative lack in popular culture of anything that prioritises female wish-fulfilment and pleasure. I think that was what really hooked me in – guys get this as a default, whereas romance was the first place I found that was all about my enjoyment.

LARISSA: And our book is about enjoyment, hopefully for anyone who picks it up. We wanted to provide a world rooted in the spaces and flavors and characters romance readers already love and feel safe and supported in, while also opening the doors to that world to women and other genders within and without the typical binary to play in that world. It’s a romance, it’s a comedy, it’s a game.

CAROLINE: Yes, one of the interesting things about your novel is that among the many M/F options is an F/F storyline for the heroine, you, and also ways to have an F/F HEA for supporting characters. Can you talk a bit about that?

KITTY: We definitely tried to give the reader a wide spread of options so they could tailor the story to what they wanted, and our publisher was thankfully very cool with that. Part of the fun of a choosable path novel is picking what decisions you would have made in those circumstances. And as this was also a romance novel, we wanted to cater to everyone’s fantasies!

It’s been really great seeing how positive the feedback has been on the Lady Evangeline storyline. Queer romances in general are still so underrepresented in popular culture, especially with happy endings, and people are clearly crying out for them. There just aren’t enough sexy lesbian adventure stories out there!

Caroline: Do you have a particular favorite ending or a match-up you root for?

LARISSA: It’s going to sound like a cop out, but we worked hard at making each match-up sing in its own way. That said, Kitty loves her sweet museum-nerd Kamal, who you can meet in an offshoot of Evangeline’s adventures. I started out loving Craven, and now I root for everyone to take all of the side quests in this book. We’ve made this as much of an open-world romance as we can. There is satisfaction to be had everywhere you turn. Oh, and keep your eyes out for Nigel!

Caroline: And we close with that hot tip (it is always a good idea to keep your eyes out for Nigel, both in fiction and in life). Thank you for talking with us, Kitty and Larissa!

What do you think, readers? If you could pick any HEA, would you look for a paranormal? A nobleman? A Highlander? A scholar? Will you give My Lady’s Choosing a try? 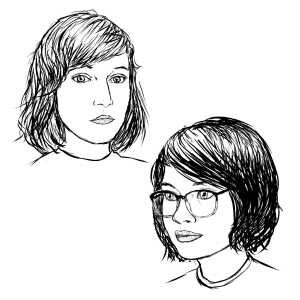 Kitty and Larissa are ardent consumers of trash, brooding men, and genre fiction. They write work that is sharp as a knife and soft as a secret lover’s kiss. Kitty also draws. They are co-creators of viral hit Taylor Swift: Girl Detective, and chroniclers of intrigue in all its forms. They live in Chicago.

This sounds like a lot of fun! :) I used to read Choose Your Own Adventure books all the time. At least this one looks as though it will be a lot less deadly than the ones I used to read. ;)

I used to read a couple paths just to find out what happened, and then go back to the path I really wanted to take. (“I know I really shouldn’t make the knight go into that cave, but I want to know what’s in there. Whoops. Back to page 32…”) So with this one, tThe big question will be… eBook version with links? Or print version so that I can bounce around?