My cozy mystery, Killer Chardonnay, features a vintner-turned-amateur sleuth named Parker Valentine and a dashing chef, Reid, who bring food and wine together in the most delicious way. When Parker isn’t busy solving murders, that is.

To celebrate my debut’s release, I thought it’d be fun to come up with food and wine pairings for some of my favorite literary couples.

Elizabeth Bennet and Mr. Darcy from Pride & Prejudice by Jane Austen—Spicy green curry and a dry riesling. For this quintessential couple, I chose flavors that, at first glance, don’t seem to make much sense, but actually fit perfectly together. After the curry sets your tongue on fire, soothe it with a refreshing splash of fruity white wine.

Feyre and Rhysand from the Court of Thorns and Roses series by Sarah J. Maas—Sinfully dark chocolate and a velvety syrah. Nothing says Feyre and Rhys—High Lord and Lady of the Night Court—like something purely decadent. Relish the way the bittersweet flavors of the chocolate and the jammy-ness of the wine are enhanced with each sip and nibble.

Alex and Henry from Red, White & Royal Blue by Casey McQuiston—Baby back ribs and pinot noir. I honestly debated here…something from The Great British Bake Off? A dish that looks fake and then turns out to be so very real? But in the end, it had to be the bold, tangy flavors of BBQ paired with the subtle, dignified notes of pinot.

Lucy and Joshua from The Hating Game by Sally Thorne—Fresh-picked strawberries and bubbly prosecco. Strawberries play an important role in the relationship between Lucy and Joshua, and what better to pair them with than something celebratory. Not to mention, the sweetness of the strawberries and sparkling notes of the wine play beautifully off of each other!

Emily and Colin Hargreaves from the Lady Emily series by Tasha Alexander—Charcuterie and smooth port. One of the best things about Lady Emily is how unconventional and independent she is, and how much her hubby encourages her behavior, even if it means a woman **gasp** studying antiquities and drinking port! Traditionally a dessert wine, it also pairs swimmingly with a plate of charcuterie, a mixture of flavors and textures as varied as this couples’ many adventures!

Dear readers, what food and wine pairings would suit your favorite literary couples? 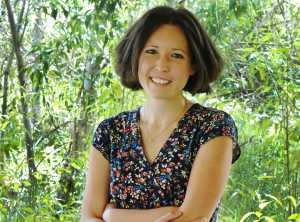 Author Bio: Kate Lansing is an award-winning short story author. She lives in Denver, Colorado with her husband, daughter, and a chair-napping tabby cat named Maple. Killer Chardonnay is her first novel.

About Killer Chardonnay: A young winery owner won’t let one sour grape ruin the bunch in the first installment of this exciting cozy mystery series.

Parker Valentine has always dreamed of opening her own winery in her hometown of Boulder, Colorado. But she gets more than she bargained for when a food and wine critic unexpectedly shows up at Vino Valentine on opening day. A negative review could be fatal for her business, and not only does he seem to hate her chardonnay, he also collapses and dies shortly after drinking it.

Although Parker hoped that the attendees would put a cork in it, soon her winery is at the center of a social media firestorm. With #killerchardonnay trending online, Parker’s business is in danger of closing, and she has no choice but to investigate the murder herself.

To restore her reputation, catch a killer, and keep her struggling business open, Parker needs only one thing: some good proof.

Buy it at Amazon

Tiffany and Leon in Flatshare by Beth O’Leary eat tons of leftovers (I remember a mention of mushroom stroganoff.) They will need to have wine on hand that goes with everything and I think a buttery Chardonnay would work well for that.

I loved Flatshare!! And what a perfect pairing for that couple!

Holy Guacamole, Batman! A post about almost all the things I love most in the world…food, wine, and books!

The first one that came to mind is Classic British Fish & Chips and Champagne, a nice dry Blanc de Blanc. fried food and sparkling wine is always a winner! In my mind this is a perfect metaphor for one of my favorite romance couples I have encountered…

from Judith Ivory’s The Proposition!

Ooh, I’m going to have to check out The Proposition because of how amazing your pairing sounds!! Love it!

Yum!! I admittedly haven’t read Outlander yet, but your pairing sounds so delicious!