Getting the Story: Reporters in Fiction 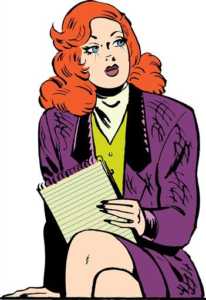 When I was growing up there was no way my family could financially afford my reading habit. Honestly, I think a drug addiction might have been cheaper. I was the kind of voracious reader that could on any given school night finish her homework and chores and still have time to finish an entire novel before bedtime. While other kids devoted their Saturday mornings to cartoon watching or playing outside, I was propped up in bed reading whatever I hadn’t finished the night before or starting something new. Sundays I would take the book to church with me so I could read on the drive there and back. The local library was seriously out of date but my mom was desperate and once or twice a week we would walk the streets of our sleepy downtown area and get me my “fix”.  It was through that lovely institution that I was introduced to the intrepid girl reporter via such novels as Dear Lovey Heart, I Am Desperate by Ellen Conford and Promises in the Attic by Elisabeth Hamilton Friermood.

I was thinking a lot about those books this week as I read These Shallow Graves by Jennifer Donnelly. It is the tale of Jo Montfort, a New York socialite attending Miss Sparkwell’s School for Young Ladies. She is the editor of the school newspaper, the Jonquil, which typically covers riveting, groundbreaking topics such as the proper way to brew tea and advice on how to fade freckles. Jo is determined to upgrade the quality of this fine periodical though, and she begins by including articles about issues like the abuse of girl laborers in local textile mills. But before the school can whip up a detention for such dissension, Jo winds up leaving the institution under truly sobering circumstances; her father has died as a result of a tragic accident that occurred while cleaning a gun.

Jo’s carefully planned out life is completely shattered by this event. Her pending engagement to Abraham “Bram” Aldridge, one of her oldest friends, is put on hold as her mourning period begins. She is kept home from school and it is unlikely she will ever return. Her days are spent glumly wandering the house as her mother mourns (as all book widows do) by elegantly becoming bedridden. Jo is being driven to distraction by grief and boredom when her uncle comes up with some errands to get her out of the house. It is when she is delivering a bequest to the Standard, the newspaper her father owned, that yet another blow is delivered.  For it is there that she overhears cub reporter Eddie Gallagher speak the unspeakable: her father’s death had not been an accident but a suicide covered up by her family’s money. Infuriated, frustrated and frightened, Jo begins to do a bit of sleuthing of her own to prove her father’s innocence beyond a shadow of a doubt but her research uncovers something truly sinister instead.

Donnelly’s novel is both a story of the struggle of the early years of women in journalism and a harsh coming of age tale. Jo learns, as eventually we all do, that our parents are not paragons but people with pasts that we sometimes wish they’d kept buried.  That doesn’t change the fact that she truly believes in the work journalists ultimately do – revealing truths, bringing injustice to the attention of the masses, and hopefully, getting society on the proper path to righting wrongs. Even though getting the story does damage to her own life, she ultimately feels the truth is more valuable than an elegant façade.

Jo’s story had me searching my reading logs for other recent novels about strong, female reporters. Sadly, they are woefully scarce. I absolutely loved Just One of the Guys by Kristin Higgins but that tale, while including a reporter, leans strongly toward humorous over suspenseful. Get Lucky by Suzanne Brockmann, an older book, came closer to being like These Shallow Graves in that heroine Sydney Jameson becomes embroiled in the hunt for a serial killer but was still a fairly light read. I struck gold however with three books I reviewed in the last few years for AAR. The Life I Left Behind by Colette McBeth

involves a television producer who worked on a true crime show called APPEAL which dealt with questionable convictions. Her desire to get the story and solve the case leads to her death. Normally that would be the end of the tale but in this case, it is just the beginning. Riveting, tense and emotional this is a not to be missed mystery.  Try Not to Breathe by Holly Sedon stars Alex Dale, a once up and coming reporter whose dependence on the bottle has led to a fall from grace. When her current freelance project leads to a decades old mystery, Alex finds her sleuthing skills making a resurgence as she tries to restart her career with the story of a life time. Alex’s personal struggles

make an intriguing backdrop to her investigative journalism in this mystery and I loved the fact that this cold case finally received the justice it deserved. The Widow by Fiona Barton underscores the role journalists can play in solving crime. Investigator DI Bob Sparkes and reporter Kate Waters work in tandem to unearth the secrets held by a suspected murderer’s widow in this fascinating look at family secrets.  Slower paced than most thrillers, this book still has an intriguing, engrossing and heartfelt saga at its core.

And now for some truly great news:  We have two copies of These Shallow Graves to give away to two lucky winners. Enter at Rafflecopter, and leave a comment with your email address so we can get in touch to arrange to send your prize.


Finally – what stories about female reporters are among your favorites? Can you recommend any recent, great romances (or mysteries) featuring journalists?

Courtney Milan’s _The Suffragette Scandal_ is perhaps my favorite female journalist romance. Not only is Frederica a journalist in it but she owns the newspaper as well and uses it for advocacy purposes.

I had forgotten that Elizabeth Camden’s newest From This Moment has a heroine who is an illustrator for a scientific magazine. There is a lot of interesting history in the story.

Candice Hern’s website describes the trilogy she wrote about the Ladies Fashionable Cabinet. “This series of 3 books involves a group of friends who work together on a fictional ladies’ magazine, The Ladies’ Fashionable Cabinet. All are introduced in Once a Dreamer, in which Simon, the hero, writes a column called The Busybody, as well as poetry and fiction. Edwina, the heroine of Once a Scoundrel, is the magazine’s editor. Her brother, Nicholas, writes historical and biographical essays and is the hero of Once a Gentleman, in which the magazine’s assistant editor, Prudence, also plays a key role.” I second the recommendations for the Loretta Chase and C.S. Harris books, and the Eva Leigh is in the TBR stack by the side of my bed.

Though not a romance (though there is a multicultural love story that eventually develops) I thought Tatjana Soli’s The Lotus Eaters was really interesting. It’s about a female photojournalist covering Vietnam.

I can’t believe I didn’t think of those!

Like LSUReader most of the ones that leap to mind for me are mysteries. I second the Jan Burke recommendation, Irene Kelly is one of the best written reporters out there. I also have liked the Paddy Meehan series by Denise Mina. Paddy is a young woman reporter in 1980’s Glasgow Scotland facing sexism in the newsroom – described by PW as “Mina may have invented a subgenre: moral suspense”. Warning, Mina’s books are not for the faint of heart, they are truly hard-boiled mysteries with desperate and dark doings – but incredibly well written. On the lighter side, and a series that definitely includes some romance is Carola Dunn’s Daisy Dalrymple series set in post WWI England.

I’ve searched my romance reading memory and really none stand out for me.

I’ve read all of Mina’s books. She’s so dark but there’s this strand of brightness in her worlds that redeems her books for me. I love this series.

In “The Last Hellion” by Loretta Chase, the heroine, Lydia Grenville, is a journalist and reformer. Perhaps not as recent as you’re looking for, but it is an excellent read, probably my favorite Chase book. (Yes, I like it better than “Lord of Scoundrels” for which it is a sequel.)

Not sure if And Then He Kissed Her by Laura Lee Guhrke would qualify here. It’s more publishing, but may interest people who want female reporters.

Maybe it’s a stretch, but Penelope of my favorite Bridgerton book, Romancing Mr. Bridgerton, is a reporter as Lady Whistledown. Also, Maya Rodale has a whole series about heroines who write for a paper.

I enjoyed ‘Forever Your Earl’ by Eva Leigh – the heroine is Eleanor Hawke, who runs her own periodical that is a Regency era gossip magazine. It’s the first book in the Wicked Quills of London series.

It’s not a romance, but Hero Jarvis in C.S. Harris’ Regency mystery series is a reporter of sorts. And by Regency, I mean the dark underbelly and societal upheaval part of the Regency, not Almack’s and Gunter’s for ices. C.S. Harris also wrote romances as Candice Proctor. There is a romance thread that goes through many of the books, so from that perspective, it’s good to read them in order.

Ditto one mine going blank with the protagonist being a female reporter. . .I suspect that professions just don’t stick with me.

ARGH. . .. I saw the typos right after I hit post — and quickly tried to correct before it went. . .

Interesting blog and of course my mind went blank about female reporters though I know I have read historicals about women who write for newspapers but of course under pen names.