by Myretta Robens and Cheryl Sneed

What happens when two die-hard readers of historical romance are set free in England for two weeks with a couple of credit cards, a rental car and a pair of vivid imaginations?

Well… you put quite a few miles on the car, incur quite a few pounds on the credit cards and compile a long list of adventures into the realms of historical romance.

We both read Historicals. We started out tied to the Regency and have cautiously crept into other eras. But England remains our spiritual home.

When the Republic of Pemberley, the Jane Austen web site we help run, planned its 2002 annual meeting in England, we drew up our vacation plans to include plenty of time for touring beforehand and headed for the airport. 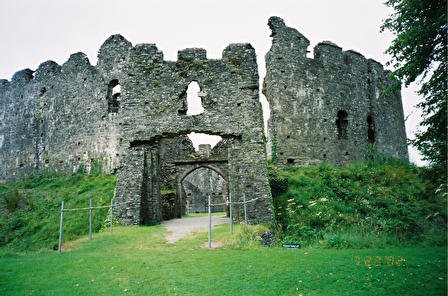 We began our trip in the 12th century with castles and keeps and moats (oh my!). As we spent much of our stay in Devon and Cornwall, we visited Restormel Castle in Lostwithiel, Cornwall. Built somewhere between 1100 and 1200, this stone keep eventually became the Duke of Cornwall’s castle. Between 1354 and 1365, it housed Edward III (The Black Prince). Although the moat had since dried up and the floors disappeared, we did think we saw a few Norman knights practicing their sword work in the forecourt. 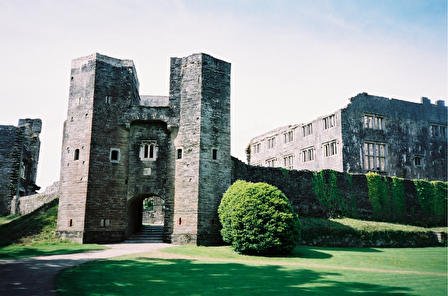 We stopped at Berry Pomeroy in Devon, a castle begun in the 12th century. Construction and expansion continued through the Renaissance. It was eventually abandoned in 17th century when the Pomeroy family could no longer afford its upkeep. The castle itself is a ruined mixture of several periods of construction and is said to be the most haunted castle in England. Although we did not run into any of the specters, we thought we heard a maiden in the tower of St. Margaret bemoaning her separation from the man she loved. 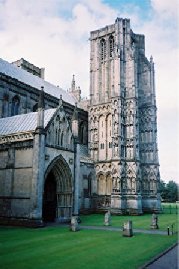 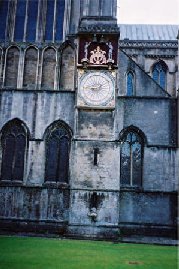 Lest we ignore the less secular side of these early, romantic centuries, we made sure to visit two of the era’s beautiful cathedrals. We stopped in Somerset at Wells Cathedral (left), built in 1180 when Henry II was on the throne and expanded between the 13th and 15th centuries. We stayed to listen to the Wells Clock (right). This famous clock was probably in place by 1390. It still has its original Medieval face, depicting a pre Copernican universe with the earth at its centre. When the clock strikes every quarter, jousting knights rush round above the clock and the Quarter Jack bangs the quarter hours with his heels. An outside clock opposite Vicars’ Hall, placed there just over seventy years later is connected with the inside mechanism. 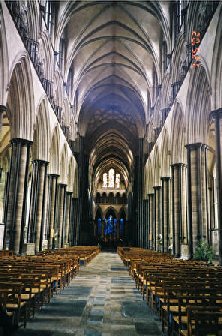 No visit to the Medieval era would be complete without a stop at Salisbury Cathedral and a visit to its Charter House where we read (or rather saw) one of the four copies of the Magna Carta still in existence. We thought more kindly of King John than we are wont to do during the reading of various romances in which he has appeared.

As we found the Medieval era a trifle cold and forbidding, we moved forward a bit to the Tudor period. There was much to see here, as Henry VIII was a pretty acquisitive kind of monarch. He seems to have simply taken whatever struck his fancy and, by the end of his reign, had over 60 royal residences.

We stopped at Hampton Court (below left) in Surrey, rumored to be Henry’s fourth favorite. This stunning palace was begun in 1514 by Cardinal Wolsey and acquired by Henry VIII in 1528 when Wolsey fell out of favor. 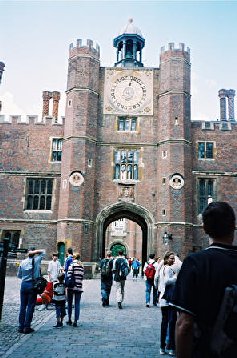 Strolling the magnificent gardens (directly below), it was easy to imagine each of Henry’s wives (in succession, not at the same time) enjoying the sunshine with their courtiers and ladies in waiting. 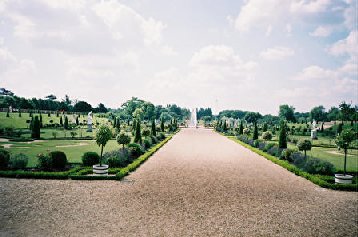 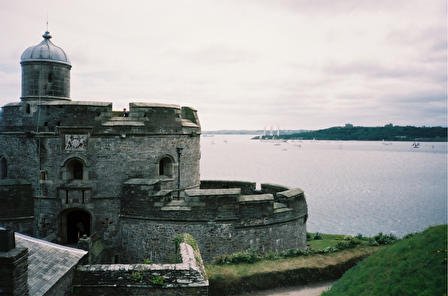 We took a couple of moments to check on Henry’s defense of the realm. Our stop on this part of the tour was at St. Mawes Castle in Cornwall. This castle, overlooking the Fal Estuary, remains almost as it was when Henry VIII built it and its sister castle, Pendennis, between 1539 and 1545.

We declined to descend the steep, narrow stairs into the bowels of the castle, but admired the estuary and the city of Falmouth from the lookouts and wondered how armed men navigated the interesting doorways. 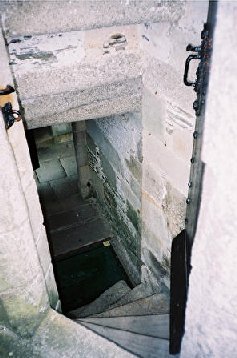 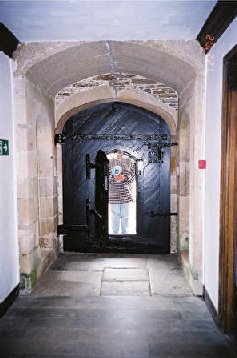 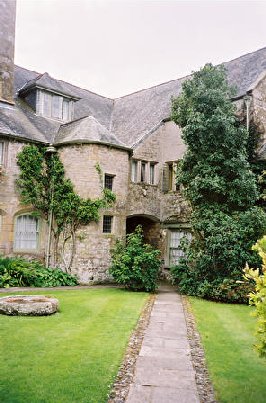 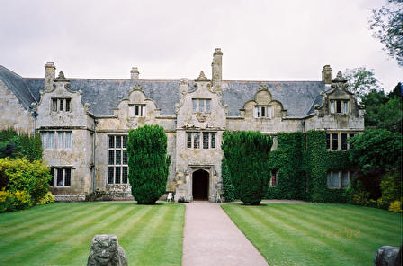 From Henry VIII, it was a quick hop to Elizabethan England. We found that architecture in this period was character-
ized by great halls, musicians’ galleries and lots of nooks and crannies. Our favorite was Trerice, a wonderful Elizabethan manor tucked away on the Cornwall coast near Newquay. Built in 1573, this smallish manor had lovely gardens and a small orchard right in the side dooryard. We both tried to woo the lord of the manor into installing us in the Great Chamber. Unfortunately, he had his eye on a duke’s daughter from Devon. 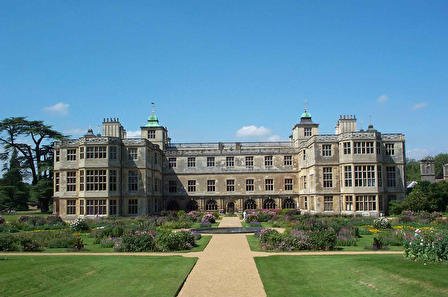 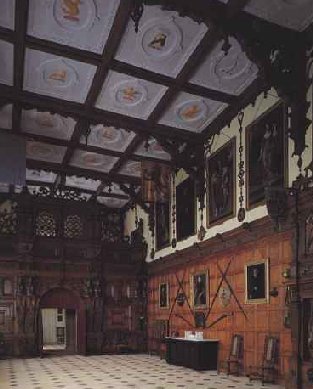 We found the politically volatile Jacobean period full of exciting plots and lovely homes. Audley End (directly above), built during the reign of James I (1603-1614) is one such gracious home.

The focus in Audley’s two-story Great Hall is an ornate Jacobean oak screen (above right) carved in high relief with grotesque masks and male and female figures.Queen Victoria has invaded some of Audley End’s rooms. We found her influence interesting if not as exciting as those Jacobeans. 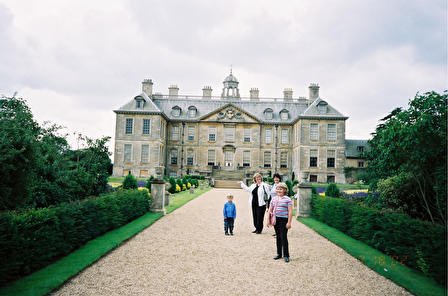 Our second Jacobean home, Belton House, was built in 1684 during the reign of Charles II. One of the loveliest parts of Belton House is the black and white tiled entrance hall and grand staircase that has recently been restored to its original splendor. Some might recognize this house as one taken over by Regency characters when it played the part of Rosings, the home of Lady Catherine, in the 1995 BBC adaptation of Pride and Prejudice. 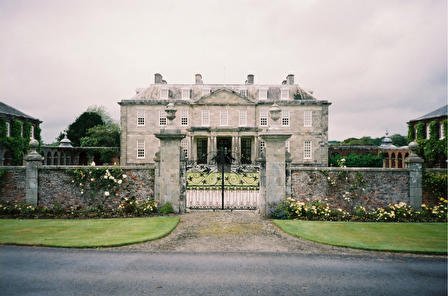 Leaving Belton House, we began drawing nearer to our first love, the Regency. But, we needed to pass through the early Georgian period in order to get there. This route took us to Antony in Cornwall, built in 1781 when George I was on the throne. The house sits above the estuary of the Lynher and is surrounded by terraced flower-beds and clumps of trees through which you can see down to the water. The house has a comfortable, lived-in feel. Not surprising as the Carews, who have been at Antony since the 15th century, still are in residence.

It is hard to imagine a torrid romance when the actual family is skulking about the place, but we did manage to conjure up Sir Alexander Carew (portrait on left) who was banished from the family archives for supporting the Parliamentary side during the Civil War but who has been rehabilitated by his family by having his defaced portrait restored and hung in the library. We could tell by his look, that Alexander was a romantic kind of guy. 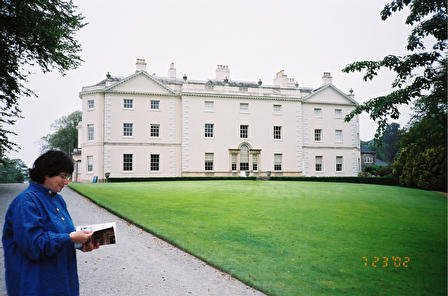 The building of Saltram (photo to the right) in Devon went on through the reigns of George II through IV. It is a felicitous combination of Palladian and Rococo, with many neo-classical interior touches as evidenced by the Robert Adam designs in the ground floor rooms. It is no surprise, then, that the end result is an imposing estate.

This is a house for grand romance. This is a house where the governess is swept from the nursery and relieved of her innocence in the Damask Room and later, made a countess, receives her guests in the Velvet Drawing Room. This is the house from whose grand staircase, Fanny Dashwood in the 1995 Sense and Sensibility looked down on the growing friendship between her brother Edward Ferrars and Elinor Dashwood. This is how one imagines the country estate of a peer of the realm.

After the long but interesting journey from the Norman Restormel through Medieval, Tudor, Elizabethan and Georgian England, we finally arrived at the Regency. We were home! Our time in London involved doing all the things any self-respecting Regency heroine would do. 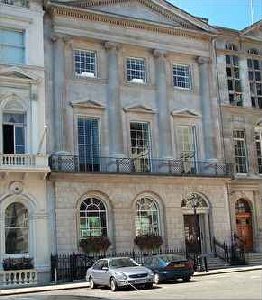 We set out from our home in St. James Square (at left) and walked through Mayfair (accompanied, of course, by our maid and footman). We called upon friends in Berkeley Square (below). 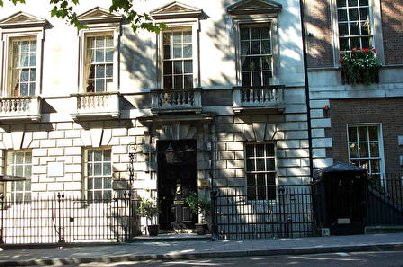 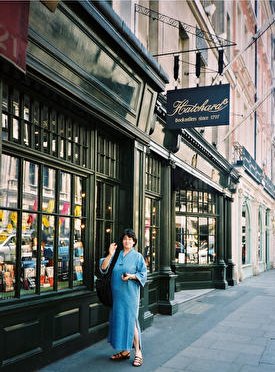 They were not at home, so we left our cards and retraced our steps, crossing Curzon Street and stopping briefly at Shepherd Market, we made our way to Picadilly and went into Hatchard’s Book Store to purchase the latest Minerva Press novel. Having made our purchase, we met with other friends for the latest exhibition at the Royal Academy of Art (below). 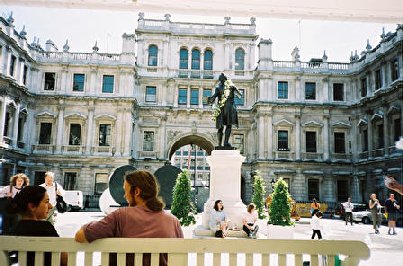 Of course, every heroine must visit The Tower of London. The menagerie is gone, but the required spectacle is amply replaced by the Crown Jewels. 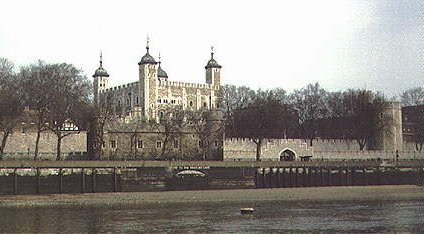 And every heroine must visit Astley’s Amphitheatre (usually with her younger siblings and the hero who is in the process of falling in love with her). We tried, but could not find the siblings, the hero or the amphitheatre. Alas. 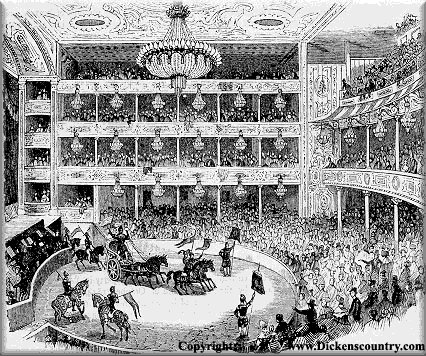 We sneaked into the British Museum without our hero and peeked at the Elgin Marbles. We were scandalized but titillated and were sorry that our hero was not there to accept our effusive… thanks.

Lack of hero notwithstanding, we could not resist making sure that St. George’s Hanover Square was available for our society wedding. It was. 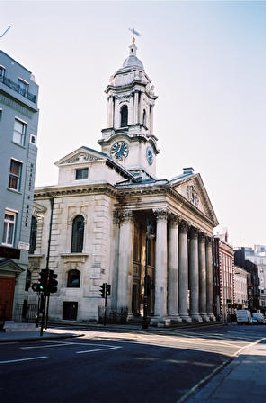 Although it was a bit worse for the wear on the outside, the inside of the church was subdued and elegant. We were assured by the Rector that not only was it perfect for our wedding, but the only American president to be married outside the United States was married there. (Do you know who?) 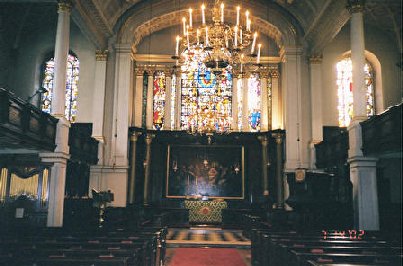 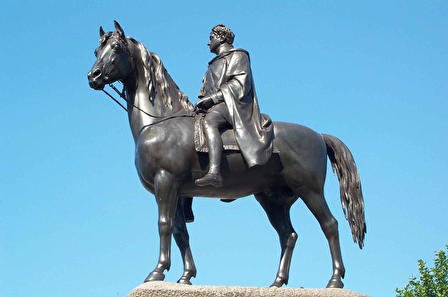 It was a sad day when we had to leave the Regency and, on our way out, we stopped by Trafalgar Square to say farewell to Prinny. Of course, we were not quite out of the Regency. We had gone to England in the first place to pay our respects to Jane Austen and we did so in fine style. But that is another story and we will leave you only with a peek into the Jane Austen sites that might be enjoyed by anyone with the inclination.

Myretta Robens co-authored our ATBF on Jane Austen and later authored a multi-month journal for us on her journey toward being published. Before joining AAR as a reviewer in 2004, Cheryl Sneed tied to win in our 2002 Purple Prose Parody Contest.