Introduction:
Myretta Robens is one of Pemberley.com’s main administrators (indeed, she runs the site’s server). I first “met” Myretta in 2001 when I asked her to participate in our Jane Austen At the Back Fence column, and the next summer she and another friend from Pemberley.com wrote for AAR about going to the U.K. for the annual Pemberley.com conference.

Myretta is not only a Janeite, she is a soon-to-be-published author of her first novel, a traditional Regency, to be released by Zebra in 2005 with a distinctively non-Regency cover.

We at AAR are overjoyed when friends become published, and it’s all the more exciting that, in addition to former AAR reviewer Megan Framption signing for her first traditional Regency, another good friend is to have a traditional Regency published.

I think publishing these writer journals (first Marianne Stillings’, and now Megan’s and Myretta’s) are helpful not only to prospective authors, but to readers in general in describing the journey toward being published. I hope you do as well. 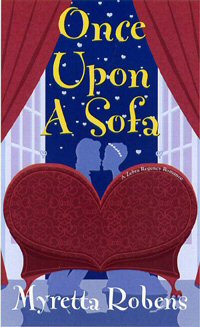 Continue to Myretta’s Journal in earnest