Greer Hendricks and Sarah Pekkanen talk about writing together

A few weeks back, AAR staffer Anne Marble stumbled across the news – via a Facebook post! – that bestselling authors Greer Hendricks and Sarah Pekkanen were to appear at her local library in Howard County. Having greatly enjoyed their books, Anne – like many other patrons that evening – braved the snow and attended the talk, keen to hear more about their collaborative process and what might be coming next. 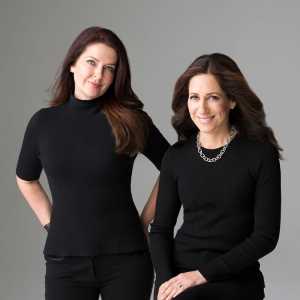 I read and loved The Wife Between Us, the first collaboration between authors Greer Hendricks and Sarah Pekkanen, and their latest book, An Anonymous Girl, was on the top of my teetering TBR pile. Both books were awarded DIK status here at AAR, so I was delighted to learn (through Facebook!) that the authors were due to speak at a local library event, and then, thanks to a local bookshop, would be signing books after their talk.

The authors talked about their lives, their friendship, their collaboration, and everything from how they may have scared hotel maids to the day they got the call from Hollywood. For nearly twenty years, Greer Hendricks was an editor at Simon & Schuster where she edited hundreds of books. One of her authors was Sarah Pekkanen, who had a background in investigative journalism. The two struck up a strong friendship, even though Hendricks lives in New York and Pekkanen lives outside of Washington, D.C. They are the same age and have many similarities – and many differences. So strong was their friendship that after leaving her publishing job, Hendricks confided in Pekkanen that she wanted to write a book.

Pekkanen surprised her by suggesting they write it together. Hendricks surprised her by saying she would have to think it over – but it didn’t take her long to agree. They realized they had many favorite books in common, novels with strong female characters and psychological elements. So they decided to write a psychological thriller. At the beginning, they maniacally wrote fifteen to twenty pages in twenty four hours. Then they read the results and cringed. The story took place in Chicago and started with a horse-drawn carriage. Admitting that still makes them cringe.

Of course, they tried again and hit gold. Part of the secret to their success might be the way they work together, which is unusual. Most authors who collaborate on a project do so by splitting the duties, writing alternating chapters or divvying up characters. This often leads to one-upmanship and books that fall off the rails. Hendricks and Pekkanen wanted to collaborate differently right from the start. They wanted to write every single sentence together. But how? Then Hendricks’ daughter said, “Mom, there’s something called Google Docs and Google Hangout.”

So the authors set a schedule, and started meeting online to plot and write their book. They treat this writing time as sacred, knowing not to make lunch dates, doctor’s appointments or whatever during those hours. If they started breaking into the writing time, they’d never get anything done – they even schedule their bathroom breaks!

They visit each other once a month. While writing The Wife Between Us, they started meeting in each other’s cities, although now they meet in hotels in Philadelphia. They work twenty hours together, wearing exercise clothing while they plot out the chapters with giant Post-It notes stuck to the walls of the hotel room.

This is where they scared the hotel maid. Hendricks is neat, Pekkanen is messy. She also didn’t spring for the more expensive Post-It notes. One time, Pekkanen was in a rush and forgot to take down the huge notes from the walls of the hotel room before checking out. Post-It notes that were covered with ideas of how to kill somebody. Imagine a maid coming into a room and seeing it plastered with ideas for murder, like a scene out of Homeland! Hendricks jokes that they’re lucky the hotel allows them back. However, while Hendricks knows how to use Google Docs to estimate their daily word count, Pekkanen can guess it with eerie accuracy.

When writing, their favorite question is “What if?” The authors also pull ideas out of newspaper stories and studies they come across, although they’re careful to avoid falling into rabbit holes of news articles and studies. When they first start to work an idea, “It’s like we’re creating a collage and pinning things to it.” Then they figure out the characters who will inhabit that world. Pekkanen doesn’t believe in writer’s block, but she does believe that there are stumbling blocks. Those blocks can be an excuse, or there can be something behind it. Sometimes the blocks are telling you something.

They aren’t afraid to bounce ideas off each other. Brainstorming is a “safe place” where they know they can say anything to each other. There are no bad ideas. Pekkanen admits, “If I come up with an idea Greer doesn’t like, she’s very diplomatic. She just doesn’t say anything.” Sometimes they have an idea about how it’s going to end, but then it often changes. For example, Part three of The Wife Between Us was originally going to be told in letters, and they sold it to the publisher that way. When they write, they find themselves planting connections they don’t realize until later, and that can help them create those great plot twists.

The authors admit that it’s a mystical process, a melding of minds, but they try not to think about the process too much; if they analyze it too much, it might just might stop working. They believe that they are “better together.”

And as fans of The Wife Between Us know, the process worked really well. The book was published to great reviews and hit the bestseller lists,  and Hendricks celebrated the success by having matching necklaces made for them with a stone that matched the color of the cover.

They later learned that they broke a lot of the rules, and they admitted “We didn’t know what the rules were.” They made their characters relatable, even if not necessarily likeable.

With An Anonymous Girl, they went for immediacy, even writing parts of the book in the second person. This way, the reader feels like they are one of the subjects of the psychological experiment, and are compelled to answer the questions, just like the character. They wanted to delve into the psychologist/patient relationship. What do psychologists feel about their patients?

With stories like this, it should be no surprise that Hollywood also has its eyes on Hendricks and Pekkanen. E1, the company behind the Sharp Objects miniseries, has optioned on An Anonymous Girl for a TV series. The Wife Between Us was optioned by Amblin before they even finished writing it. The studio loved Part 1. “They loved it!” Then they sent them Part 2. Silence. They sent them Part 3. Silence.

After it was published, they met with Amblin. There, they learned that screenwriters kept trying to adapt the book but couldn’t get the twist right. So Hendricks and Pekkanen were asked if they wanted to try. First, they Googled “how to write a screenplay.” Then they did a pitch over the phone – and they got it! They love doing the screenplay, taking the elements they know so well and telling the story in a visual way.

The question and answer session was fascinating not just because of the things the authors had to say, but also because of the variety of questions asked. One person asked the authors how they choose the covers – it’s easy to forget that most people don’t realize authors don’t choose the covers. They also discussed their relationship with their editor, and how long the publishing process can take.

They also credited the marketing department at St. Martin’s Press for creating so much buzz for their books. St. Martin’s goes beyond the traditional social media posts. They have also experimented with everything from mailing ARCs to fans and sending out clever “reminders” to fans (lucky fans got an egg-shaped beauty blender!) to an on-line quiz.

Kudos to the Howard County Library System for not just hosting this event, but also running it so smoothly. Also, many thanks to Books With A Past for making it possible for so many people to get signed copies of both books. Two of my friends will be getting personalized books as gifts!