A Guest Post and a Giveaway from Scarlett Cole

I am so excited to be here at All About Romance to share with you a little about my latest release, Final Siege, which is the second book in my Navy SEAL Love Over Duty series.

One of the great things about writing a new series is deciding where to set it. Sometimes, the setting comes to you while you are right there. I came up with the Second Circle Tattoos series while lying on a poolside sun lounger at the W hotel in Miami, where I ultimately set the series. My Preload series was set in Toronto because I lived there for fifteen years and I LOVE the city. With Love Over Duty featuring ex-Navy SEALs who set up their own special forces firm, I knew these boys needed to be near water. And I wanted them to have local roots. So, just like the old school rap battles of old, it was east coast versus west coast. Fate played a hand in the decision when the Romance Writers of America conference was held in San Diego, allowing me the chance to experience this fabulous military city for myself.

San Diego’s relationship with the military goes back decades. Now synonymous with this city, visitors can’t fail to notice the military presence and numerous historical monuments and places. Only in San Diego, can you see Fighter Jets and Ospreys fly overhead, warships and massive aircraft carriers docked at the piers, and Navy SEALS training on the beaches. I was very fortunate to be invited onto the Naval base by a Commander in the US Navy and got to witness Basic Underwater Demolition/SEAL (BUD/S) training first hand. That’s me on the beach where all those grueling training exercises take place.

Although the first presence of the US Navy at San Diego’s shoreline dates back to the early 1900s, it wasn’t until after World War I that San Diego became a central force for the US Navy.
Home to thousands of military personnel including members of the Coast Guard, the Marines, Navy SEALS, and the Navy’s Blue Angels, it’s obvious that the Navy is at the heart of San Diego. It is, without a doubt, a military town.

Naval Base San Diego, is the largest base of the United States Navy and is home to over 20,500 military personnel including U.S. Coast Guard and marines and 6,000 civilians. During the early 1920s, a small area of partially submerged marshland was developed and eventually became a modern Navy complex and homeport to nearly a third of the Navy’s fleet in the Pacific theater. Today, Naval Base San Diego is a city within a city and provides the same services as any metropolitan district.

San Diego is full of naval tourist attractions and monuments, and the annual Fleet Week San Diego sees thousands of visitors turning out to watch parades, demonstrations, and visit exhibitions and shows. It is also featured in the movie Top Gun. Tom Cruise trains at the Navy’s Fighter Weapons School at MCAS Miramar, and you can still visit many local filming locations such as Kansas City Barbeque where the memorable jukebox serenade takes place with Kelly McGillis.

Just up the coast from San Diego is Encinitas. It also happens to be where my friend, Jane, lives, and I decided that was where my heroes spent their childhood. So, I hopped on the Amtrak and went to visit her. The places that appear in Encinitas in both Under Fire and Final Siege exist in real life. The ornate movie theatre entrance, the meditation garden, even the yogi practicing his yoga on the water’s edge are all real people and places. The photo of me by the yellow house was a home I found on a property rental website, and I made it Sixton Rapp’s home!

So, that’s how I came to choose why Final Siege was based in and around the San Diego area. Watch for those landmarks as you read Mac and Delaney’s steamy second chance romance! Happy Reading! 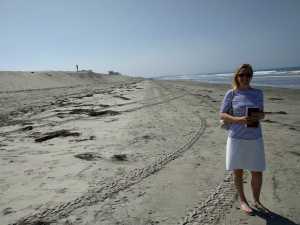 The tattoo across my right hip says it all really. A Life Less Ordinary. Inked by the amazingly talented Luke Wessman at the Wooster Street Social Club (a.k.a. New York Ink). Why is it important? Well, it sums up my view on life. That we should all aspire to live a life that is less boring, less predictable. Be bold, and do something amazing. I’ve made some crazy choices. I’ve been a car maker, a consultant, and even a senior executive at a large retailer running strategy. Born in England, spent time in the U.S. and Japan, before ending up in Canada were I met my own, personal hero – all six and a half feet of him. Both of us are Scorpios! Yeah, I know! Should have checked the astrological signs earlier, but somehow it works for us. We have two amazing kids, who I either could never part with or could easily be convinced to sell on e-bay.

I’ve wanted to be a writer for a really long time. Check through my office cupboards or my computer and you’ll find half written stories and character descriptions everywhere. Now I’m getting the chance to follow that dream.

I love hearing about how authors get inspired to write certain stories.