A guest post and a giveaway from Kate Carley

When was the last time you hung out with your best girlfriends?

For me, it seems as if it’s been ages ago. The fact is, I tend to be a bit of a homebody, and it’s a wonder that I ever get out with my friends. But once we’re all together, I ask myself why we don’t do this more often—dinner, drinks, maybe even some shopping—to reconnect. Family, work, home all make the top of the priority list, don’t they? That is often our reality.

In romance novels, however, girlfriends are always a huge part of the story. They are the glue that holds the heroine together when she feels that her world is unraveling. They are her cheerleaders for her new relationship, encouraging her to dive in and love without bounds. And they are the first ones to embrace her when her dreams crumbles into a thousand little pieces. It seems as if they are always there whenever the heroine needs them. Couldn’t we all use friends just like that?

As a reader, I’ve always loved that aspect of contemporary romance, and I often imagine those friends starring in a romance story of their own. Everyone should get their shot at happily ever after, right?

When I set out to write Helping Her Remember, I simply had to include those types of friendships that my heroine could rely upon. In my opinion, they add depth to the story, as well as the possibility for future stories. In Helping Her Remember, Kelly Anne Leeson has been away from Crawford Falls for more than seven years. When she left, she turned her back on all her friends. The time has come to right those wrongs of the past, and it all starts with a couple bottles of wine and a bag of Funyuns.

Keep reading for an exclusive excerpt from Helping Her Remember.

Lacey pointed to the bags still clutched in Kelly’s hands. “What did you bring me?”

“Oh, here.” She set one bag by the door and one on the table. “This bag is yours and the other one is for Brynn. I have to stop over there next.” Kelly shoved the bag across the table, so Lacey could peer in.

Her friend pulled out the two bottles of white zin and the snacks, spreading them out on the kitchen table. “You are not leaving me to bring that bag to Brynn.” She snatched up her cell phone from the countertop by the stove and hit speed dial. “Get your skinny ass over here.”

Apparently, Brynn was making some sort of fuss on the other end, because Lacey said, “I don’t care if you’re tired. Kelly and her baby pooch and stretched out pussy are in my kitchen, and we’re going to have a couple bottles of wine.” Kelly rolled her eyes at the pussy comment at the same time she did a few Kegels. Just in case Lacey’s mom was right.

A short time later a car pulled up outside, a door slammed, and then there was a hesitant knock at the door before Brynn poked her head in. She looked cautiously over her shoulder and gave a small wave as she closed the door behind her.

“You got a ride here?” Lacey asked, sounding rather perturbed at the idea. “Please don’t tell me he didn’t trust you to drive across town.”

Brynn simply shook her head. “You said something about drinking wine. And what’s this about a stretched-out pussy?” Her eyes landed on Kelly’s face, and then she was closing the gap and pulling Kelly into a long embrace. “Kelly, it is so good to see you after all these years.”

Tears sprung to Kelly’s eyes at the complete show of affection from her friend, even before Kelly had bothered to admit all she’d done wrong and ask for forgiveness. She repeated the apology to Brynn, which felt a bit awkward seeing as how those were the exact same words she’d given Lacey not even thirty minutes ago. But both women seemed genuinely okay with things, so they got down to the business of uncorking two wine bottles.

They’d just settled at the kitchen table, wineglasses filled to the brim, when Kelly noticed the ring on Brynn’s left hand. “My God, look at that rock!”

Brynn, with her understated elegance, held her hand in front of her as if she were as startled by the big-ass diamond sitting on her ring finger as Kelly was. “We just celebrated our two-year wedding anniversary. His name is Emmett.” Her friend’s smile lit up her green eyes.

“And he’s a complete asshole.” Lacey took a huge gulp of wine, seemingly unrepentant about airing her opinion.

“Wow, Lacey, don’t hold back now,” Kelly said, darting a glance at Brynn and wondering how she felt about Lacey’s point of view.

“No, it’s okay. We love each other, and that’s all that matters,” Brynn said, waving her hand in the air in front of her as if she were unconcerned with anyone’s thoughts on the topic. She tucked a shiny wave of auburn hair behind her ear. “You’ll meet Emmett eventually. He’s extremely shy, so he has a hard time letting his guard down around new people. And his excessive cautiousness regarding my safety seems to ruffle a few feathers.” Brynn cast a dark glare at Lacey before dissolving into a bright giggle. They’d obviously had this discussion before. “Emmett doesn’t like when I leave the house like this at night.”

“Or when we go out during the day.” Lacey appeared to have a list of complaints. “And he doesn’t like me. He thinks I’ll lead his dearly betrothed into behavior unbecoming a lady of means.” Kelly had clearly missed out during the course of her absence.

“So, I take it from the pooch and pussy comment that you’ve had a baby.” Brynn cocked her head to the side, listening while Kelly filled in the missing details for her friend and shared a brief story about life with a six-year-old boy. Intentionally, Kelly avoided the topic of AJ’s paternity. But there was just something about living in a small town that left everyone believing they had the right to ask. “Tell us all about your baby’s daddy,” Brynn said. 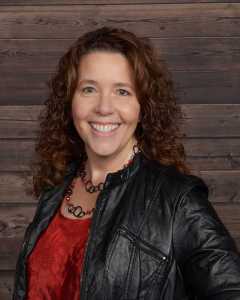 Kate spent seven years working as an IT professional before ‘retiring’ to stay at home with her two little boys. Now–two more children and two decades later–Kate is launching her new book series: Changing Krysset.

When Kate isn’t writing, she’s cooking for her brood. Late at night, you’ll find her curled up by the fireplace reading a romance novel.

Kate lives in the Midwest with her husband of twenty-seven years and their four children.

Kate is giving a $10 Amazon gift card and a digital copy of Helping Her Remember to one AAR reader. Make a comment below to be entered in this drawing.

Women’s relationships with their friends are sometimes more telling than their choices in men. I love reading about women with supportive, loyal friends. Small town romances about that group of friends–those books are my catnip. Can’t wait to read this one.

I always enjoy reading about strong female and male friendships. You learn so much about the hero and heroine from how they interact with their friends and who they befriend.

(I’m ineligible for the giveaway.)

This seems like a timely book. Strong women and strong relationships are important.